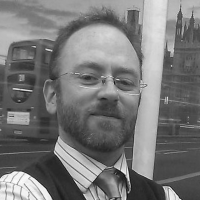 The Blogs
Brian Frydenborg
Outside-the-box journalist and academic who understands the box
Apply for a Blog
Please note that the posts on The Blogs are contributed by third parties. The opinions, facts and any media content in them are presented solely by the authors, and neither The Times of Israel nor its partners assume any responsibility for them. Please contact us in case of abuse. In case of abuse,
Report this post.

What Is New, What Is Old in Latest Israeli-Palestinian Tragedy

The more you become familiar with the Israeli-Palestinian conflict, the more banal you realize it truly is.  One tribe with an extreme emotional attachment to a special religious site will become enraged and violent when another tribe with more control over that site and a competing extreme emotional attachment says or does something involving that site; then, a mob is ready to riot, with a countermob ready to riot back and various extremist government security forces and terrorist extremist actors ready to capitalize to further their maximalist positions.

Whether cavemen fighting over a sacred stone 20,000 years ago or Jews and Arabs fighting over the Western Wall/al-Aqsa Mosque/Dome of the rock compound in the Old City of Jerusalem, little changes: particular plots of land or certain building are weaponized and control of and access to them become tools of conflict between different competing ethnic/religious groups.  “Taking back” what is “ours” justifies all sorts of horrors, from suicide bombing and ethnic cleansing to war and genocide.  Without religion involved, there is still plenty to fight about in petty, repetitive ways, but research demonstrates that the viciousness of such conflict gets worse when religion is involved.

This is the utterly unoriginal politics of much of the world, which even explain many of the animating forces behind Trump’s recent Capitol insurrection in America, as I noted for The Jerusalem Report.  Even within specific conflicts, chapters can also be especially repetitive, and that is certainly the case here between Israel and the Palestinians: the current round of rapidly escalating violence began in ways remarkably similar to how the Second Intifada began in terms of the involvement of heavy-handed Israeli actions at al-Aqsa while also resembling in other key ways the outbreak of the 2014 round of violence even as it also thematically touches core issues that sparked conflicts going all the way back to the First Intifada and the major wars dating back to Israel’s founding.  The same holy sites, the same arguments over whose land it was, is, and will be—weaponizations of history for the present and future—the same arguments over occupation and settlements, equality and dignity, discrimination and freedom, security and sovereignty are always there with few variations and mostly played on the same tired notes.

So in important ways, there is nothing new here: the same unresolved issues, the same powers that be not even trying to advance or resolve them or even making them worse, the same systemic negative feedback loop producing the same outrage, fear, grievance, hatred, dehumanization, and violence that certain leaders on both sides keep capitalizing on to justify their extremist, exclusivist ideologies and policies.

During this latest of the cycle, some Arab citizens of Israel—many considering themselves primarily Palestinians, some considering themselves primarily Israeli, some having nuanced, mixed views of their identities—have been both attacking Jews and been attacked by gangs and mobs of Jews as mixed communities in Israel are seeing an explosion of intercommunal violence.  In my own time in Israel, Palestine, and Jordan, I found these Arab citizens of Israel to have the most nuanced and least predictable views on the conflict.  Yet of Israeli Jews and Palestinians without Israeli citizenship (including the many Palestinians I met in Jordan), the vast majority were almost entirely one-sided in their views.

Throughout the other conflicts and wars of the past, Arab citizens of Israel have simply stayed out of the fights between Israel and Palestinians and/or Arab states.  Though discriminated against in many ways, Palestinians living in Israel’s internationally recognized pre-1967 borders have vastly more freedoms, rights, and opportunities than Palestinians in de-facto annexed East Jerusalem and especially the Gaza Strip and the West Bank (very few of those in East Jerusalem and none of the Gazans/West Bankers are Israeli citizens or can vote in Israeli national elections; those in the West Bank are subject to a military occupation and Israeli military law at any time Israel chooses to exercise it, and those in Gaza are also subject to intense Israeli restrictions in the something of a giant open-air prison Gaza has been for years).

As in the U.S. with the Black Lives Matter movement, an extraordinary coronavirus year fostered increased social media consumption and allowed for way too much time to stew with unpleasant thoughts, contributing to a tinderbox-like readiness to engage in street activism and releasing pent up rage, so that many who normally would not get involved in protests have become protesters, with protests becoming more violent.  Add to the equation that this is all after a rough month of reflection and fasting during the holy Islamic month of Ramadan in the time of COVID-19, after over a year during the era of peak social media activism during COVID-19 lockdowns (the pandemic medically and economically hitting discriminated populations harder all over the world, in this case Israeli Arabs), after years of Israeli Prime Minister Benjamin Netanyahu and conservative Israelis failing to address inequality and discrimination against Israeli Arabs while catering to Jewish right-wing extremists in continuing with discriminatory policies and racist rhetoric in Israel (the Israelis in power being perpetual sore winners and crowing loudly over symbolic wins like Trump’s recognition of Jerusalem as Israel’s capital).

So now these Israeli Arabs have seen their sense of identity drift more towards Palestinian and seen a hostility within them grow towards their right-wing Jewish antagonists.  In the face of sustained extremism and discrimination from Jewish extremist politicians and citizens, they are now responding in kind.  In the past, there has been violence between Palestinians and groups of Israeli settlers living in illegal Israeli settlements in the West Bank and, earlier, Gaza; the run-up to the war in 2014 (which I analyzed in detail at the time) involved the kidnapping and murder by Palestinian terrorists three Israeli teens–Naftali Frenkel, Gilad Shaer, and Eyal Yifrah—and the kidnapping and murder by Jewish terrorists of a Palestinian teen from East Jerusalem, Mohammed Abu Khdeir.  But now, there is the worst intercommunal violence inside Israel proper in decades.  Much like some groups of Jews and Arabs began fighting each other in British Mandate Palestine in 1947 in the beginning of civil war, the current violence between Jews and Arab Israelis has senior Israeli officials and others in Israel worried about the prospect of a new civil war.

In a polarized society, when one side or faction becomes too extreme, over time it can often help generate an increase in extremism in other groups.  As an example, most factions in Syria’s current Civil War have become radicalized competing with, or fighting against, the brutality of both terrorist ISIS and dictator Bashar al-Assad’s mass-murdering regime helped bring out the worst in other factions over time, as I discussed years ago.  After years of the radicalization of the right in the United States, elements of the left are also becoming more extreme (though still not coming close to the insanity of Republicans), as I have also discussed.  So this is hardly unique to Israel, but as Israel lurches rightward and many of its Jews become radicalized, it was only a matter of time before portions of Israel’s Arabs started down a similar path (anyone wanting to understand these dynamics should watch the singular Israeli/HBO miniseries “Our Boys,” about the aforementioned four murders of teens that led to the 2014 Gaza war).

I and the public know

What all schoolchildren learn,

That to whom evil is done

Do evil in return.

If anything, this epigram is all too fitting, for the world and for the tragedy unfolding in Israel and Palestine today.

Originally published on my site Real Context News on May 14, 2021; see my relevant Twitter thread and follow-up article Wading into Israel and Palestine Quicksand, Biden Offers a Diplomacy 101 Class for All.

Please do not hesitate to reach out to him with any comments, criticisms, or suggestions.

About the Author
Brian is an American freelance writer, analyst and consultant who lives in Silver Spring, Maryland; hails from the New York City area and has spent the last two decades studying, writing about or working in policy, politics, international development and humanitarian aid. He lived in the Middle East from 2014 to 2019. You can follow him on Twitter (@bfry1981) and see much of his work on his news website, realcontextnews.com
Related Topics
Related Posts
Comments