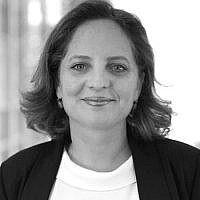 The Blogs
Carole Nuriel
Apply for a Blog
Advertisement
Please note that the posts on The Blogs are contributed by third parties. The opinions, facts and any media content in them are presented solely by the authors, and neither The Times of Israel nor its partners assume any responsibility for them. Please contact us in case of abuse. In case of abuse,
Report this post. 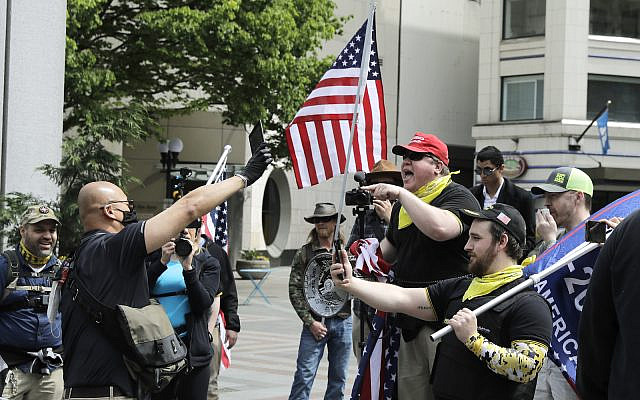 Members of a group wearing shirts with the logo of the far-right Proud Boys group at right, argue with a counter protester during a small protest against Washington state's stay-at-home orders, Friday, May 1, 2020, in downtown Seattle. (AP Photo/Ted S. Warren)

In recent weeks, people in the US have been taking to the streets to express their frustration over the government’s social distancing policy. In some cases these protests have taken on dark tones, with the participation of extremist elements, challenging the federal government’s authority, demonizing national- and local-level politicians and even implicitly threatening the state’s democratic institutions and leaders through the display of guns.

Such extremist groups include the Three Percenters, whose members have attended events in Michigan, Oregon, Kentucky, Ohio, Illinois and California. This group is an offshoot of the anti-government Militia Movement, which is driven by the belief that the government conspires to strip citizens of their basic rights, specifically the constitutional right to bear arms, and enslave them as part of a “New World Order.”

Members of this movement tend to compare themselves with the colonists who fought the British during the Revolutionary War, whereas the Three Percenters believe that only three percent of colonists actually participated in the fighting and achieved victory for all. Most importantly: both view the government as the enemy.

Another such extremist group, this time an unconventional far-right one, is the Proud Boys, whose members have attended rallies in Nevada, Oregon and California. Even though the group holds xenophobic, misogynistic, Islamophobic and transphobic views, it strongly rejects allegations of racism and its members do in fact come from a variety of ethnic backgrounds. They have become a prominent force within the “alt-lite,” a loosely connected network of activists which share the alt-right’s hatred of immigrants, feminists and Muslims; but who diverge from it in their rejection of white supremacy.

Both the Three Percenters and the Proud Boys are anti-government groups who viewed the anti-lockdown protests as an opportune moment to spread their message. That is, not just against corona-related restrictions, but rather their anarchist message fundamentally rejecting the government’s authority.

There were also instances in which participants in these rallies demonized the politicians imposing the restrictions. In Illinois, for example, protesters carried signs containing Nazi slogans and imagery referring to the Jewish Governor J.B. Pritzker’s corona-related policy: one sign included a swastika and read “Heil Pritzker,” while another read “Arbeit macht frei” (“work sets you free”), the slogan that appeared on the gates of Auschwitz and other concentration camps.

Protestors in Michigan held signs comparing Governor Gretchen Whitmer to a Nazi, while protestors in California referred to Governor Gavin Newsom as a “Tyrant.” This last example of referring to state policies or to politicians as tyrannical might seem insignificant to some, but it is in fact a practice deliberately used by anti-government groups aimed at framing the state of affairs in a way intended to encourage resistance.

And there were guns in some of these rallies. To be clear: guns are prevalent in the US and it is hardly surprising to find them in rallies. However, their display against the backdrop of defiance of state authority and the demonization of politicians makes them a very concrete danger. This became clear when, on 30 April, armed protesters stormed the capitol building in Lansing, Michigan, demanding to lift corona-related restrictions. It should also be borne in mind that displaying guns at nominally non-violent protests further normalizes their presence in civilian rallies.

One could ask why this is important. After all, anti-lockdown protestors represent a minority opinion, and extremist groups participating in these rallies constitute an even smaller minority. However, they are a very loud minority that receives disproportionate mainstream media coverage, thus making it important for the general public to understand what they are seeing in these protests and what worldview these symbols and slogans reflect.

Further, it is a reminder of the responsibility the media has in coverage of controversial issues in society. This is because to begin with, it was precisely this disproportionate coverage that made the rallies an irresistible platform for extremists to spread their message and coordinate future activities with other extremists.

Finally, we should remember what these extremists are fundamentally reacting to. It’s not just the government-imposed restrictions, but rather the broad public realization that we’re all in this together and that what is needed is solidarity across sectors. This mindset of collective care and mutual responsibility is anathema to these groups who hold individual rights over all else, and we should therefore be fully cognizant that it is the very fabric of society that they seek to shake, not just government-imposed restrictions.

About the Author
Carole Nuriel is the director of ADL Israel.
Related Topics
Related Posts
Comments