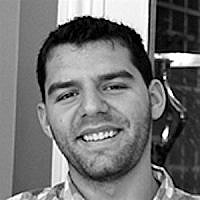 The Blogs
Corey Gary
Apply for a Blog
Please note that the posts on The Blogs are contributed by third parties. The opinions, facts and any media content in them are presented solely by the authors, and neither The Times of Israel nor its partners assume any responsibility for them. Please contact us in case of abuse. In case of abuse,
Report this post.

As most students enjoyed the warm weather that arrived during the first weekend of April, nine undergraduates met for a two-day mock Model Oslo Accords conference at Indiana University-Bloomington.

Negotiations between Israel and the Palestinian Authority have stalled since John Kerry’s failed efforts in 2014. However, in the spirit of the original negotiations two delegations discussed how to reach a two-state solution between the Israeli and Palestinian people.

We were successful after eight hours of intense and emotional negotiation.

Last week a friend of mine sent a Facebook message asking me to participate in this event, sponsored by Indiana University’s Model Arab League & the Model United Nations Coordinating Committees.

I am a pro-Israel supporter aligning my views with Likud and AIPAC. I lived in Tel Aviv for a summer and I’ve been studying Israeli politics since I was in high school. I was surprised my friend invited me to an event associated with the U.N., knowing my firm stance on the conflict that leaves Israel vilified by the international community.

My friend Lydia, is an international studies major who will be perusing her Ph.D. in Refugee Studies in the Fall. We have discussed Israeli politics on a number of occasions, and we agreed that when it comes to Israel I might be one the most conservative minded students at Indiana University. Lydia sympathizes with the Palestinian struggle for self-determination and the millions of refugees that emerged from the Six-Day War. I sympathize with the need for a Jewish and Democratic state in a world where anti-Semitism is becoming more prominent.

Real negations between Israel and will have to begin in a similar manner, with the Palestinian Authority (PA) reaching out to Israel to begin discussions. Israel can prolong the conflict for another 18 years, until there’s a Palestinian majority in Israel and the West Bank. However, in the interim it is in Israel’s best interests to find a permanent two-state solution.

So, how did we obtain an “impossible” two-state solution? Simply put, both sides had to compromise on almost every issue. In this piece, I’ll use the word Palestine to refer to a Palestinian state in the West Bank with new borders. We didn’t even discuss Gaza because we would require eight more hours of negotiations.

The first hurdle was recognizing each other’s presence at the negotiation table. The Palestinians declared their quest for self-determination, their own government and culture. The Israeli delegation wanted a democratic Jewish state, safe from terrorism and enemies in the region. From here the discussions could have gone two ways. First, the two delegations could’ve agreed to a single state solution, but that would have been unrealistic. Representing the Israeli delegation, I pressed for a two-state solution knowing that preserving a democratic Jewish state is paramount to the potential of one not existing at all.

The discussions started with an important theoretical question: what would happen to Israelis inside the West Bank after the creation of a Palestinian state? Both delegations went to an enlarged map of the West Bank with pencils and pens. There are settlements and towns on both sides of the Green line. In the North, there are Palestinian cities in Israel. Near Jerusalem there are Israeli cities in what would become a Palestinian state if decided among 1949 armistice “green” lines. My views with regards to settlements drastically changed after realizing citizens from both countries did themselves a disservice by settling across the green line.

The Palestinian representatives agreed that any Israeli settlement deep inside the West Bank would become part of Palestine in exchange for dual Israeli-Palestinian citizenship. Both parties did their best to allow Israel to annex predominantly Jewish cities such as: Ariel, Beitar Illit, Ma’ale Adumium and Modi’in Illit in exchange for Palestinian cities in the North. We designed a contiguous border between the two nations. 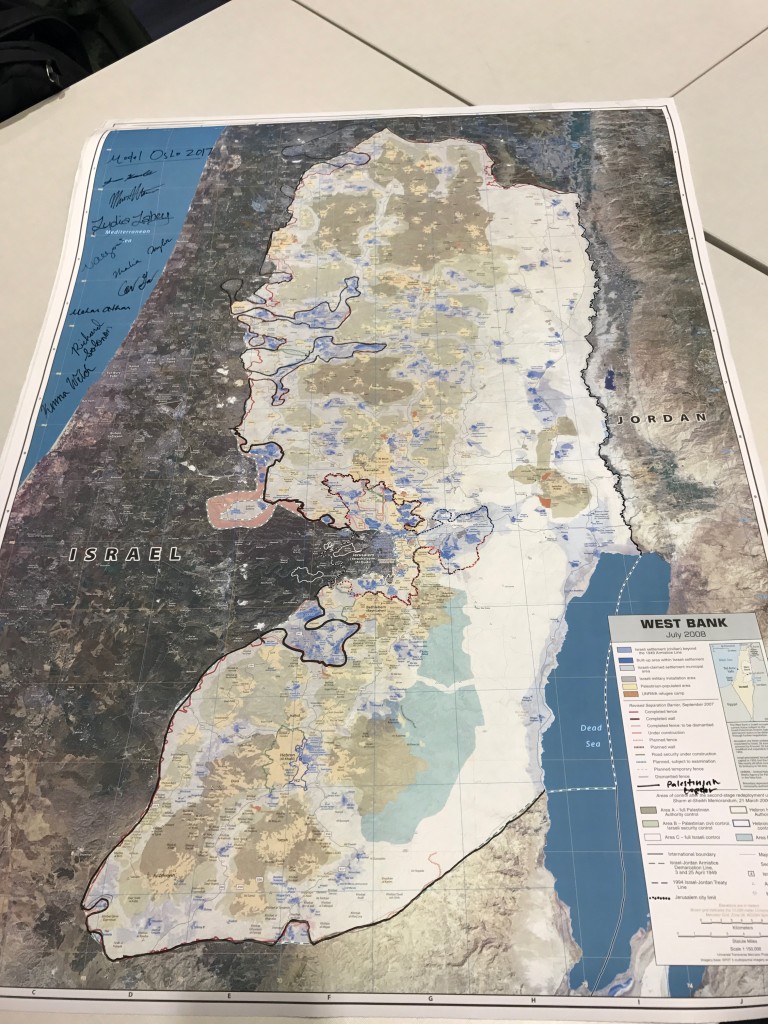 Map of the West Bank with a boarder for Israel and a future Palestinian State.

At the Israeli delegations’ request, an expedited visa system would be created in order to let Israelis freely and safely visit holy places in the West Bank. Historic synagogues, Jewish homes, Rachel and Joseph’s Tombs would be available for any Israeli to visit under the protection of a joint IDF-Palestinian militia in the West Bank. No Israelis would be evicted from their homes in a future Palestinian state, and no Palestinians would be deported from Israel.

A similar visa system would be created allowing Palestinians to travel to Israel for work. Similar in theory to the Schengen Area in the European Union, except with strict border controls and a separation barrier to maintain security. This visa system would be implemented using an online portal that would minimize bureaucracy and increase safety by monitoring the passage of people across the border. The Palestinian delegation pressed for the separation barrier to be removed in 18 years’, and the Israeli delegation agreed.

This two-state agreement is contingent on a new Palestinian state meeting counter-terrorism goals outlined by Israel in conjunction with the international community. The Palestinian Authority must negotiate with Hamas so both parties jointly recognize the State of Israel. Hamas must remove all inflammatory language towards Israel in its charter. The PA would not be allowed to support terrorism either verbally or financially. In this case Israel would negotiate international sanctions if the PA increased its inflammatory rhetoric.

There were many other issues addressed, such as military air-rights and a joint IDF-Palestinian militia in the West Bank. It is known that the IDF routinely trains with the Palestinian militia because the success of both armies is paramount to the safety of the region. What if Israelis and Palestinians shared military bases in the West Bank? There would be mandatory military conscription between both countries and young adults would have to learn to corporate side by side.

There were also discussions of a common Palestinian curriculum recognizing the State of Israel as well as the Holocaust. As academics, we had the most disagreement with regards to developing curriculum as the Palestinian delegation wanted full autonomy over how their youth were educated. I believe this is where the international community would have to step in to make sure Israel and Palestine were accurately portrayed in public education systems. The histories of both countries would have to be acknowledged, as well the British Mandate of Palestine and the Holocaust.

We left Jerusalem for the end of our two-day discussion, as the city is arguably the most complicated part of negotiations. In 1947 Israel agreed to make Jerusalem an international city. My colleague, Richard, described Jerusalem as the middle of a ven-diagram. The city would become the capital of both Israel and Palestine. There would be border crossings on the city limits so Israelis could safely and quickly enter Greater Israel, and Palestinians could enter Palestine. The goal of these border crossings is to make sure that people cannot use Jerusalem as an illegal gateway into each other’s state. With technology such as X-ray scanning for cars, Global Entry and EZ-Pass I believe it’s possible for both countries to implement fast and efficient border checkpoints.

Israelis in Jerusalem would be able to vote in the Knesset, and the Palestinians would be able to vote in PA elections. A citizen would not be allowed a vote in both democracies. Also, Israelis would be afforded all privileges provided by Israel, and likewise for the Palestinians regardless of how they chose to vote. Similar to the West Bank, the border of Jerusalem will be messy but contiguous by annexing Jewish and non-radicalized Arab settlements. There would be free access for Jews and Muslims on the Temple Mount.

Is our final agreement optimistic? Yes, but I believe it is the only real chance at preserving a two-state solution. A solution will be complicated, messy and bureaucratic. Not everyone will be happy, but the goal is to make the region safe and bring an end to the 75-year conflict. The only alternative is a one-state solution where neither delegation is remotely satisfied with the end result.

We were not able to touch upon every issue in the region, such as water rights and trade agreements. However, I believe that both Israelis and Palestinians can come to agreements on these secondary matters. A firm border, the establishment of a Palestinian State and the continued safety of Israelis are the most important parts of this agreement. Without one, the agreement collapses.

Richard, a partner on the Israeli delegation, jokingly told me “Corey, we have to win our elections next year” making light of the reality that any Israeli or Palestinian politician that participates in a two-state negotiation will face immediate backlash. However, I believe politicians who openly and honestly participate in negotiations will be lauded as heroes if a fair agreement is reached.

Corey Gary is a senior at Indiana University-Bloomington majoring in Advertising and Public Relations.

About the Author
Corey Gary graduated from the Berkshire School '13 and Indiana University '17. He immersed himself in Jewish and Israel studies starting in the junior year of high school. During the summer between his sophomore and junior years of college, Corey lived in Tel Aviv for three months after participating in a specialized birthright tour. Corey is living in New York and is looking forward to exploring everything the Tri-State area has to offer.
Related Topics
Related Posts
Comments