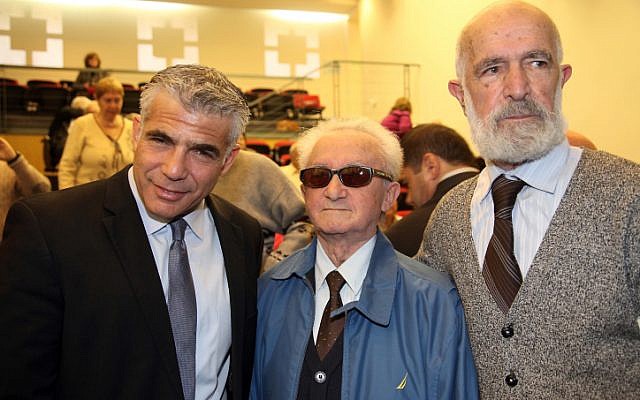 Shtinker and snitch are the new S words. Or at least they should be.

In case you haven’t heard, on Tuesday, Israel Police announced that their investigations had uncovered “sufficient evidence” to indict Prime Minister Benjamin Netanyahu for bribery. When Netanyahu’s coalition chair and frequent enforcer David Amsalem heard that opposition Yesh Atid party chair Yair Lapid had acted as a witness in the investigations, he railed at Lapid, calling him, “a little shtinker” and “a pathetic snitch.”

Let’s talk for one brief moment about the word “shtinker.” And yes, I’m Playing the Holocaust Card again. Amsalem, a son of Moroccan immigrants, used a German word for someone who literally smells. The word was adopted by Yiddish speakers before, during, and after the Holocaust to connote Jews who collaborated with the Germans by revealing hiding places, calling attention to stolen food, etc.

Not coincidentally, Israelis adopted the term to describe Palestinian collaborators with Israeli security services. And local underworld crooks use this term to refer to those who rat out members of their own crime families.

When I discovered that then-president-elect Donald Trump was considering US Ambassador David Friedman for his post, I begged Jews and non-Jews alike to refrain from using the word “kapo,” as David Friedman had done, to depict Jewish supporters of a pro-two-state solution.

I wrote then that “no one — not even the president’s bankruptcy lawyer David Friedman — has the right to judge what others did in those dark days to save children who are now the beloved great-grandparents of legions of offspring. No one has the right to cheapen the memories of beloved parents and unknown grandparents — like my own — who were not kapos, by calling their left-leaning offspring the K word. No one should utter or write a German expletive that forces the hair to stand up on our parents’ tattooed arms, and us to revisit childhoods shaped by their nightmares.”

I asked then that they avoid using the K word as a weapon. And I’m asking now that we avoid using “shtinker” as a weapon for the same reasons. It is particularly offensive when one knowingly uses this word to directly address a child of Holocaust survivors. Believe me, we never asked our parents what they did to survive. To say that calling a 2G a “shtinker” is “triggering” is like saying that there were snowflakes in you-know-where.

But there’s another, more universal reason to expunge the term “snitch” from all our vocabularies as well. At a time when the #MeToo movement has made incredible progress in encouraging women to speak out against abuse and sexual harassment; at a time when Americans are questioning whether beating one’s wives should disqualify one from serving in the White House; and at a time when schools here in Israel and abroad are struggling to remove bullying from the classroom, the playground, and the internet — should we call out those who dare to speak? Should we slam those who testify or name those who perpetrate? Should we preserve corruption, rape culture, and Omerta, or should we protect victims and promote rule of law?

Should we suggest that an MK in Israel, subpoenaed by police to testify under oath in an investigation, should commit perjury rather than be “a little shtinker”?

If a coalition chair tells a party chair, “I was taught when I was a kid, don’t snitch, no one will ever want to sit with you” — as Amsalem did in Israel’s Knesset on Tuesday night — what are we telling a child coping with abusive parents or sexual predators about talking to someone, anyone, about the nightmare that has become his or her life?

Note: I was about to submit this this blogpost, when I discovered that Nikolas Cruz gunned downed at least 17 students at Marjory Stoneman Douglas High School in Parkland, Florida. Police announced that his Facebook page was rife with violent posts and threatening material. His peers often joked that if there was ever a shooting at their school, Cruz would be the perpetrator. But none of them reported this information to the school, their parents, or police. If only one of them had “snitched” on Cruz.

About the Author
Varda Spiegel was Nurse-Director of the Bedouin Mobile Unit of the Negev, later serving as Maternal-Child Health Director for the Ministry of Health Jerusalem District. I was the English Web Content Manager for the Israel Museum and have translated from Hebrew to English for Haaretz and the ANU Museum of the Jewish People. I'm a grandmother, mother, and beachbum.
Related Topics
Related Posts
Comments
Advertisement