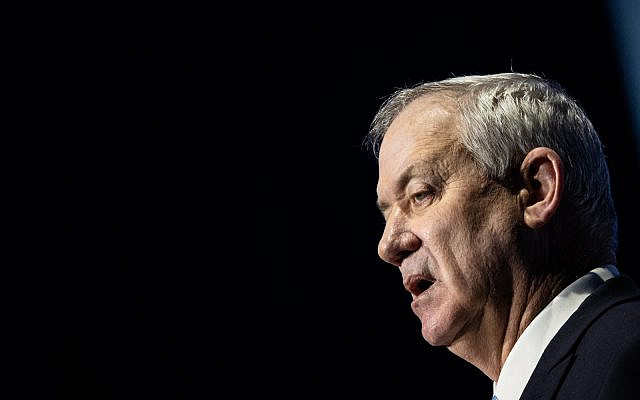 Defense Minister Benny Gantz speaks at a conference at the International Convention Center in Jerusalem, on February 21, 2022. (Yonatan Sindel/Flash90)

As they do every week, yesterday the Blue and White party MKs voted against the opposition’s No Confidence motion expressing its solidarity with the government. And then we walked out, leaving other government-sponsored legislation without a majority. The Knesset plenary was forced to shut down for the day

The immediate response of the press was informed by spins and disinformation. It is well, therefore, to explain what moved a moderate, centrist party to take such drastic action.

The vast majority of Israeli citizens would agree that during the eight-month tenure of this government, the security situation has been as good as it has ever been during the country’s violent history.  All short-term indicators confirm the competence of the army, the defense ministry and their leadership. Yet, when Blue and White chair Benny Gantz took responsibility for our common security as defense minister, he was unwilling to limit his thinking to immediate challenges. Blue and White always claimed to be a party that thought about the good of the country in the long run. And the long run holds existential dangers for our security.

Yes, there is still no shortage of enemies surrounding us. That has always been the case and may not change. But the new danger is internal. And it has to do with human resources. Only 50 percent of 18-year-olds in the country agree to be drafted into the IDF today. The demographic trends indicate that this percentage is going to continue to drop. Who exactly is going to protect the country 20 years from now, unless we act boldly to change present dynamics and create a new paradigm for national service?

That’s why Defense Minister Gantz made it his top legislative priority to adopt a new framework for national service. This revolutionary approach requires that all citizens in all sectors complete national service in their communities. At the same time, it offers a strong financial advantage to those who choose military service. The framework requires the enactment of a number of new laws, including ones that change national service criteria, lower the age of yeshiva “exemptions” and provide greater salary benefits to combat soldiers and reservists.  Once this major reform is achieved, all young Israeli citizens will join in the common effort to make Israel a safe and better country.

For the past eight months, these laws and associated initiatives have been stalled, even though they were all included as part of the coalition agreements – and all were approved by a large majority of the ministerial committee on legislation. Until yesterday, Gantz and the Blue and White party had been the most disciplined and loyal partner in the present coalition. Unfortunately, rather than pursuing the centrist positions that provide a common ground for the coalition to dominate public policies, the prime ministers catered to demands of the peripheral ends of the coalition on the right and the left.

Long before yesterday’s display of determination, Gantz insisted quietly that his security legislation receive a modicum of attention on the Knesset’s agenda. Yet, no one took him seriously, even though Blue and White is the second largest party in the coalition. Like too many Israelis, perhaps they take our long-term security for granted.

What is most infuriating about yesterday’s episode is the cynical response of the press (and a few politicians) who try to frame the entire episode as an attempt by Gantz to provide his cronies with inflated pension benefits. Indeed, one of the laws that has not yet been approved by the Knesset at long last creates a logical basis for military pensions, based on the approach used by the justice system for retirees or the pensions received by retired policemen.

This kind of disinformation needs to be addressed, starting with the claim that given recent inflation, now is not the right time to talk about pensions The truth is that the Supreme Court feels differently. The state attorneys appeared before the court months ago and promised the justices to bring an approved, rational, fair pension system for professional military veterans by February 28, 2022. Gantz, who spent two years fighting Bibi Netanyahu’s attempt to delegitimize the Supreme Court, is not willing to be in contempt.

More importantly, the pension program that Gantz put together and which passed the government by a large margin does not increase the defense budget at the expense of other ministries and their social priorities. It actually reduces the government’s outlays relative to present payments. And it provides, for the first time, preferential benefits for soldiers who spent their military service in combat roles with all the dangers and inconvenience that this kind of service requires. Soldiers in service branches will now serve longer and receive more modest pensions.

There is also a critical moral dimension. While we in the Israeli public were out enjoying good lives in restaurants and concerts, relishing the material benefits of a booming economy, tens of thousands of Israelis gave the best years of their life defending our borders to make it possible. If we do not know how to remunerate these brave and decent women and men, as we promised them we would when they made their many years of sacrifice and gave up a “normal life,” it would constitute an egregious societal bankruptcy. What right-minded, talented young Israeli would volunteer in the future to take over the enormous responsibility and the sacrifices these posts demand, knowing that the government reneges on its commitments? Given the celebrated “human” component behind Israel’s military advantage, this also constitutes an enormous danger to our security.

In short, Blue and White has always put Israel’s needs first. In the present case, we believe that Israel’s long-term security needs must be prioritized. Sometimes, people mistake moderate policies associated with a centrist party as weakness. Yesterday was a wake-up call: Blue and White may be the most polite and respectful political party in this government. But it could not take the country’s future more seriously.