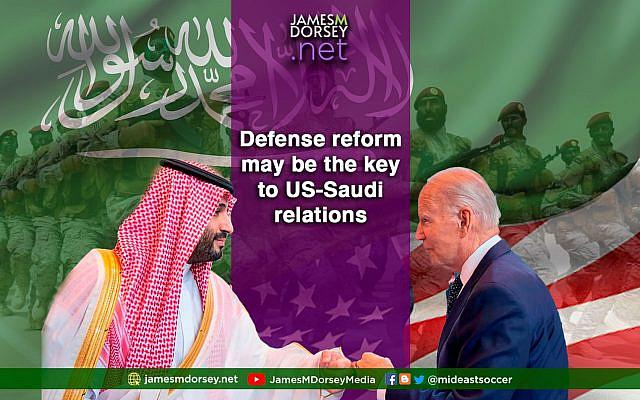 Defense may be the glue /Source: James M. Dorsey

Saudi Arabia’s little touted effort to overhaul its defense and national security architecture may be the United States’ best bet to rebuild relations with the kingdom in ways that imbue values and complicate the establishment of similar defense ties with China or Russia.

“Through the vehicle of defense reform, the Biden administration has an opportunity to engage the Saudis on critical national security matters while safeguarding US strategic interests and honoring American values,” said political-military analyst and former Pentagon official Bilal Y. Saab.

“It’s a wise form of US assistance that isn’t politically controversial, doesn’t cost much US taxpayer money, and doesn’t require a significant US presence on the ground. It is perhaps the only way to reset the currently tense relationship by gradually rebuilding trust between the two sides,” Mr. Saab concluded in a detailed study amid debate about the future of US-Saudi relations and controversy over a visit to the kingdom by President Joe Biden earlier this month.

Mr. Biden’s visit may have helped persuade Saudi Arabia to divert to Europe oil shipments destined for Asia but did little to restore Middle Eastern confidence in the reliability of the United States as a global leader and security guarantor.

If anything the visit served to rehabilitate Saudi Crown Prince Mohammed bin Salman’s reputation, tarnished by the 2018 killing of journalist Jamal Khashoggi with little in return in terms of, for example, human rights in the kingdom.

Drawing a comparison to Crown Prince Mohammed bin Salman’s Vision 2030 economic reform and diversification plan, Mr. Saab argued that the development of implementation mechanisms that are refined as plans move forward would determine the success of the defense and other change programmes.

“What Riyadh lacks in Vision 2030 is not strategies or ideas—it has plenty of those—but processes that help get them from point A to point B. It’s the same problem with the defense transformation plan,” Mr. Saab argued.

“The trick for well-intentioned American advisers involved in the Saudi defense transformation plan is to get the Saudis to stop treating it as an end in itself and get them to work on essential processes they desperately need to defend the kingdom today and adequately plan for the future,” he added.

The overhaul of the defense and national security architecture, the most radical military reform since the creation of Saudi Arabia in 1932, aims to enable the kingdom to defend itself, absorb and utilize US weapons systems, and make meaningful military and defense contributions to regional security,” Mr. Saab said. If successful, the reforms would offer “invaluable lessons for US military assistance across the region.”

So far, “the kingdom has been the model of dysfunctional US-Arab military cooperation, representing everything that has gone wrong in US-Arab defense ties,” Mr. Saab, who at the Pentagon had oversight responsibilities for US Central Command that operates in the Middle East, noted.

“For far too long, Washington has sold the Saudis and other Arab partners expensive weapons they either didn’t need or know how to use and sustain properly, never bothering to assist them in developing their armed forces so they could ably assume their own national-security duties,” Mr. Saab asserted.

Over the years, Saudi expenditure on the acquisition of arms, among the highest in the world, juxtaposed with the kingdom’s inability to perform on the battlefield and defend itself, made it the butt of jokes and ridicule.

The Saudi failure was one driver of past widespread empathy with jihadists who, with 9/11 and until the defeat of the Islamic State in Syria and Iraq, appeared able to achieve more with less.

To be sure, Gulf states have progressed since the days when they were unable to field a military response to Iraqi leader Saddam Hussein’s 1990 invasion of Kuwait and needed the international community to come to their rescue.

Saudi Arabia has since fielded and sustained a military force in Yemen for the past seven years but has been unable to reverse the territorial and strategic advances of the Houthi rebels or prevent one of the world’s worst humanitarian crises.

Mr. Bin Salman, who has gained complete control of all of Saudi Arabia’s defense and security forces since coming to office, has been driven in his national security reforms by the lessons of the war in Yemen, Houthi and/or Iranian attacks on oil and other critical infrastructure in the kingdom as well as the United Arab Emirates, and the US failure to respond robustly to those incidents.

“Instead of breaking or downgrading defense ties with the Americans, the Saudis wisely chose to more effectively partner with them and seek their advice on how to create a better-functioning defense establishment. Washington answered the call,” Mr. Saab said.

But Mr. Saab cautioned that while “this change in the US attitude toward defense relations with Saudi Arabia and Saudi self-defense is monumental, necessary, and overdue,” it was only one part of the equation. “The Saudis still have to execute, and given the broad scope of their defense reforms, the journey will be long and arduous,” he said.

The state of Saudi defense was abysmal before the launch of the reforms in 2017.

“Saudi Arabia had no ability to formulate a coherent national-defense strategy nor any effective operational and tactical guidance for its armed forces. Vision existed only in the minds of one or two Western-educated royals close to the king, and there were no clear procedures to ably communicate strategic and policy direction to the military,” Mr. Saab said.

The Saudis lacked systematic defense analysis and strategic planning to prioritize missions and capabilities and identify requirements, which would have helped them avoid buying expensive equipment they did not need.

Analysis and planning world have also enabled them to monitor, assess, evaluate, or improve the readiness levels of their troops. Similarly, Saudi ground and air forces could not communicate with one another, which made coordination all but impossible.

Saudi air and missile defense may be where the kingdom has progressed the most. It has intercepted hundreds of Houthi missile and drone attacks, even if some have defeated Saudi defenses.

“Many of Saudi Arabia’s defense problems…still exist. What’s encouraging, though, is that the Saudis, under MBS’s (Mohammed bin Salman’s) leadership, now recognize these deficiencies and seem, for the first time, determined to address them in partnership with the United States and to a degree with the United Kingdom.,” Mr. Saab said.

Atmospherics and public posturing may be one thing, the nitty gritty of US-Saudi cooperation another. In the ultimate analysis, cutting through the noise to focus on what is happening in the real world may be the best measure of the future of US-Saudi relations. And that may be a more optimistic picture than meets the eye.

A podcast version is available on Soundcloud, Itunes, Spotify, Spreaker, and  Podbean.

About the Author
Dr. James M. Dorsey is an award-winning journalist and scholar and a Senior Fellow at the National University of Singapore’s Middle East Institute. He is the author of The Turbulent World of Middle East Soccer.
Related Topics
Related Posts