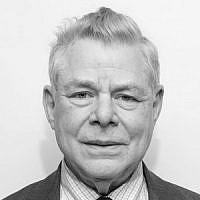 The Blogs
Max Singer
Apply for a Blog
Advertisement
Please note that the posts on The Blogs are contributed by third parties. The opinions, facts and any media content in them are presented solely by the authors, and neither The Times of Israel nor its partners assume any responsibility for them. Please contact us in case of abuse. In case of abuse,
Report this post.

Winston Churchill was right when he said in 1947 that “democracy is the worst form of government ever invented – except for all those other forms that have been tried.”  One of the reasons is that sometimes a democracy will fail unless its citizens act maturely despite inclinations tempting them in another direction.  “Democracy,” here means all the processes and behavior that determine what happens in the governance of a liberal democratic country such as Israel.

Israel’s democracy is now undergoing such a test.  Our region is in a time of bloody turmoil and instability.  Israel, despite its great strength, faces dangers that require it to act prudently, wisely, and perhaps forcefully to protect itself from rapidly changing security developments.

Fortunately we have a Prime Minister who is widely recognized to be, and is, one of the most eloquent and capable statesmen in the world today.  Although no one would claim that he makes no mistakes or that Israel’s policy could not be improved.

Partly because of Netanyahu’s unique experience at the center of affairs for many years, and the opportunities he has had to build relationships with leaders such as Putin, Trump, Modi, and Abe (of Japan), it is clear that no other Israeli today is anywhere near as capable of running Israel’s foreign and security policy as Bibi is.

On the other hand a great many Israelis scorn the Prime Minister and disapprove of him.  Even many of his admirers see him as a man of poor character – small-minded, selfish, miserly, and disloyal, unable to create and maintain close relationships with strong people and political allies (with the striking exception of Ron Dermer).  Perhaps most of all, Bibi’s hedonistic life style – apart from his strong work ethic — offends many Israelis who contrast his style of life with that of Begin, Rabin, and other Israeli political leaders from the past.

Of course if it turns out that Bibi is guilty of real criminal conduct – as distinguished from technical violations of law – Israel would have to do without his foreign policy talent and experience.  Perhaps there is still a possibility that the extraordinary efforts to bring Bibi down, by his long-time enemies in the media and the police, will succeed in proving that he is a criminal who Israelis cannot in good conscience leave as head of government.  But so far what is apparent is that a small amount of fire can be used to make a large amount of smoke, and that much of Israel’s establishment uses double standards to pursue partisan goals at the cost of weakening their Prime Minister’s ability to do his job.

Israel’s democracy – voters, politicians, media, and police – must decide whether Israel’s Prime Minister shall continue to be the man by far most capable of protecting the country in particularly dangerous times, or will be replaced by someone whose personal character is felt to be less objectionable – especially by leftists troubled by having to face a man of the right who is obviously smart and sophisticated.  Although experience suggests that if Bibi is replaced as PM we cannot assume that his successor will necessarily be a person of better character.

On present evidence, if Netanyahu has to step down now it will be a failure of democracy.  It would be a profligate decision to prefer desire for a more simpatico national leader over a determination to put the country’s safety in the best hands available.

One possibility is that the police, media, and elite attacks on Bibi will force him to have an early election which returns him to office, perhaps with an increased majority.  That would be a case of democracy succeeding through the wisdom of the voters defeating media and legal system leadership.  Although despite their defeat by the citizenry that elite group would have inflicted great costs on the country by an unnecessary election and the diversion of much of Netanyahu’s time and energy from his job.

Of course Bibi will not live forever, and no person is indispensable.  Sooner or later Israel will have to find a new prime minister.  If necessary Israel will get through the present and future dangers without Netanyahu.  But a maturely prudent democracy will take advantage of Bibi’s special talents and experience as long as it can even if it dislikes him.

About the Author
Max Singer is a senior fellow at the Begin-Sadat Center for Strategic Studies and a founder and Senior Fellow of the Hudson Institute. He is the author, most recently, of "History of the Future," Lexington, 2012
Related Topics
Related Posts
Max Singer
Comments