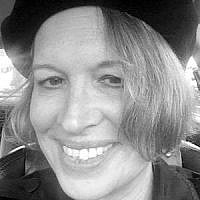 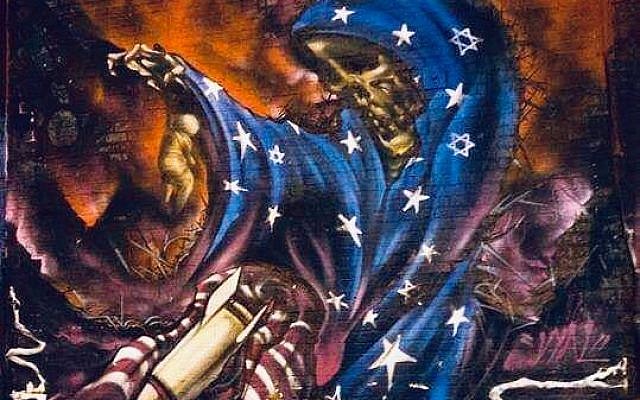 “A mural featuring anti-Semitic imagery at the Vortex in downtown Los Angeles.”

Left-wing anti-Semitism is not a phrase invented to stifle people’s criticism of Israel. It is real, and it is growing.

We see on the far-right what Trump has helped embolden, preying on fears of the “other” with dog whistles, hate mongering, and anti-Semitic tweets.

In the California Democratic Party, we have a few very vocal party delegates, caucus heads, and other leaders, with a fixation on anti-Jewish and Zionist conspiracy theories rivaling the language of the white supremacists in Charlottesville, the Protocols of the Elders of Zion, Henry Ford, and even David Duke himself.

Naturally, there are those activists who are unfamiliar with what anti-Semitism is and how it is expressed, who are willing to listen, learn, and be educated by their Jewish friends and associates. To be clear, these do not fall into that category.

Let’s play a game. Here are four examples. One of these references is from a well-known and publicly acknowledged anti-Semite.  The other is from a California Democratic Party delegate’s Facebook posts. See if you can guess which is which:

That Jews are doing to Palestinians what the Nazis did to them is one of the ugliest expressions of anti-Semitism, yet it is too often utilized by the far left in their campaign against Israel. The first quote is from David Duke former Grand Wizard of the KKK. The second is from a Democratic Party candidate for Assembly District Representative who lost, fortunately, but she received close to 46% of the vote.

The first, of course, is the familiar chant of white supremacists with tiki torches at the Unite the Right rally in Charlottesville, Virginia. The second is from a delegate and self-described Christian on the CADEM delegates Facebook page. In each of these conspiracies, whether it is the Jews in America or Zionist Jews in Tel-Aviv, they must be stopped from taking over and bringing evil.

The similarities are striking, portraying Zionism as a power-hungry and thoroughly evil ideology. The top quote was made on Facebook by a California Democratic Party delegate who also holds a top position at CAIR, the Council on American-Islamic Relations. The second is an encore appearance by white supremacist, David Duke.

In each of these, Judaism or Zionism is portrayed as an evil, supremacist, monolithic, and unquestionably loyal force. The first is from an article posted in the California Democratic Party (CADEM) delegates Facebook page by the head of an official caucus of the state party. The second is by none other than the notorious antisemite, Henry Ford.

Progressive, anti-racist activists on the left in the Democratic Party are quick to point out that it is the anti-Semitism on the right that is the real threat. And, indeed, it is a serious threat. However, it is clear that there are striking similarities on the far right and left, especially when it comes to dangerous conspiracy theories of evil, all-controlling, and powerful Jews.

We need to be able to deescalate the false and conspiratorial hate language that is regularly used by a few very loud and insistent voices working within the Democratic Party. If we cannot, then I see us on the same trajectory as the ugly circus that has become the UK Labour Party.

Alternatively, if the Democratic Party leadership at all levels is able to recognize the growing anti-Semitism within its ranks for the looming crisis it is; and begins to shift the culture so it becomes just as wrong to malign the Jewish people—whether speaking of Israelis or Zionists—as the African-Americans, Latinos, LGBTQ, and any other oppressed minority, then we may have a chance.

The enemies, as always, are silence and inaction.