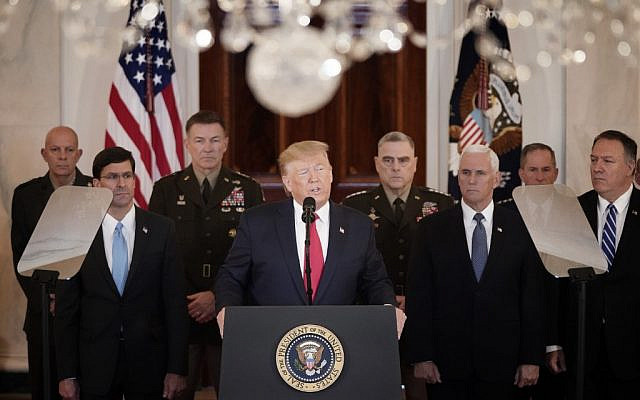 One of the Trump presidency’s sickening features, and there have been plenty of them, has been the American president’s servile acquiescence to aggression against our country by a hostile adversary.

Russia’s deliberate, highly organized attack on America was in the form of a sophisticated operation aimed at throwing a presidential election to Trump in order to bring about the installation of a president for some reason favorably disposed to it, and to avoid a president ready, willing and able to oppose it.

Democrats have spent no small amount of time since 2016 shaking their heads in understandable disbelief that Republicans, so eager for so long to claim the mantle of national security as one uniquely their own, have not only looked the other way at an enemy’s assault on our homeland but cooperated with it, even blocking with every means at their disposal investigations aimed at informing the American people about the purpose and extent of Russia’s attack.

But the un-nuanced reaction of some on the Democratic left to the targeted killing of mass murderer Qassem Soleimani, commander of Iran’s Islamic Revolutionary Guard’s Quds Force, exposes them to a similar criticism: that they are pooh-poohing the murders of innumerable Americans for which Soleimani bore responsibility, seeming to demand that we look the other way at years of brutal killings of American women and men serving our country.

It isn’t the numerous valid criticisms of and questions about Donald Trump’s order that Soleimani be executed that is troubling. This president has given the country no reason to trust a single thing that he says or does. It is rather the reflexiveness and lack of balance on the part of some on the Democratic left which raises this question: Do these Democrats believe that the United States can ever act to deter the killing of Americans by a hostile power, or to retaliate against them for doing so? If they do, then when and under what circumstances? If they do not, then can — and will — they be entrusted with the protection of the nation?

To be sure, nothing about what Trump and his men have shared about Soleimani’s killing suggests that it was preceded by thought, let alone deliberation. The consequence of 15,000 or so demonstrable falsehoods by the president of the United States over three years is that he has not one bit of credibility.

As for Secretary of State Mike Pompeo’s lament that our European allies are disinclined to be “helpful” to the administration on Iran, it is shocking that this could surprise him. Those allies have been subjected to non-stop insults by our president, head-spinning about-faces, Putin-coddling and Amateur Hour-worthy machismo by American officials internationally perceived as liars and clowns. What, one wonders, could Pompeo have expected?

And there is not a blessed reason to believe that Trump and team have given much thought, if any, to the inevitable Iranian response. If they have, they have not bothered to share it with congressional leaders, let alone the American people.

“The president,” tweeted former Governor Deval Patrick tartly on Saturday, “owes our service men and women and their families an explanation of his strategy toward Iran before he plays his next round of golf.”

Still, and as Democratic presidential candidates like Joe Biden, Pete Buttigieg, Amy Klobuchar and Patrick grasp, the eventual Democratic nominee will be asked: Should an American president be limited to expressing dismay about a sworn enemy’s multi-year killing spree of Americans, or hoping that it does not continue, or decrying it when it does?

It won’t suffice to simply deplore “endless wars” or label others “neo-cons.” When the Trump era ends, it will remain our duty here on planet Earth to sometimes prevent evil people from doing evil things. The American people will likely not elect a Democratic president who seems unprepared or unwilling to do so.