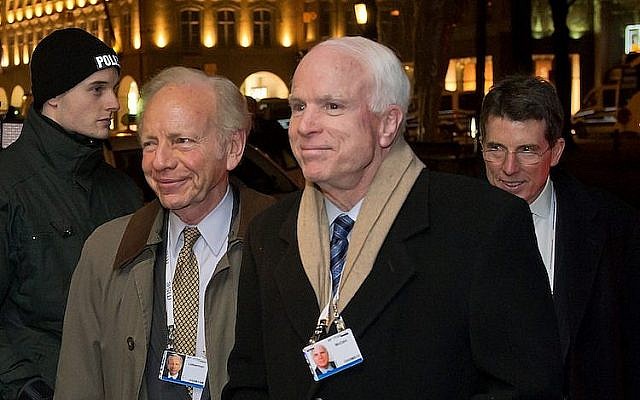 Israel’s relationships with Trump, the Conservatives, the Right, and the Evangelists have never been better, but cultivating a relationship with the Republican Party may turn out to be a mistake. Our narrative is far bigger, and there is no reason that the Democrats, and especially the younger members, should not be part of this narrative.

This is not only a question of self-interest (the next president may be a Democrat) but also one of the truth. Millions of young Jewish Democrats can and must consider Judaism and Israel to be the source of their inspiration and identity. On Friday nights, in the liturgical poem Lecha Dodi, we welcome in the Shabbat singing: “You will break through on the right and left.” Perhaps because the Shabbat is truly much more of a breakthrough than the arguments between the Right and Left.

The Orthodox Union (OU) in the United States also believes this to be true and so they published Joe Lieberman’s latest book. A few weeks ago, I was in New York for the book launch. Lieberman is considered to be the first religiously observant Jewish senator in the history of the United States and he represented Connecticut. He was the Democratic Party’s nominee for vice president, running with Al Gore.  The fact that it is possible to be a senior Democrat, a Jewish candidate for the vice president of the United States and a religiously observant Jew is important.

In his speech at the book launch, Lieberman said:  “My friend John McCain has an entire comedy sketch describing how difficult it is to observe the Shabbat with me. We once spent Shabbat together at the David Citadel hotel and he got stuck in a Shabbat elevator which stopped on every floor. He has spent many a Shabbat meal with me in my hotel room, and was always very respectful. As a rule, throughout my career I found that non-Jews respect my way of life. I have this message for young Jews: Don’t feel that your decision to be faithful to your heritage will harm your career in the big wide world. Before I started a new job, a childhood friend advised me not to wear a yarmulke in my new workplace, saying that it would create a stereotype. The next day I met my friend and asked him if he was certain about this, since my new boss himself wore a yarmulke…  When I ran for office in Connecticut, I did not attend rallies held on Shabbat. I sent a video message which was played during the election rally. People respected this.”

Lieberman’s new book is about the Torah, the Revelation and about the Festival of Shavuot. He notes that this festival is celebrated by the least number of Jews and it follows Pesach, the festival celebrated by the greatest number of Jews. “I believe that this is because the Exodus carries a universal, popular message which was a driving force for all of humanity, including the Founding Fathers of the United States. However, the national and religious story of Shavuot demands more of us, and it is more difficult. The Jewish nation was not formed for the sole purpose of becoming free and equal in the Exodus. The nation was also formed for the purpose of receiving the Torah, on Shavuot. If we just commemorate the Exodus from Egypt, we will remain in the wilderness. There is even more. We tend to think that only the Exodus influenced the United States, yet the Revelation at Mount Sinai formed the basis of all our civilization here. The Ten Commandments are the start of human legislation. I say this as a lawyer, a legislator and as someone who tries to be law-abiding.”

Lieberman continued to speak about anti-Semitism, Israel, Zionism, and the Clintons. There was one topic he did not elaborate on — President Donald Trump. His name was hardly mentioned. Lieberman concluded with two sentences that touched the hearts of his audience: “May God continue to bless America. May America continue to strengthen Israel.” And as an afterthought: “And my daughter is making aliyah this summer.”