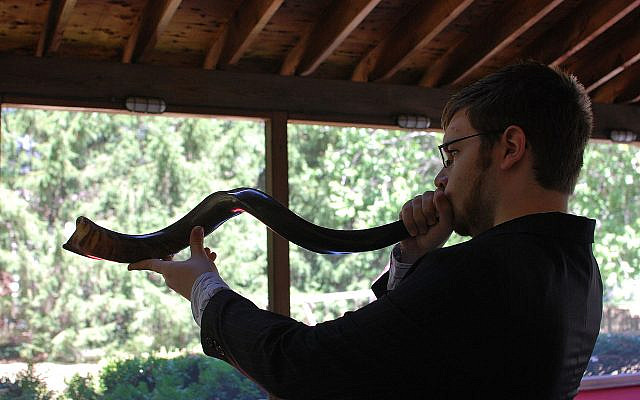 Blowing the Shofar at the end of Yom Kippur, September 9, 2010. (Wikimedia Commons)

As we approach Yom Kippur, we are mindful of the process of soul-searching that becomes possible if we take at least some of the major prayers of Yom Kippur seriously. The Al Het prayer, which is part of our communal confessional—the centerpiece of all the prayers on Yom Kippur– will be uppermost in our minds this year, in the midst of the coronavirus pandemic, whether we say this prayer on zoom or at an outdoor synagogue with relatively few people.

In Israel and in the United States, we the people have been the victims of denial, deceit, cynicism and irresponsible behavior by our “leaders” during the last nine months, since the beginning of the pandemic. This has led to massive confusion on the part of the public, and has dramatically increased disgust and distrust in government, with a staggering number of people getting sick and dying from the virus, and millions of people in quarantine.

In the USA, the president is in deep denial of this, masquerading around at rallies without a mask, and with thousands of followers doing the same. In Israel, the Prime Minister is continually playing politics, to keep his coalition government in power, while trading restrictions on hafganot (large public demonstrations, especially outside his residence in Jerusalem) for restrictions on tefillot (massive uncontrolled deathly prayer gatherings in the ultra-orthodox communities in Israel). According to medical experts, both large gatherings should be prohibited immediately—to save lives!!—but our governmental leaders are cynically risking lives by playing internal survivalist politics.

During the past few months in Israel, our health and economic crises have gone from bad to worse to disastrous. The number of people getting sick and dying has been skyrocketing. And the hospitals are becoming overcrowded, causing the doctors to tell us now that they can barely manage the situation.  We are currently facing a major disaster in Israel.

And what was our Prime Minister doing all this time?

In August, he wasted an entire month fighting with his main coalition partners through constant deceit and games—what he called “shticks and tricks” — — exactly what he promised not to do when he formed the emergency national coalition in May! And then he wasted the first half of September in diplomatic games with his friend in the White House, and some kings in small states in the Gulf region, while the house in Israel was burning. He came back to Israel two days before Rosh Hashanah and only on the night before this holiday, in the evening, last Thursday night, did he finally get involved and issue instructions for a weak “fake” lockdown, which large numbers of people in Israel are not taking seriously.

It was one of his most incredible moments of unbridled chutzpah and irresponsible leadership in recent Israeli history. No wonder that only 30% of the citizens of Israel trust his handling of the pandemic right now! No wonder that so many people are now ignoring his “guidelines”, not to mention other political leaders –like Avigdor Lieberman or Yair Lapid—who issue irresponsible calls for anarchic disobedience of the law in these critical times.

And what was the President of the USA doing? Flouting his own CDC guidelines by not wearing a mask at massive rallies, blaming everyone else for the virus, not paying attention to science, claiming irresponsibly that the virus would go away or that he had it under control. He won’t be going to synagogue on Yom Kippur next week, but nevertheless he should undergo some serious soul-searching. He has behaved so irresponsibly and unethically during this pandemic so that most Americans no longer trust him, just as the Prime Minister in Israel is no longer trusted.

All of these immoral actions—and lack of actions—have led to massive anxiety and despair among the citizens of Israel and America. This has led to chaos and confusion. There is a growing feeling that these “leaders” haven’t the faintest idea of how to get us out of this mess, not the disastrous health crisis that we face, nor the economic one. In addition, it has led to a massive moral malaise. We the people are witness to political behavior that has become so systematically cynical, devoid of ethics and empathy, that we are in a constant state of shock and dismay.

Interestingly, I found some hope and inspiration today from the non-political realm. I heard two of my favorite modern orthodox rabbis in Israel–Rabbi David Stav of Shoham and Rabbi Yehuda Gilead of Yeshivat Ma’aleh Gilboa–speak on the radio and television today. They both stressed the importance of preserving life by praying only outdoors and only in small numbers on this Yom Kippur. Representing the Tzohar  rabbinical organization–which organizes hundreds of religious services for Yom Kippur all over Israel– they offered  the moral voices that we need to hear more often in the media in Israel.

We in the Jewish community are in the midst of our “Days of Awe”, our ten days of repentance between Rosh Hashanah and Yom Kippur. This is a difficult time—a serious time—any year, but much more so this year.  On Yom Kippur next week, we will not be praying in large beautiful synagogues, with all the pomp and ceremony that goes along with these “High Holidays”. Instead, we will be praying at home through zoom, or on plastic chairs in small minyanim outside, where it is safer.

On Yom Kippur this year, we can use this time for some serious soul-searching. Among the many issues that we will think about is leadership. How did we get the terrible irresponsible and unethical leaders that we have now? What did we do wrong to get to this point? And can we change? Can we elect leaders who are more moral and meritorious, people who can express empathy and caring for all the citizens of their country, and take the appropriate actions for the health and welfare of all of God’s children?

When we hear the sound of the shofar at the end of Yom Kippur this year, may it resoundingly wake us up to face the enormous challenges of the year ahead with confidence and resolve to make this a better world.