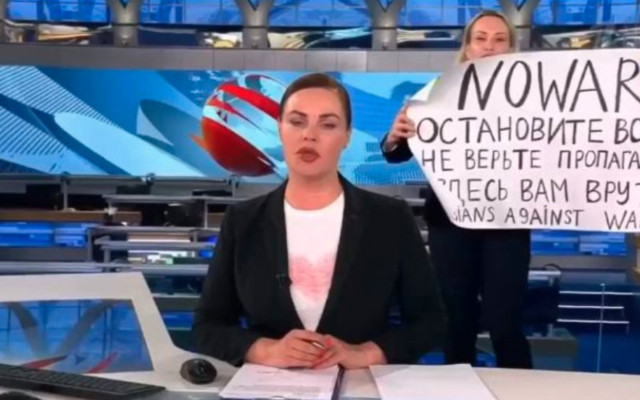 This has been a terrible week for the people of Ukraine. Every day we see new images, and hear new testimonies, that make the horror less fit to put in words. How can I go about my day when pregnant women die, when bodies rot on balconies, when children cry for parents who are no longer there to hold them tight?

And yet, within this time of horror, two anniversaries gave me strength.

The first anniversary is personal, familial:

45 years ago this week, on March 15th 1977, my father, Natan Sharansky, was arrested in the USSR. He was grabbed by a group of KGB agents in the middle of a Moscow street, shoved into a car, driven to and through the two gates of Lefortovo prison (“they never opened at the same time,” he told me when I was a child. “Like the gates to the lions area in the safari.”), stripped, searched, and formally accused of espionage and treason -trumped up charges that for all their clear falsity, could still result in his death.

“We do not let heroes leave Lefortovo alive,” one of his interrogators told my father a few months later, after trying – and failing – to get him to recant and repudiate his fight for human rights.

But on this week, 45 years later, I look at my parents’ happy home in Jerusalem, and I know: this man was wrong.

The entire system behind him was wrong.

They had a great many advantages – power and prisons and guards and an army – and they thought that these tools gave them full and eternal control over people’s lives. But they didn’t; not once enough of these people were willing to risk everything by standing up to the regime — and not once enough people in the west committed themselves to keeping the spotlight on those brave individuals within the USSR and applying pressure on the USSR in their defense.

My father left Lefortovo – and the USSR – alive.

It happened then, and it can happen now.

As I watched Marina Ovsyannikova risk her liberty this and well being by bursting into one of Putin’s propaganda channels this past week with a “no war” sign, as I watched thousands of men and women in Russia rally to protest, I felt awe – and I prayed for their safety. But more than that, I felt hope. My family history taught me this lesson: if these brave Russians persevere, and if we lend them our attention, freedom can and will prevail.

The second anniversary is national: millennia ago, this was the week that saw Haman’s plans for genocide die their final death. There is much that Purim can gift us today — a reminder that we must use whatever power we have to help others, for maybe it is for this time we have gained it; a reminder of what we can do when we come together; a reminder that evil plans can and must be overturned. But this year, what struck me the most was not the megillah’s many lessons. What struck me, instead, was the joy.

Our joy on Purim has a taste of defiance to it; yes — Esther is still chained to a mercurial, callous king who can order genocide on a whim, yes — Mordechai’s power is entirely dependent on the same mercurial king’s favor, yes — we still live in a world where one man’s ambition can sow terrible violence, turn 2 million people into refugees, butcher and destroy. But nevertheless, and despite it all, we will find a cause for joy.

And tyrants know it.

There’s a good reason why jokes repeatedly irk them. There’s a good reason why laughter scares the guardians of the status quo. When we look at the world and laugh at it we do more than make ourselves feel lighter. We also recognize the world’s absurdities and gaps, the many ways in which the way things are should not be taken all that seriously. In fact, our very feeling of lightness is a testament to the burden we shed — the burden of exaggerated reverence in the face of what is.

When a man laughs at the tyrant, when a woman smiles to his face, the tyrant sees his power over them – the power of intimidation, of forcing a certain experience of the world upon them – slipping through his fingers. By choosing joy, we assert our inner freedom — we say, “you can’t make me respect the word you’re shaping. And you can’t make me sad.”

Today, as we read the megillah, as we danced and sang and dressed in silly costumes, Ukraine was never far from my mind. I didn’t feel as though my joy clashed with my concern and concentration on what’s happening there; I felt, rather, that I was throwing my own happiness in Putin’s face.

We will stand up to you with humanitarian aid and sanctions and everything we can push our government into doing. We will pay attention to the dissidents within your country. We will help them wrest freedom from your hold.

But we will also refuse to give you purchase within us. We will not let you force us into misery. We will not accept the world on your grim terms.

We – I – will not let you take away our capacity for joy.