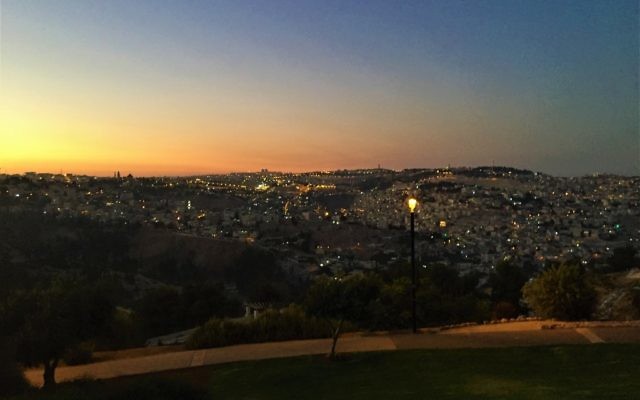 There’s nothing like a walk on Jerusalem’s Tayelet — the Haas-Sherover Promenade — to feed your soul and restore your equilibrium. I’ve been visiting this magnificent promenade at least once a week, ever since I took a silent vow after four soldiers were murdered there seven months ago on the 10th of Tevet, the day that commemorates the start of the siege on ancient Jerusalem.

Yesterday after work, I sought refuge from my Facebook newsfeed, where people were either decrying the removal of metal detectors from the Temple Mount or bemoaning the fact that they had been put there in the first place. I needed some respite from the photos of the kitchen where three members of the Salomon family were brutally murdered on Shabbat. And I yearned to escape the feeling that my city is about to ignite.

So my husband and I set out for the Tayelet.

The walk on the promenade was therapeutic. With each step, the pale white cobblestone beneath my feet banished the images of the crimson and scarlet floor tiles that had haunted me for days. As dusk fell and the sky turned a deep lavender, the still air gave way to a gentle breeze.

Like my forefathers, I stood atop the ridge and looked at the place from afar — the mountain that is nestled between the surrounding hilltops. The place where a father stood at the command of his God, ready to sacrifice his beloved son. The place where two brothers carrying heavy bags of wheat met, wept, and embraced. The place where the two Jewish Temples once stood and where the breathtaking Dome now stands. The place that symbolizes both endless love and eternal conflict.

The ancient walls of the Old City stretched out before me, awash in ochre and sienna. One by one the house lights and street lamps came on, twinkling in golds and orange, as minarets and turrets lit up in fluorescent green. A swath of purple light stretched beneath the Dung Gate toward the ancient City of David. Presiding over the scene was the Dome of the Rock, perched atop the Temple Mount, its glistening dome rising above the treetops, giving no hint of the violence that took place in its courtyard last week. And off to the side, hidden in the waning light, a gray separation barrier was winding its way between the buildings on the hillside. I couldn’t see it, but I knew it was there. 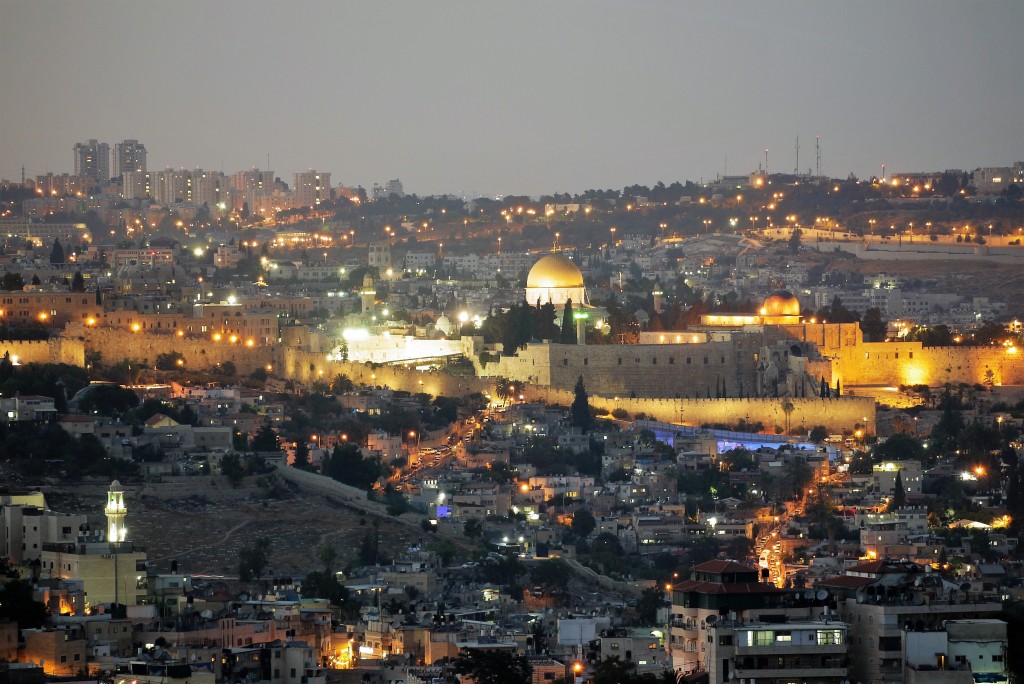 As we walked, the air swelled with the sound of the muezzin. Layer upon layer of calls to prayer cascaded on each other — deep, sonorous chants in a language I don’t understand. “Where are the prayers taking place?” I wondered. “The metal detectors have been removed. Is the Temple Mount still being boycotted? Will the riots continue tonight as well? And what will tomorrow bring?”

Then, as fast as they rose, the plaintive tones stopped, and we became aware of the everyday sights and sounds around us.

An older couple sat side by side, carving out an intimate space between them. He was slight of build, and all in gray, from his steely hair through his T-shirt and pants. She had orange hair and was wearing a floral dress with splashes of magenta and pinks. “What kind of life have they had together?” I found myself thinking. “Has he been her anchor while she has engaged in flights of fancy? Will the two of us look like them one day?”

Two women in black robes and hijabs jogged by together. Water bottles in hand, they ran the whole length of the promenade, and then at the end turned back, chatting and panting all the way. “How often do they come here?” I wondered. “How many children do they have at home? And who is watching them now?”

On the lush green grass, between the olive and pomegranate trees, a tall blond woman was playing with three little kids, as their double stroller looked on. Their blond locks flowing as they ran, the children were staggered in steps, aged perhaps 4, 3, and 2. I envied their youth, their innocence, and their abandon. But most of all, I envied their fearlessness.

For as much as I tried not to, every time young Arab men passed us, I stiffened and held my breath. “Are they carrying knives? Are calls of Allahu akbar about to fill the air? Are we about to become tomorrow’s news?” But the young men were simply going about their normal lives, just like everyone else who had come to the promenade.

As it got darker, the Western Wall was ablaze in white light. We could make out the wooden bridge ascending to the Temple Mount, which replaced the earthen ramp that collapsed in the snow. Many of my friends traversed that bridge this week, going up to the Temple Mount during the Muslim boycott, in the hopes of visiting their holiest site without being harassed. Maybe someday, when the conflict has been resolved and people of all faiths can pray there, I will go too.

As night fell, and we felt less and less comfortable, it was time to leave. As we crossed the street, we took one last look at the scene across the valley. The stone-encased bollards, which were set up to protect visitors from vehicular terror after the murder of the soldiers, were bathed in gold light. They echoed the battlements atop the Old City walls, replicating the rectangular indentations in miniature. We realized that while we were standing on the magical walkway looking out on the glorious view, we had been standing between the defensive barriers of Jerusalem, old and new. We had been between the straits.

Walking in silence, we headed for home, escorted by a shining sliver of moon that reminded us that it’s the start of Av, when the mourning for the destruction of the Temple intensifies. And all the way, we were accompanied by the dread of catching up on the news, and by the fervent prayer that the time will come when the barriers will be broken, and the ordinary people of this City of Peace, and all the peoples of this land, will be able to live together in harmony. 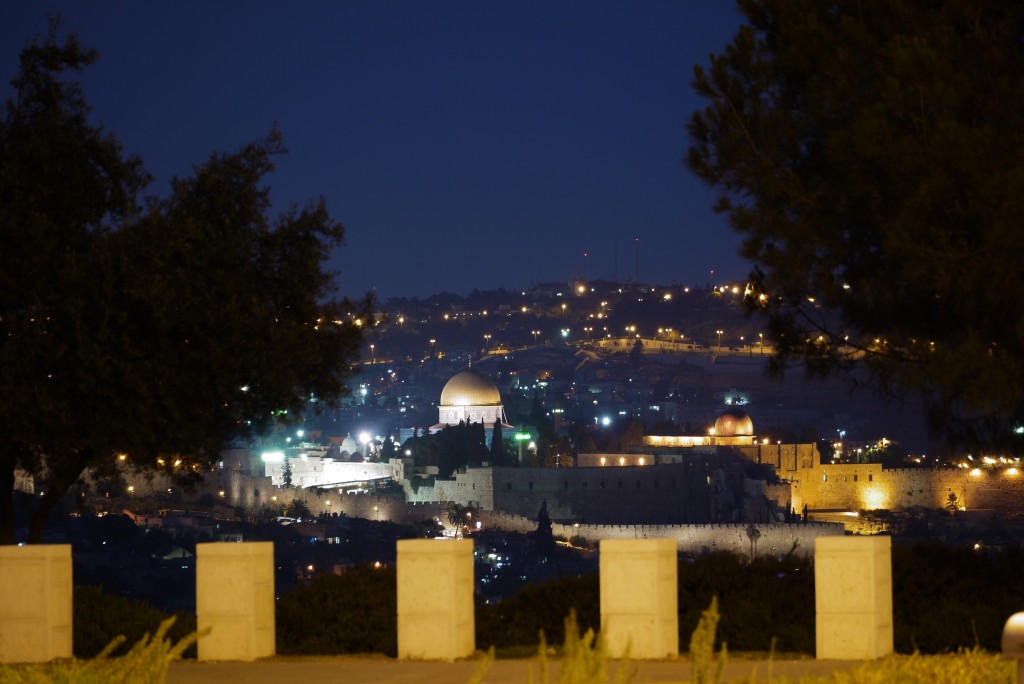 (Eliezer Be’eri)
About the Author
Shira Pasternak Be'eri is a Jerusalem-based editor and translator. She is married to Leonard (aka Eliezer) and is the proud mom of three boys, two of whom are soldiers in the IDF. Born and raised in New York, she has been living in Israel since 1982. And yes, she is Velvel Pasternak's daughter.
Related Topics
Related Posts
Comments