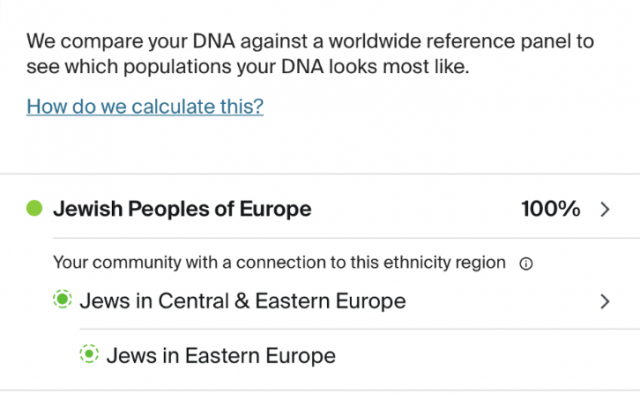 I decided to take a DNA test when I heard other Jews took it and they got 90-something percent Jewish.

While I already know what I am, I know that my whole family is Jewish, I always get weird guesses from other people on where I’m from. I get Russian quite often. I thought to myself, maybe there’s a possibility that I have a great-grandmother or great-grandfather that wasn’t Jewish.

But according to my family, everyone is Jewish.

When I asked a friend, they told me it would be impossible to come out as one hundred percent. Especially for me, I mean, I remember even going to a shul once and the man at the door investigated me, asking me if I’m Jewish.  Anyway, when I told my friend I’m going to take a DNA test, they responded, “For sure, it’s going to be in the high 90s.”

Well, I got my results. It turned out that I’m a hundred percent Jewish, which was no surprise, I guess, even if I did not look like a “typical Jew.” It doesn’t mean anything. It turns out I’m the most Jewish person alive. At least genetically. I guess we shouldn’t judge a book by it’s cover.