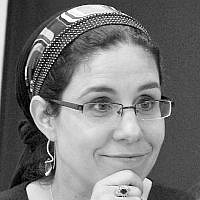 The Blogs
Atira Ote
Apply for a Blog
Please note that the posts on The Blogs are contributed by third parties. The opinions, facts and any media content in them are presented solely by the authors, and neither The Times of Israel nor its partners assume any responsibility for them. Please contact us in case of abuse. In case of abuse,
Report this post.

I deliberated before I sat to compile my thoughts on Megillat Esther. What fresh angle, new insight, and creative idea could I bring to this powerful story that hadn’t already been written? Some emphasize the setting of the story, concentrating on the meaning of the exile for the Jewish people. Others focus on the importance of the hidden, yet definitively palpable, divine hand throughout the megilla. Still, others highlight the feminist perspective, finding significance in the fact that the hero in this special story of salvation is in fact a woman. And these are all worthy discussions.

Still, I would like to offer a less popular interpretation. What inspired me most while learning the megilla this year were the raw human emotions that were at play in this story. There are seemingly ordinary, yet instrumental, scenes that are meant to awaken us. However, they often go overlooked and are likely underappreciated because they appear so mundane. If we examine the sequence of events closely, each one of us can find ourselves in this narrative. These messages are still relevant today and they have far-reaching implications. Were we to internalize the lessons, the results would be transformative, both individually and collectively.

To me, this is a story of pride, corruption, and deceit, and how one person was uniquely positioned to challenge the system. It is a testament to the genocide that so easily could have transpired because powerful people assigned deceptive egomaniacs to be their trusted advisors. It is proof that when no one takes the time to ask critical questions, horrifying atrocities can occur. It is a poignant description of a newly appointed queen who, with the help of her cousin, bravely chooses to sacrifice her life for the benefit of her people. It is history that repeats itself — a hero who accepts her role, realizes her potential, confronts evil, and allows the truth to emerge. It is a candid account of the struggle against misconduct in an archaic structure engineered by bullies. It is a timeless tale about finding one’s voice in the dark, standing up for what is right, and daring to create a solution.

If we delve into the text, we meet Haman. Clearly driven by hubris, insecurity, and fear, Haman is infuriated that Mordechai defies the edict of the throne and refuses to kneel before him. He somehow convinces King Achashverosh that the Jewish people, the nation from which Mordechai originates, are a threat. Their sin is the fact that they are different. For that, the king must not tolerate them. Rather than delving deeper and investigating, Achashverosh takes Haman at his word. Just like that, he allows him to devise a plan to annihilate this distinctive Jewish nation.

We first witness Haman’s ruthlessness and hunger for power when he (Memuchan) advises the king to strip Vashti of her title. He stifles her bold refusal to be paraded about in front of the king’s men for the sheer purpose of ogling her beauty. Haman fears that if Achashverosh does not punish Vashti publicly, more wives will learn from her insolent behavior and rebel against their husbands.

Later, we see just how haughty and narcissistic Haman really is. Haman incorrectly assumes that Achashverosh wishes to reward him for some benevolent act that he must have performed for the king. It never dawned on him that it would be anyone else. Surely he deserved to be favored above all. Once again, he feels utterly degraded when he is commanded to escort Mordechai, the very person who defied his order, as he rides through the town on the king’s horse dressed in royal garb. He becomes so enraged by jealousy, that he and his family plot to hang Mordechai.

Haman is in essence a man filled with envy. He expresses hate for the people who have the confidence to be themselves. He is resentful of those who do not require his assistance to succeed. And it is precisely his pompous, spiteful character that eventually leads to his downfall. Hashem enables Mordechai and Esther to defeat Haman’s threat of destruction. Hashem helps those who help themselves. Esther and Mordechai become paradigms of faith, determination, and courage.

In response to learning of Haman’s plans, Mordechai screams aloud, laments, and dons clothes of mourning. Then, in a moving speech and a pivotal scene, Mordechai encourages the understandably nervous Esther not to be silent. He explains to her that perhaps she was made queen specifically for this reason. In other words, everything is predetermined by Hashem, but it is our job to make the right decisions. At that moment, Esther tells Mordechai to gather the people together in fast and prayer. She cautiously and heroically prepares to approach the king without being summoned, an act punishable by death. With the help of Mordechai, Esther conquers her fears and takes the necessary action to enable justice to prevail.

Upon hearing the new information that Esther brings to light, Achashverosh is irate. Even before verbally verifying the accusations that Esther reveals, even before Haman admits his wrongdoing, the king rises from his chair in anger. Aside from the rage he feels towards Haman, he is clearly upset at himself. How could he have missed this? Isn’t it the job of the king to make sure he does not surround himself with liars? Doesn’t a head of state have an obligation to ensure that his officers are the most loyal and trustworthy of people? How many innocent lives had to suffer at the hand of Haman’s wickedness?

Achashverosh immediately repents and overturns his ruling, allowing for the continuity of the Jewish people and the very public death of Haman and his family. But were it not for Esther and Mordechai, Achashverosh would have remained blind. The king must have suspected. But he, too, kept quiet. Perhaps he never cared enough to probe. Maybe he was afraid to uncover truths that lay right beneath the surface. After all, how much did the king really want to know? Detecting negative traits in other people also makes us realize uncomfortable truths about ourselves. So, how much did Achashverosh actually want to see?

Most of us do not wish to see the bad in other people. After all, we are taught to always give others the benefit of the doubt. But we also have an obligation to denounce corruption. On the verse, “…hoche’ach tochiach et amitecha…”(Vayikra 19:17) (you must reprove your fellow Jew), Rabbi Jonathan Sacks, zt”l, points out that aside from the obvious relevance this mitzva has to a victim, the deeper meaning suggests that even as observers we are commanded to get involved. Moreover, he explains the concept of “critical followship.” Leaders are understandably held to a higher standard. We expect that they will act honorably and prevent impiety. But even laymen must commit themselves to ethical conduct. Even disciples must protest when they see transgression.

Edmund Burke, an Irish philosopher and member of parliament once said, “The only thing necessary for the triumph of evil is for the good men to do nothing.” Megillat Esther reminds us just what can happen when people stay silent. If we simply wait for others to take the first step, no one may step up. Unwittingly, we become part of the problem.

We learn here about the pursuit of justice even during uncertain times. We see the importance of the hope that leads to deliverance in periods of despair. We must look to Hashem, follow the truth, keep the faith, and be prepared to sacrifice everything to save those around us. Hashem gives us the chances we need. He places us in unique positions at precisely the right moment. It is our job to keep our eyes open at all times, face our fears when necessary, overcome our apprehension, and seize the opportunities. Even when all seems hopeless and we feel that we are alone, we must remember that Hashem is always with us.

Esther and Mordechai teach us that we have the power to change the world for good. Whether we are the queen or the common Jew sitting at the palace gate, it is our responsibility to strive for honesty, advocate morality, and clearly condemn misconduct. Our task is to follow the righteous path, constantly act with integrity, and have the courage to embrace the mission that Hashem gave us.

We must work to undo wrongdoing and confront bullies wherever they are. The Torah explicitly commands us not to ignore our fellow Jews when they need our help, as it is written in Vaykira 19:16 “… do not stand idly by while another’s blood is shed…” We have a duty to go out of our way to save a person’s life. The burden is on us to diminish their suffering. But how many of us recognize that opportunity?

There are Hamans in our midst today. As unpleasant as it may be, can we identify them? And even when we do, are we as brave and heroic as Mordechai and Esther? Are we doing our part to seek the truth, pursue justice, and promote virtue, even in the face of adversity? Can we honestly say to ourselves that we are part of the solution and not part of the problem?

About the Author
Atira Ote is a passionate rabbi's wife, mother of five, artist and translator currently living in Jerusalem. She has translated a few volumes of Peninei Halachah by Rav Eliezer Melamed and has put out a CD of original Jewish songs, called "Vayhi Or", with her husband. Take a look at her artwork: https://www.facebook.com/pages/Art-by-Atira/837415652951429 or listen to their music: http://www.cdbaby.com/cd/yosselaoteandatiraote
Related Topics
Related Posts
Comments