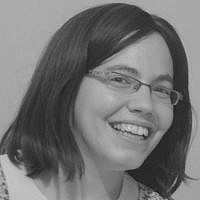 The Blogs
Chana Roberts
Apply for a Blog
Please note that the posts on The Blogs are contributed by third parties. The opinions, facts and any media content in them are presented solely by the authors, and neither The Times of Israel nor its partners assume any responsibility for them. Please contact us in case of abuse. In case of abuse,
Report this post.

An Iran strike is difficult not just because of the distance (or the neighbors), but because of what we need to destroy. Some of the nuclear reactors and research centers are close to the surface, or above ground. But most of them – and most of the crucial parts – are deep underground.

To destroy underground nuclear centers, we’d need to use a lot of bunker busters. And even then, there’s a good chance we wouldn’t manage to destroy Iran’s nuclear centers completely.

Now, if Israel had an aircraft carrier, this task would be infinitely easier. We’d park our aircraft carrier in the middle of the Arabian Sea, and zing, zing zing! Everything but the Arak reactor is in easy reach.

The only problem? We *don’t* have an aircraft carrier. Bummer for Israel, huh?

So we can either use regular bunker buster bombs, or we can find a different solution. Israel, the Land of Advanced Technology, certainly has options other than carpet bombing Iran’s nukes, right? Yes.

To answer the question in the title: Yes, we have the bunker busters necessary. No, they aren’t the best option. And yes, we do have better options. In fact, we have several of them. Each option comes with its own risks and benefits. But each will do a decent job of effectively destroying Iran’s nuclear reactors and nuclear research centers.

For example, one option is to seal up the entrances. This is slightly tricky – we don’t know *exactly* where those entrances are – but it buys us time. Those inside the nuclear center would suffocate, and those outside would go berserk, trying reopen the entrance or create a new one.

In the meantime, Israel would be free to “take care of” Iran’s air force, enabling easier future strikes and making the area safer for our soldiers. Then, at our convenience, we could completely destroy not only the nuclear reactors, but also anything else we want.

Do I think this is a likely scenario? No, I don’t, and that’s why I’m willing to put it on the internet. However, it is certainly plausible, and works well as a plan B or C.

Now the major question is: What is Israel waiting for? Honestly, it’s not clear. There are a few options, the worst of which is laziness. On the other hand, perhaps that isn’t a question that should be discussed on the internet.

Next up: It’s not that hard to hit uranium, after all.

About the Author
Chana Roberts is a creative, thinking writer, educator and person. Chana recently realized that those around her consider her to be empathetic and knowledgeable, with a good dose of [un]common sense. An American expat and Israeli-by-choice, she currently lives with her husband and kids in the beautiful land of Israel.
Related Topics
Related Posts
Comments