The Lithuanian government constantly tweets using the hashtag #HistoryMatters. It appears that currently, the biggest concern to the government of Lithuania, is historical revisionism by Russia. Russian disinformation is a concern indeed, but Russia is no more guilty than Lithuania itself. They are, in fact, two peas in a pod. Following is an example of the level of deception by Lithuania on even the most innocuous appearing of their factoids.

Current government marketing, as reflected in the first line of the post below (“what is #lithuanian.”), defines Jews as Lithuanians in order to market Lithuania as a Jewish tourist destination, and to draw in Jewish investment. But, what is the reality? 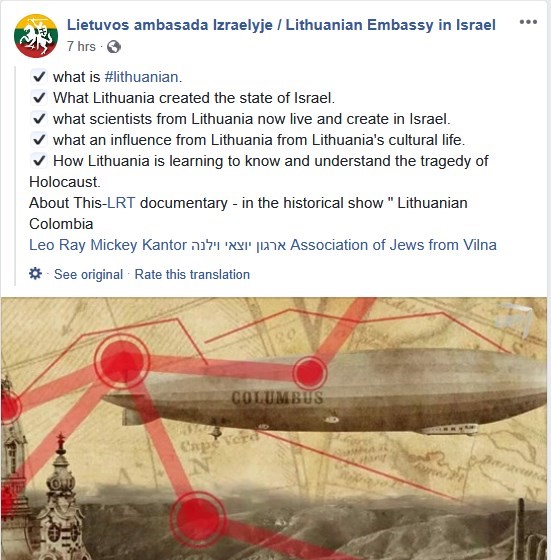 Lithuania promotes itself as a land of tolerance. That idea is derived from one leader in the year 1323 that invited Jews to create an environment more conducive to science and business. Immigrant Jews were then considered Lithuanian.

The father of the modern 20th century Lithuanian nation was Dr. Jonas Basanavicius. In his demand for independence, addressed to the Russian Prime Minister in 1905[1], Basanavicius declared that the Kaunas, Grodno, Vilnius, and Suvalki provinces and parts of the Kurland province were historically Lithuanian and that the Poles, Jews, Russians, and other groups living in those areas were, in essence, invaders, who had come “recently.” He wanted an ethnically pure state. The idea of plurality was an anathema before Lithuania ever regained independence. To nationalists, the idea of a “nation” is an exclusionary, “ethno-linguistic” state. Anyone who is not an ethnic Lithuanian is a “foreigner”.

The following is a December 1906[2] declaration:

We demanded autonomy for Lithuania with the Seimas in Vilnius , disregarding the fact that the residents of the city and its environs are partly foreigners [Poles, Jews, Russian, and others] and partly denationalized Lithuanians [Belarussians] …”

These were the foundational Lithuanian visions. Diversity and liberalism in the new Lithuania were momentary and fleeting, and only for convenience.

During the first independence (1918-1940), government registers reflected Christian Lithuanians that spoke Lithuanian as their home language as “Lithuanians”, while Jewish Lithuanians were listed as “Jews” or “Jewesses”. It was clearly understood that a Lithuanian was not a Jew, and no Jew could ever be a Lithuanian.

Interwar leaders proclaimed their desire for ethnic cleansing of Jews. There was no reason for them to hide the foundational goal of the state. They created the slogan “Lithuania for Lithuanians” (Lietuva Lietuvams) which is still in use in today. It means the ethnic cleansing of minorities from the state. And so it came to pass that these leaders took control of the state and eradicated Jews through mass murder. The Holocaust in Lithuania had largely been completed before Germany instituted theirs.

Interim Lithuanian Prime Minister Brazaitis-Ambrazevičius wrote a letter to his friend, Z. Ivinskis on May 23, 1971, in which he addressed the Holocaust in Lithuania:

The first Bolshevik period altered the relationships. But again, not for racial or religious reasons. Rather because in those Bolshevik days the Jews, or more precisely, the younger Jewish generation, appeared in the vanguard of a foreign culture -Communism, the dominance of a foreign occupation. That was “wilted”/post-Jews run amok [a word play where “bloom”=”Jew”], which incurred responsibility upon all Jews -just as those Jews who crucified Christ for many ages incurred responsibility upon all Jews, especially when that other portion of Jews did not distance itself from those post-Jews[3].

According to his standard, all Jews for all eternity are guilty for a crucified Christ, especially any Jew that did not distance themselves from Judaism – i.e. convert to Christianity. Accordingly, to Brazaitis, all Jews are collectively guilty of any act committed by another Jew, but positive acts belong exclusively to that singular person (who would then be referred to as a Lithuanian for this singular positive). Brazaitis’s standard is a typically antisemitic standard, he was after all, an annihilationist antisemite.

Prime Minister Brazaitis-Ambrazevičius was first to order a concentration camp in Lithuania to be built for Jews. He merely asked his citizens not to murder Jews “so publicly”. Evidence of Brazaitis’s crimes was discovered by the Lithuanian government in 2001 in the decrees of his Provisional Government.

The Government later falsified the meaning of USA Congressional documents to declare his innocence, and even went so far as to claim that the USA Government had apologized for suspecting him. Upon discovering this falsification, USA Congress demanded from the current Prime Minister of Lithuania to stop using American Congressional documents for their Holocaust deceptions. They have yet to retract their falsifications.

In order to combat just a fraction of these Lithuanian government lies, I have challenged the government in my individual capacity. Here are my claims and lawsuits filed against the government in just the past few years (excluding prior citizenship cases).

It is apparent to all that the government and Courts of Lithuania have unified cohesively to deny the culpability of Lithuanians in the Holocaust. Their references to “and some Lithuanians collaborated” while honoring the worst of them is Holocaust revisionism. This is simply Holocaust denial running rampant through almost all levels of government.

For many decades, Lithuania made it clear that they wished for a Judenrein state. They created that Judenrein state through genocide, and now they celebrate the murderers as their national heroes while denying their heroes committed crimes.

Jews, who have been on the wrong end of the concept of “generational guilt” for 2,000 years, reject such an absurdity. Each person is responsible only for themselves, and a nation is responsible for the acts of its government. The Lithuanian government is CURRENTLY guilty of massive Holocaust revisionism. Hopefully, in time, the youth will redeem their state.

In his “Notes on Nationalism,” George Orwell observed that nationalists have a remarkable capacity to ignore atrocities committed by those who share their values. It is apparent that the values of Noreika, Skirpa, Brazaitis and so many more remain shared Lithuanian values in large swathes of that society, and especially in the government and their halls of Justice.

Lithuanian Ambassador to Israel, Lina Anatanaviciene is the official salesperson for her nation, she is in Israel to sell her country to Israelis. She must therefore provide talking points that make her product attractive to a prospective customer. In the absence of genuine talking points, she has no option but to use a 697 year old factoid and try to make it appear current. This explains the first point in her Facebook post at the beginning of this article. That even a point as simple as calling Jewish Lithuanians “Lithuanians”, has to be examined for the truth, what of larger items?

It is incumbent upon any customer to look under the hood at the merchandise on offer, and when one does, there is only Holocaust revisionism, moral corruption, and a society whose values are largely unevolved since 1941. The product is defective.

I do believe Ambassador Anatanaviciene is sincere in her goodwill, as is her boss, Foreign Minister Linkevicius. They are, however, minority voices subservient to nationalist forces within their country. I am sure the good people of Lithuania outnumber those who have dominated until now, and hope it will not take the state another 697 years to come to their senses and to find a modicum of integrity. The good people of Lithuania have yet to make their voices heard; may they soon awaken from their slumber. Yes, history does matter, and until Lithuania is willing to begin addressing truth, them pointing fingers elsewhere is hypocrisy.