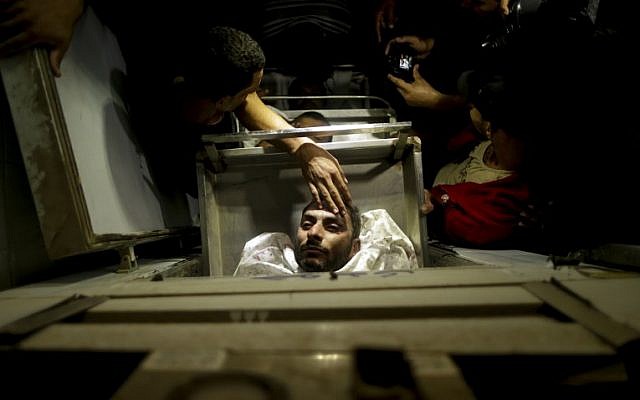 The bodies of Palestinians killed after Israel blew up a tunnel stretching from the Gaza Strip into its territory, lie at a morgue at al-Aqsa hospital in Deir el-Balah, in central Gaza, on October 30, 2017. (AFP PHOTO/MAHMUD HAMS)

Israel is holding the bodies of five Palestinians, who were killed in an underground tunnel that they were building in order to infiltrate our villages and kibbutzim for the purpose of murdering and taking hostage innocent, unarmed men, women and children living close to the Gaza Strip. Most of us would not shed a single tear for their deaths.

They were not shahidim, or martyrs, as those who sent them would portray them, but rather depraved human beings, who believed it legitimate to attack defenseless people in pursuit of their objectives.

That having been said, Israel’s refusal to return their bodies to their families in an attempt to use them as pawns to bring about the release of Avraham Mengistu and a further unnamed Bedouin-Israeli citizen and force the Hamas to return the bodies of Hadar Goldin and Oron Shaul is contrary to the kind of values that we would expect of a Jewish state.

It was Hillel the Elder who said: “Do not do to your fellow human being what is hateful to you” (Shabbat 31:1). (I know that some would argue that “fellow human beings” means Jews, but I don’t share that view.)

President Rivlin himself pleaded for the return of the Israelis as being an act of “basic humanity.” How can it be any different when the bodies of Palestinians are concerned?

As a bereaved father, whose son Yonatan z”l was killed by the Hezbollah, my heart goes out the families of those whose loved ones, whether alive or dead, are being held by the Hamas. However, we as Jews are meant to be rachmanim b’nei rachmanim, the merciful children of merciful parents.

Our enemies are merciless and brutal, but that does not justify our behaving like them. The Cambridge Dictionary describes a barbarian as someone who is “less socially advanced and more violent than your own.” The Hamas are barbarians. We cannot allow ourselves, however painful and excruciating it may be, to behave like them.

About the Author
Rabbi Boyden was educated and received his rabbinical ordination in London, England. Having served as the rabbi of Cheshire Reform Congregation for thirteen years, he made aliyah with his family in 1985. He has established Reform congregations in Ra'anana and Hod Hasharon and previously served as director of the Israel Reform Movement's Beit Din.
Related Topics
Related Posts
Comments
Advertisement