At the heart of most of the defenses you’ll read of the “reforms” to the judiciary that Justice Minister Yariv Levin is planning, are a number of strawman arguments. You’ll hear claims made – sometimes well-argued, sometimes not – about “judicial overreach,” “judicial activism,” how “undemocratic” or “anti-democracy” the Supreme Court is, etc. The problem with these arguments is not that they are wrong (though I believe they usually are*), but that they are beside the point.

(*I’ve read arguments for and against the activism of the Court. Personally, I am not convinced that it is too activist, not least because it has struck down only 22 pieces of legislation since 1995, less than 5 percent of the approximately 470 petitions requesting such judicial action. Many other judiciaries in other countries intervene far more often. Nevertheless, enough people I respect and admire (both from the left and the right) disagree with me that I do not dismiss that view entirely.

The idea that the Supreme Court is ‘undemocratic’ is based on a complete distortion of the democratic idea – at least, liberal democracy as it’s practised in the West. Democracy is not just majority rule, but the protection of fundamental rights and the prevention of abuse of the minority by the majority. (In Hungary, Viktor Orban has established illiberal democracy, which explicitly endorses the view that majority rule is all that matters.)

As Menachem Begin wrote, back in the days when the Israeli right was deeply committed to liberal democracy: “We have learned that an elected parliamentary majority can be an instrument in the hands of a group of rulers and act as camouflage for their tyranny. Therefore, the nation must, if it chooses freedom, determine its rights also with regard to [the Knesset] in order that the majority there, that serves the regime more than it oversees it, should not negate these rights. It is possible to achieve this only through ‘the supremacy of law,’  which is to say fixing the civil freedoms as ‘the fundamental law’ or ‘supreme law’ and permitting the panel of judges to cancel the validity of law if, in opposition to the fundamental law, it contradicts civil freedoms.”

The real issue is not that the government is planning to reform the judiciary, but how it is planning to do so. Even if these critiques were right – that the Supreme Court is too activist, and that its actions are anti-democratic – the answer to the problem cannot be to create an all-powerful, unrestrained, government. And that will be the result of Yariv Levin’s proposals. The sum total of the override clause, giving the government exclusive power to select judges, and replacing apolitical legal advisors with yes-men, is the effective removal of checks and balances.

And of course, what most of the people criticizing Supreme Court activism fail to mention is that in Israel, there is nothing except the Supreme Court to act as a check and balance on the executive and legislative branches. The Israel Democracy Institute’s Suzie Navot has described Israel as uniquely vulnerable to “the dangers of populism and democratic erosion”.  Dan Meridor put it most succinctly in a recent interview when he said:

We have no amending second chamber, our substitute for a constitution is a set of Basic Laws that can be amended by a simple majority, there is almost no devolved government to speak of. Neither does Israel possess Britain’s set of uncodified conventions and norms which have been very successful (with the very recent exception of Boris Johnson’s government) at dissuading prime ministers from abusing their power.

So, if it is the case that the Supreme Court is too “activist”, one could argue that it has had to be in the absence of anything else. A serious attempt at reform would therefore not simply deal with the Supreme Court, but would look to address many other aspects of the extremely ad hoc and unsatisfactory Israeli system.

That is quite plainly not what Yariv Levin is trying to do. Levin – like Smotrich, Ben Gvir and others in the government – has a record of statements opposing liberal democracy. We are now in a situation after all where MKs from the Likud – not simply from Otzma Yehudit – are advocating that Jewish murderers be treated more leniently than Arab murderers. This is Israel’s first government where a significant number of its most powerful members are genuinely not interested in Israel remaining a true democracy. An Orban-style concentration of power in the hands of the majority is the aim.

And sure, they’ll tell you it’s about fixing the Court’s activism, and “rebalancing” Israeli democracy. But if a politician in Europe with a record of antisemitic remarks started pushing for a ban on kosher slaughter, would you believe him when he says it’s just about animal welfare? The true motivations of these people are clear if you bother to read what they have said in the past – and some still say – about democracy, the rights of minorities, and other basic liberal values.

One final thing. I am not saying here that I believe everyone who voted Likud – or even everyone who supports Levin’s proposals – shares his intentions. People vote the way they do for myriad reasons. (Hillary Clinton’s “basket of deplorables” comment wasn’t just politically stupid, it was also just stupid.) But I do think that if people took the time to explore the political trajectory of today’s Likud, and Levin’s place as one of the core ideologues pushing the part away from its liberal roots; if people were more aware of what has happened in countries like Hungary and Poland (and how close the Likud has become to the authoritarian populist parties there), they might find the party and its ideas less appealing.

About the Author
Before moving to Israel from the UK, Paul worked at the Embassy of Israel to the UK in the Public Affairs department, and as the Ambassador's speechwriter. He has a Masters degree in Middle East Politics from the University of London. He is currently a Senior Fellow at the Menachem Begin Heritage Center in Jerusalem - though he writes this blog in a personal capacity. He has lectured to a variety of groups on Israeli history and politics and his articles have been published in a variety of media outlets in Israel, the UK, the US and Canada.
Related Topics
Related Posts
Paul Gross 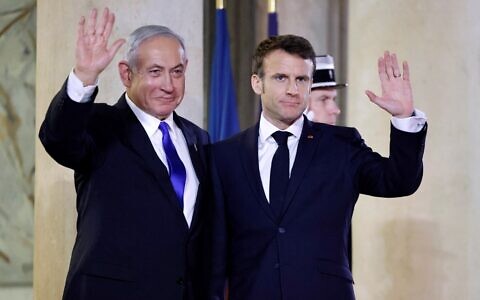