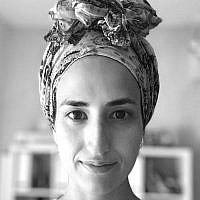 The Blogs
Nava Goldberg
Apply for a Blog
Please note that the posts on The Blogs are contributed by third parties. The opinions, facts and any media content in them are presented solely by the authors, and neither The Times of Israel nor its partners assume any responsibility for them. Please contact us in case of abuse. In case of abuse,
Report this post.

Why make Aliyah? It’s damn hard. I mean, if you don’t have to, then why put yourself through the ordeal of being an immigrant? It’s the “holy land.” It’s “our home.” It’s “just such a special place.” True. But, are you ready to feel really uncomfortably out of your element and experience repeated bouts of isolation and possible depression? A third of the suicides in Israel are committed by immigrants. When you are an immigrant, you are in a more vulnerable position than you were as a native. You are not fluent, you are not familiar with, you are not well-connected. Likely, you are clueless about most things that you would have easy mastery over in your country of origin. Communication is choppy. Cultural norms are puzzling. Your support network is no longer on the same continent so it must be rebuilt from the ground up. Creating a situation for yourself in this new land that rivals what you had in the native one, even with all of its holiness and specialness, is truly a colossal effort.

Of course, I am addressing immigrants who come from countries which are neither hostile to Jews nor economically inferior to Israel. Who in particular do I have in mind? Those pampered “Anglo” Jews like myself who do not need to run away from anything and who move to Israel voluntarily, for idealistic, religious or romantic reasons. They criss-cross aerial paths with Israelis departing from Ben Gurion in search of a higher quality of life. And many a time, these Anglo immigrants find themselves cornered by exasperated Israelis in cabs or pubs asking why in God’s name did they voluntarily leave a country that has less wars and more wealth?

You’d better come up with a good answer. Because, eventually- maybe it’ll be the loneliness or that out-of-context sensation, the frustration with language or cultural barriers, or that economic scarcity that you never quite experienced before- you’re going to be wondering the same thing. Why did I come here again? Was it worth everything that I left behind? All of the privileges associated with being a native to a country: cultural and linguistic mastery, the network of family and friends that gradually evolved over a span of decades, an identity that is more or less insured. And, yes, also a country that has less wars and more money, you left that behind, too. And you need to know why.

I’ve made Aliyah three times in my three decades of life. And, every time, I face the enormous challenge of trying to make this homeland my home, and I don’t always succeed at it. I have met many other Anglo immigrants who don’t succeed at it, either. Idealism doesn’t always win over basic psychological needs, and being an immigrant is psychologically trying.

Paradoxically, a common trial for the Anglo immigrant is not feeling a sense of belonging. But isn’t this why they moved to Israel in the first place? They felt this magical existential harmony that first week on their zionist/religious organized trip? Where did that go? Even before those packaged experiences, I remember my early love affair with Israel, when I would visit relatives and feel so uplifted by the fact that I was in an all-Jewish country. I could be as Jewey as I wanted to be without having to explain myself to any puzzled expressions. Then, it was so clear to me that I belonged under the scorching Middle East sun, forget North America! When I actually lived in Israel- whether it was that year in the kibbutz, or when I volunteered for the IDF, or most recently as a nice Jewish girl in seminary- I have repeatedly experienced the challenge of sustaining that sense of belonging that I originally felt and translating it from theory to action. The theory is indeed strong, but its manifestation in reality is truly hard. You must overcome the disadvantages of being an immigrant, a stranger, even in the land of your own people. Certainly a proof that the Messiah has yet to come: the Jews have Israel, but many of us are still wandering inside of it.

I still sometimes consider the option of moving back, and this lack of airtight resolve might be the cause of my woes. It takes a lot to rebuild a life from the ground up, and you are probably more likely to succeed at this project with unwavering commitment than anything short of it. But, alas, that is my struggle and the struggle of many other Anglo immigrants who were never coerced into moving here and so must constantly remind themselves with every new trial why they chose to. The Sodom that we hesitate to leave is not burning up in flames behind us; it is perfectly serene and in many ways more desirable (and to the discredit of my metaphor, it is not even that morally inferior). Our floundering is what is likely paralyzing our progress, making our immigrant experience something that never finds resolution. You remain in this in-between place, this no-man’s land immigrant status, when you don’t fully dive in.

As an Anglo Jew, you need a good reason to move here. A reason that will be convincing enough to push you over the edge, so that you can fully commit and make this move work. A “Why” that outweighs all of the value that you are leaving behind, and which also gives you peace of mind when you know what to respond to those exasperated Israelis in the cab or in the pub. Ask yourself: is the basis for my Aliyah dependent upon a temporary state of mind or is it based on values that I am married to. If it is the former, though we will miss you, you may be better off returning to your native land where you can live with more security and less resentment. If it is the latter, then you have what it takes to endure the challenges ahead and make the most of this special special place.

About the Author
Originally from Pawtucket "the Bucket," Nava now lives in holy Jerusalem. She studied media theory and production at Brown University but her real concentration was in Judaism since all she could think about was her Jewish identity complex. Today, she is not only a post-grad truth seeker, but also a wife and a mother.
Related Topics
Related Posts
Comments