Media reaction to the David Blatt firing has been troubling. Journalists have rushed to collect outrageous comments allegedly made by Israelis on social media, once again fitting Israel into their preconceived narrative of racist aggressor.

For instance, Mike Smith at AFP wrote, “One sports commentator even compared Israelis’ hate of James to their hate of Islamist movement Hamas, while insulting and racist comments written in Hebrew littered his Instagram account.”

And Joe Vardon wrote the following for Cleveland.com: “Israelis have apparently gone bonkers over the Cavaliers’ firing of David Blatt, to the point of comparing LeBron James to a terrorist organization while blaming him for running Blatt out of town.”

Israelis are having a good laugh about Vardon’s lack of familiarity with the Hebrew language, but unfair reporting shouldn’t be a laughing matter. Why is it unfair?

First of all, media outlets are taking the “terrorist comparison” out of context. Here’s the actual quote given to the AFP in context: “LeBron James is now the most hated person in Israel …It’s a little bit joking and a little bit true. These days I can only compare the Israeli hate for LeBron James to the hate for Hamas,” Israeli reporter Sharon Davidovitch explained to the AFP. 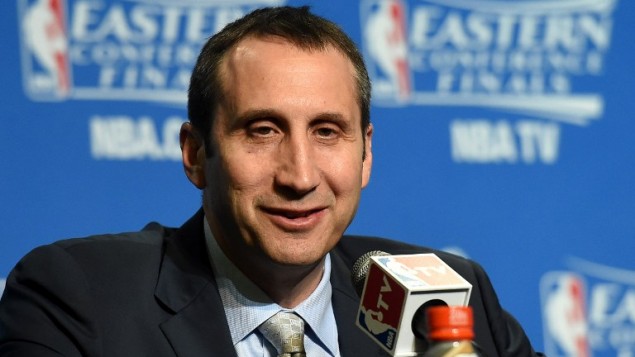 David Blatt of the Cleveland Cavaliers on May 26, 2015 in Cleveland, Ohio (Jason Miller/Getty Images/AFP)

Why are media outlets reporting on a silly joke as if it’s a serious matter that summarizes the feelings of millions of Israelis?

Of course, reporters have also jumped on some racist/obscene/vulgar comments written in Hebrew on social media. To be clear, I condemn those comments and think the people who are making them need to reevaluate their lives. But why is mainstream media ignoring the MANY anti-Semitic comments made about Blatt on social media?

It’s been left to people and outlets outside the mainstream, such as Israellycool and Yair Rosenberg, to catalog the vile anti-Semitism that has been directed at Blatt/Israel. One example of MANY:

Cavs fire David Blatt!!!!!!!!!! Zionist Jew got what he deserved

It’s not a surprise that the mainstream media isn’t reporting on the anti-Semitic backlash spurred by Blatt’s firing. After all, they’ve steadily ignored the way in which Blatt was often stereotyped: countless articles pegged him as aggressive/abrasive, arrogant and the consummate outsider (the classic Jewish stereotype).

The narrative of Blatt-as-outsider, awkward and unloved, was practically textbook. You can read between the lines and easily find a stereotypical Jew unwilling to assimilate to the dominant culture. The incessant talk about Blatt’s inability to adjust had a subtext to it: He was foreign, alien, and just didn’t fit into the NBA.

I’ve reached out to many basketball journalists via social media, including ESPN journalists, such as Ethan Sherwood-Strauss, Amin Elhassan, Zach Lowe; Sports Illustrated media members, such as Richard Deitsch and Ben Golliver; and Cleveland writers, like Terry Pluto, Joe Vardon, Bill Livingston and Dave McMenamin. No one has responded thus far (except Terry Pluto on Twitter. And Bill Livingston at least briefly raised the issue of anti-Semitism, before concluding it wasn’t a factor in the firing).

It seems that the mainstream basketball  media, which justifiably pounced on Donald Sterling for racist comments, isn’t interested in examining what role David Blatt’s religion/nationality may have played in his media coverage, or in reporting that his firing unleashed a wave of social media anti-Semitism.

About the Author
Eric Danis lives in Modi'in, Israel with his wife and three cute kids. Whenever possible, he tries to dispel misconceptions and stereotypes about Israel and Judaism.
Related Topics
Related Posts
Comments
Advertisement