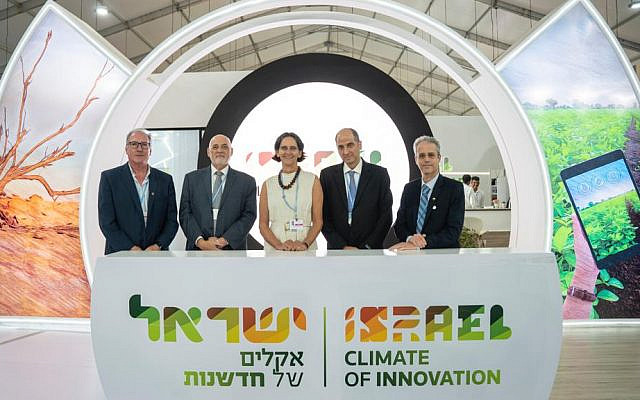 Noga Kronfeld-Schor and Gideon Friedman, chief scientists, respectively, at the Ministries of Environment and Energy, host one of 40 panels of Israeli experts at the COP27 Israel Pavilion. (via Twitter)

The Sharm el Sheikh Climate Convention “COP27” is now history. Long before the gavel closed the deliberations, it was recognized as being among the less auspicious gatherings in the history of multilateral environmental agreements. The meeting was mired in controversy from the outset – between Egypt’s abysmal human rights record and dubious corporate sponsorships, especially that of 120-billion plastic bottle producer Coca-Cola. But the real problem was the underwhelming objectives on the COP27 agenda, and the even more anemic outcome.

Having attended the conference and some of the negotiation sessions, my general takeaway, for those of us concerned about the planet’s future, was not encouraging. Beyond the inevitable diplomatic obfuscations (translated quite precisely by Gretta Thunberg’s “blah blah blah”), COP27 raises concerns about the ability of developing and developed countries to reach common ground on the most pressing issue humanity faces today.

The final resolutions approved have been widely reported by now, largely framed by what didn’t get passed and absent any real substantive triumphs. Climate advocates had hoped to attain more meaningful commitments to cut emissions across the world and adopt target dates for ending fossil fuel use. One of the big disappointments from last year’s COP at Glasgow was the last-minute dilution of a resolution that called for a phase-out of coal-generated electricity. Once again, the Sharm agreement only speaks of a “phase down of unabated coal.”

In general, delegates from Western countries found themselves fighting to preserve language and substantive expectations that have already been approved by the international community at past COPs. Mostly they succeed: Attempts to return to the defeatist 2.0-degree average increase were scuttled with the more ambitious 1.5-degree Glasgow target preserved. Unfortunately, increasingly few people attending really believe it will be achieved. In other cases, attempts to stop provisions that recognize the legitimacy of “low emission energy” (a euphemism for natural gas, despite its significant contribution to global warming) failed.

Prior to the convening, many hailed the Sharm summit as the “Africa COP,” only the second time a major climate convention was hosted by an African country, with all the attendant symbolic and practical implications. The presiding president of past COPs traditionally was a representative of the host nation. And the president enjoys enormous influence over the language and compromises put on the table for debates and voting. As an African nation, Egypt seemed to happily take on the role of champion for its continent’s agenda. Critics were quick to point out that Egypt remains highly beholden to Saudi Arabia – which offered another explanation for the lack of interest in any new emission reduction targets.

The “headline” achievement, of course, was the intentionally vague commitment to establish a fund for payment of “loss and damages” to developing countries. This idea has been advanced by climate justice advocates for decades. But demands among developing countries have grown in recent years, climbing to the top of their climate wish list. Until this week’s decision, wealthier nations, who are supposed to pay for the damage caused by their historic emissions had refused to accept any responsibility for past carbon released into the atmosphere. But as COP27 dragged on, the 130 developing countries who make up the united “G77” negotiations group, essentially paralyzed any progress. The EU finally decided that it was time to make symbolic concessions. This left the US little choice but to fall into line or face the blame for a colossal climate fiasco. It opted to water down language and accept an anemic agreement.

While one can understand the glee of Third World representatives and their civil society advocates at bringing old “colonial” powers to their knees on the “Loss and Damage” controversy, substantively, it’s not clear what they actually gained by their vigilance. There is still no budget assigned to the newly established Loss and Damage account. Neither is it clear exactly who is supposed to fill up these coffers.

Donor nations continue to see bilateral assistance as the most effective and politically advantageous format for providing aid. They remain loath to send their taxpayers’ money to a giant black hole that they can’t control and whose success is difficult to measure. Indeed, 13 years ago, the same UN forum established a Green Climate Fund with the expectation that the international community, especially developed countries, would pony up 100 billion dollars each year to address the climate-related problems of the developing world. Sadly, not only has this level of funding never been reached, but fund managers often gripe that they actually lack appropriate climate proposals from developing nations.

On the moral low-ground: The developing nations

Developing countries continuously frame climate discussions about Loss and Damage as a way to offer their neglected denizens a chance to be heard, to be seen and respected. Their voice was definitely heard loud and clear in Sharm el Sheikh, with countless examples presented of climate change’s horrific impact destroying quality of life and starting to destroy life itself. Yet, even the nature of their ostensible “moral victory” is not clear: Climate czar John Kerry has repeatedly emphasized that Loss and Damage in no way constitutes a “compensation” gesture, which might connote past environmental sins and expose Western nations to legal claims.

The truth is that the developing countries’ complicity with China and Saudi Arabia in sabotaging more ambitious mitigation targets runs against their real interests — surely those of their children. As average global temperatures continue to inch up above the 1.5 degrees threshold towards 2.0 and beyond, they will have to face even more horrendous climate impacts. Especially vulnerable are the low-lying island nations and countries with expansive coastal zones.

With all due respect to historic emission trends, the future of the planet presents an urgent need for pragmatism. In 1992, when the United Nations Framework Climate Convention was first approved in Rio De Janeiro, developing countries were responsible for only 25 percent of total global emissions. Today, they are responsible for far more than 50% of the global emissions profile. Indeed, per capita emissions in many European countries, like France, the UK, and Denmark are far lower than some African countries, such as South Africa. If developing countries would prioritize transition to low-carbon economies and renewable electricity as highly as they do “Loss and Damage” compensation, they would probably better serve their long-term interest.

Undermining the efforts: The effect of a growing population

The deafening silence with which the climate conference greeted the notable November 15th landmark, when the world reported its 8 billionth baby joining the human race, is instructive. The link between global population growth and the rise in greenhouse emissions is both intuitive and empirically proven. I don’t know a single expert in the field who believes that we will ever reach net-zero emission levels if the planet’s population continues to expand at 1% a year (that’s 80 million more people a year now!) Every child is born with a God-given right to a carbon footprint, to enjoy mobility, a diverse diet, and air conditioning.

UN projections that show the planet’s population continuing to burgeon past 10 billion by the century’s end assume that most of this expansion will happen in Africa. At that time, it is fair to assume that the atmosphere’s “historic greenhouse burden” will look very different. By then, the futility and the destructive nature of the “blame game” that characterizes so much of present informal and even formal climate change discourse will be even more apparent.

During the lunch breaks at Sharm, participants could pay for uninspired fast food and bottled water. But Coca-Cola soft drinks were absolutely free of charge. It made for bad optics. Nonetheless, most of the 46,000 folks attending didn’t hesitate. Ultimately, paying for any resulting dentistry and diabetes treatment should not be excessive. The price of our continued climate inaction, however, is beyond imagination.