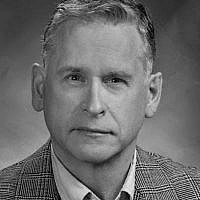 The Blogs
Martin M Barillas
Apply for a Blog
Advertisement
Please note that the posts on The Blogs are contributed by third parties. The opinions, facts and any media content in them are presented solely by the authors, and neither The Times of Israel nor its partners assume any responsibility for them. Please contact us in case of abuse. In case of abuse,
Report this post.

The Netherlands government has terminated funding for the Union of Agricultural Work Committees (UAWC), one of six Palestinian nonprofit groups linked to the terrorist Popular Front for the Liberation of Palestine (PFLP). This came more than two years after an IED planted by UAWC members near the town of Dolev on the West Bank killed 17-year-old Israeli Rina Schnerb, who was hiking with her brother Dvir and her father, Rabbi Eitan Schnerb.

The Netherlands had given €21.5 million to the UAWC, but suspended funding in 2020 after senior UAWC officials were indicted for Schnerb’s murder. An investigation by the Dutch parliament determined that more than 30 employees of the UAWC had also been PFLP leaders and operators from 2007 to 2020.

Foreign Affairs Minister Ben Knaepen and Development Coordination Minister Tom de Bruijn wrote in a joint report to the parliament, “no evidence has been found of financial flows between the UAWC and the PFLP.” However, they noted that “… there were ties at the individual level between UAWC staff and board members and the PFLP for some considerable time. The great number of UAWC board members with roles in both organizations gives particular cause for concern.”

The joint report continued, “[F]or the government, the findings on individual links between the UAWC and the PFLP and the lack of openness about this from the UAWC, also during the investigation, are sufficient reason to stop financing the activities of the UAWC.” Knaepen and de Bruijn said that UAWC had betrayed the trust of the Dutch government and should have revealed its ties to PLPF.

The report said, “The large number of board members of UAWC with a dual mandate is particularly worrying,” and revealed that the two UAWC employees implicated in Schnerb’s murder were paid salaries funded in part by Dutch aid money.

In 2019, just days before Schnerb’s murder, author and investigative journalist Edwin Black reported that UAWC’s links to PFLP had long been known. He cited a 1993 report to USAID that found that PFLP’s agricultural extension services were provided by UAWC. Black quoted the author of the study, Professor Glenn E. Robinson of the U.S. Naval Postgraduate School, who said that UAWC was “linked and affiliated to” the PFLP and “shared resources with” it. Black also revealed in his report that in 2017 Israel’s Shin Bet security agency notified UAWC of a determination that groups under its control were operating under the auspices of the PLPF in the Gaza Strip.

According to NRC, UAWC director Fouad Abu Saif denied that his employees were active with PFLP. Abu Saif said, “Employees are not allowed to be members of or active in any political group,” adding, “Whether people have political sympathies, we as an organization cannot and should not control. And if someone was active in secret, we as an employer didn’t know that.” He said that the decision to end funding was “surprising” and “sad.”

Hundreds of millions of euros from EU taxpayers have funded illegal Palestinian settlements in Oslo Accords-designated Area C, while UAWC has been building roads, terracing, and retaining walls without applying for Israeli building permits, as required under the Oslo Accords. While UAWC financial reports are difficult to obtain, Black reported that its 2014 income topped $43.1 million.

NGO Monitor, which investigates purported civic organizations and human rights groups, called on all European countries to “take note” of the Netherlands government’s decision, saying that “all other donor governments need to immediately review their vetting and auditing processes for NGO partners to ensure funds are safeguarded from diversion to terror organizations.” NGO Monitor reported that  Belgium, Canada, Denmark, France, Germany, Italy, Norway, Spain, and the UK continue to fund UAWC.

For its part, the Israeli Foreign Minister released a statement, saying “UAWC is an organic part of the terrorist group PFLP, as the five other organizations Israel declared terrorist organizations are.” While praising the decision to continue to fund Palestinian water projects through “legitimate aid organizations,” the ministry declared, “Israel will continue the conversation with the Netherlands and other countries about these organizations and how aiding them violates Israeli law.”

The PFLP is one of the most notorious Palestinian terrorist groups, having been so designated by the US, EU, and other countries. Linked to Iran, PFLP has conducted numerous deadly suicide bombings, and also took responsibility for the 2014 Jerusalem synagogue attack in which four worshippers were murdered and seven wounded.

About the Author
Martin Barillas is a former US diplomat, serving in Europe and Latin America, as well as with the division for Politico–Military affairs. At the latter, he was granted the Meritorious Honor Award for valuable services rendered in the Office of International Security Operations. He was co-author of Hidden Killers, a report to Congress concerning the threat of landmines and ordnance to civilians. Following foreign service, Barillas designed and implemented pro-democracy programs funded by the National Endowment for Democracy and the US State Department. He traveled widely in Central America, Mexico, and the Caribbean to advance governmental and electoral transparency. He has written and edited articles for several media outlets. Shaken Earth is his breakout first novel.
Related Topics
Related Posts
Comments