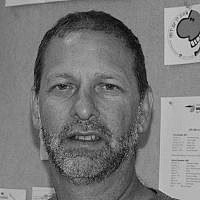 The Blogs
David Lerher
Apply for a Blog
Advertisement
Please note that the posts on The Blogs are contributed by third parties. The opinions, facts and any media content in them are presented solely by the authors, and neither The Times of Israel nor its partners assume any responsibility for them. Please contact us in case of abuse. In case of abuse,
Report this post.

On April 22, 1970, I participated in the Earth Day march in Raleigh, North Carolina. I was 14 years old and I marched with my middle school, whose administration and teachers had decided to participate in the first national teach-in on the environment in the US. Environmental concerns were part of wider social upheaval in American society that included the Civil Rights movement, the anti-Vietnam War movement, the Anti-Nuclear movement, and the Feminist movement. This social revolution was also accompanied by the rise of youth culture and protests, sit-ins, and teach-ins became as much a part of that culture as was music, drug use and sexual freedom. In a sense, everyone was looking for a cause and at a very young age, my cause became the environment. Environmental awareness in the US really took off in the early 1960s, with the publication of Rachel Carson’s influential book, “Silent Spring,” which first raised the alarm of the danger of indiscriminate pesticide use on the environment. In the late ‘60s and early ‘70s, the US government, under President Richard Nixon, was taking steps to protect the environment through the enactment of series of laws like the National Environmental Policy Act in 1969, the Clean Air Act in 1970 and the Clean Water Act in 1972. In December 1970, the US established the Environmental Protection Agency, the prototype for environmental protection offices and ministries in governments around the world.

For the last 50 years, the United States has led the world enacting laws and establishing institutions to protect the environment. When I moved to Israel from the US in 1978, the lack of concern and public awareness about air and water pollution, solid waste disposal, and natural resource management was startling. To be fair, Israel was still a developing nation with immediate concerns about growth, scarcity, and security. Israel established its own Ministry for Environmental Protection (Quality) only in 1988. Over the past 30 years, the Israeli public’s awareness and concern for the environment and for protecting our natural resources has grown. Today, environmental concerns are part of Israeli political discourse. Though national politics remains focused on foreign affairs, defense, the Palestinian – Israeli conflict, the economy and religion, local politics is often dominated by debates centered on environmental concerns over the use of beaches, the loss of open space, polluted streams or air quality.

The birth of the environmental movement in the ‘60s and ‘70s in the US led to the establishment of Earth Day as an international day marking the importance of protecting our planet as a whole. While people faced similar environmental challenges around the world, protecting the environment remained, however, a local issue. Protests, public campaigns, the enactment of laws, the introduction of regulations and enforcement were usually about specific local environmental problems like oil spills, air pollution, polluted rivers, and land contamination. Often those who caused the problems were not the ones who suffered from impact of the pollution. An oil spill by a multi-national oil company may impact local fisheries; an industry dumping waste into the ground can contaminate a local aquifer and make the water supply for a nearby town, undrinkable. Economists call situations where a member of society bears the cost but no benefit of a byproduct of an economic exchange, a negative externality. The environmental movement is an attempt to combat these negative externalities.

In the beginning of the last century, scientists had begun to debate the impact on the planet of the large amount of carbon human beings were dumping into the atmosphere. This “mother of all externalities,” however, was only recognized by the general public, as a global threat in 1992, with the introduction of the United Nations Framework Convention on Climate Change launching a global effort to combat climate change. Following the 1992 Earth Summit in Rio de Janeiro, a series of international conferences, scientific research and reports and agreements have led to 195 countries ratifying the Paris Agreement in 2015.

The current US administration has abdicated its role as a steward of our planet. President Trump’s declaration of withdrawal from the Paris Climate Agreement (which will only take effect in 2020), and the ongoing corruption in the management of the US Environmental Protection Agency has left the world like ancient sailors without a north star. While neither Israel nor our Palestinian and Jordanian neighbors are major greenhouse gas producers, the negative externality of climate change is already being felt in our region. The rise in average temperatures, the drop in annual precipitation, the frequency of extreme storms, and biodiversity loss can already be measured. Climate change in the region will continue to strain our limited water resources, raise sea levels destroying beaches and threatening coastal cities, spark extreme weather events (floods and fires), and create instability in neighboring countries leading to civil wars, the influx of refugees, and a threat to our security.

Where there is no top-down leadership, leadership must arise from the bottom-up. At the September 2017 Cross-border Environmental Cooperation Conference held at the Arava Institute, over 30 Israelis, Palestinians, and Jordanians signed an open letter calling on President Trump to rescind his declared intention to leave the Paris Climate Change Agreement. On Earth Day, 2018, we must raise our voices here in the Middle East and around the world to remind the leader of the United States, that Climate Change is real and can only be mitigated if we all do our part and we all work together.

David Lehrer is the executive director of the Arava Institute for Environmental Studies.

About the Author
David Lehrer is the executive director of the Arava Institute for Environmental Studies.
Related Topics
Related Posts
Comments