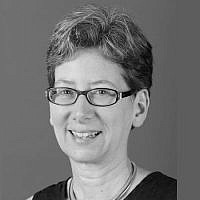 The Blogs
Mirele B. Goldsmith
Apply for a Blog
Please note that the posts on The Blogs are contributed by third parties. The opinions, facts and any media content in them are presented solely by the authors, and neither The Times of Israel nor its partners assume any responsibility for them. Please contact us in case of abuse. In case of abuse,
Report this post. 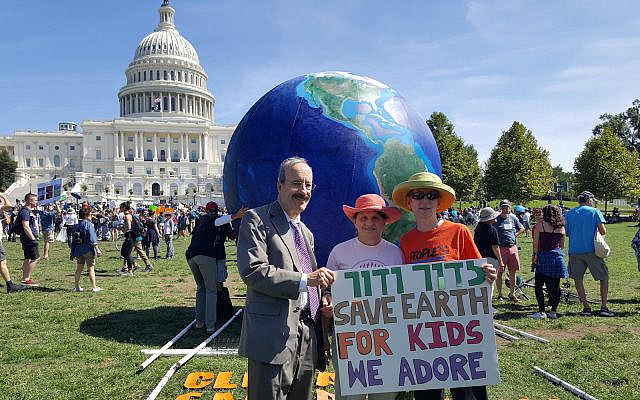 As we shelter in place to flatten the curve of the COVID-19 pandemic, a bigger crisis is looming. The climate crisis is harder for us to grasp, but it is even more dangerous.

We’ve learned some important lessons from COVID-19. Our leaders knew a pandemic was coming but they ignored it.  Now we know, without the shadow of a doubt, that the longer a life-threatening risk is ignored, the more the bodies will pile up.

This year, as we sit at home on Earth Day, we need to ask ourselves some hard questions.  When this pandemic is over, are we going to go back to business as usual?  Will we continue to allow our taxes to subsidize fossil fuels that are threatening us with flooded cities, empty reservoirs, food shortages, millions of people displaced and millions dead?  Will we accept that these dire outcomes are unavoidable even though proven solutions are available – if only we can overcome the political influence of industries with vested interests?

There is another lesson we can learn from this crisis.  That is that Congress can move quickly to pass far-reaching legislation when there is enough pressure to do so.  As the climate crisis worsens, this is a lesson we cannot afford to ignore.  We must rise up to put extreme pressure on Congress to take action on climate now, before it is too late.

One year ago, on Earth Day, we launched Jewish Earth Alliance.  Recognizing that Jews in Washington, D.C., could play a unique role in mobilizing Jewish advocacy for climate action, we began connecting Jews around the country with Congress, empowering them to channel their concern about climate change into direct, constructive action.

Our message is straightforward: Climate change is a moral challenge that calls for urgent action informed by responsibility, compassion, and solidarity. Like COVID-19, the effects of the changing climate reveal the true costs of inequality and injustice. While we are all suffering, the people paying the highest price, the people for whom this is a terrible disaster, are those marginalized by racism and poverty.  The moral choices posed by global calamity are now starkly apparent.

We have visited Congress with this message every month since last May, delivering letters from Jews around the country that call on legislators to introduce and pass far-reaching legislation to slow climate change  Before the COVID-19 crisis erupted, we had resigned ourselves to waiting until January 2021, the start of a new session, for Congress to be ready to seriously tackle climate change.  Unfortunately, we may still have to wait until then. In the meantime, Congress is making decisions that will make climate change worse, not better. Legislation passed in response to the COVID-19 crisis  may have long term repercussions on the ability of our country and world to meet the deadlines scientists have laid out to avert the worst climate change scenarios.

Climate change is a Jewish issue. In the last couple of years, we have seen a change in perception in the Jewish community.  Recognition of the impact of climate change has been growing as natural disasters have made their way across the nation.  Jewish communities in the New York area are still recovering from Superstorm Sandy of 2012.  In 2017, 2,000 Jewish families in Houston lost their homes to Hurricane Harvey.  In 2017 and 2018, Jewish summer camps in California burned to the ground in wildfires. It has become impossible to ignore the warning signs.

These changes in perception have contributed to growing interest among Jews to participate in our monthly action campaigns.  In May 2019, when we began, we delivered 30 letters to Congress. By February 2020, we were able to hand-deliver 250 letters from Jews around the country to 45 members of Congress.  With increasing support from constituents in states from Pennsylvania to Oregon, we have been able to develop working relationships with key staffers.  Our voices are being heard on Capitol Hill.

As Congress debated the COVID-19 relief packages, Jewish Earth Alliance convened 29 national and grassroots Jewish groups to sign on to a letter calling on legislators to consider how decisions made now will influence our nation’s preparedness for future threats from the potentially devastating effects of climate change.  The signers also called on Congress to resist calls to bail out fossil fuel industries which would delay the critically important transition to renewable energy.

This Earth Day, the need for comprehensive and ambitious action on climate change is greater than ever.  With Congress forced by COVID-19 to pass legislation at an unprecedented pace, we must stay engaged.  The shameful, avoidable, lack of preparations for COVID-19 must not be repeated. This Earth Day we must demand that Congress take action now to protect us from the accelerating crisis of climate change.

Mirele B. Goldsmith is an environmental psychologist and founder of Jewish Earth Alliance.  She lives in Bethesda, MD.

About the Author
Dr. Mirele B. Goldsmith is an environmental psychologist, educator, and activist. She is a founder of Jewish Climate Action Network-NYC.
Related Topics
Related Posts
Comments