I am often inspired by local heroes. People who do the right thing at the right time regardless of other things that might be going on at the time. People who go the extra mile and reach out and help one another even if it isn’t the most convenient thing to do. Sometimes that inspiration comes from people in our own neighborhood, our own local hero. This is the story of one such local hero, a local hero from east Jerusalem whom we can all be inspired by.

A man in east Jerusalem decided to check in on his relatives after not being able to reach them by phone one recent morning. He knocked on the front door but didn’t get a response. There was a strange burning smell emanating from the doorway, but he didn’t see any flames. The concerned relative immediately called emergency services for help. 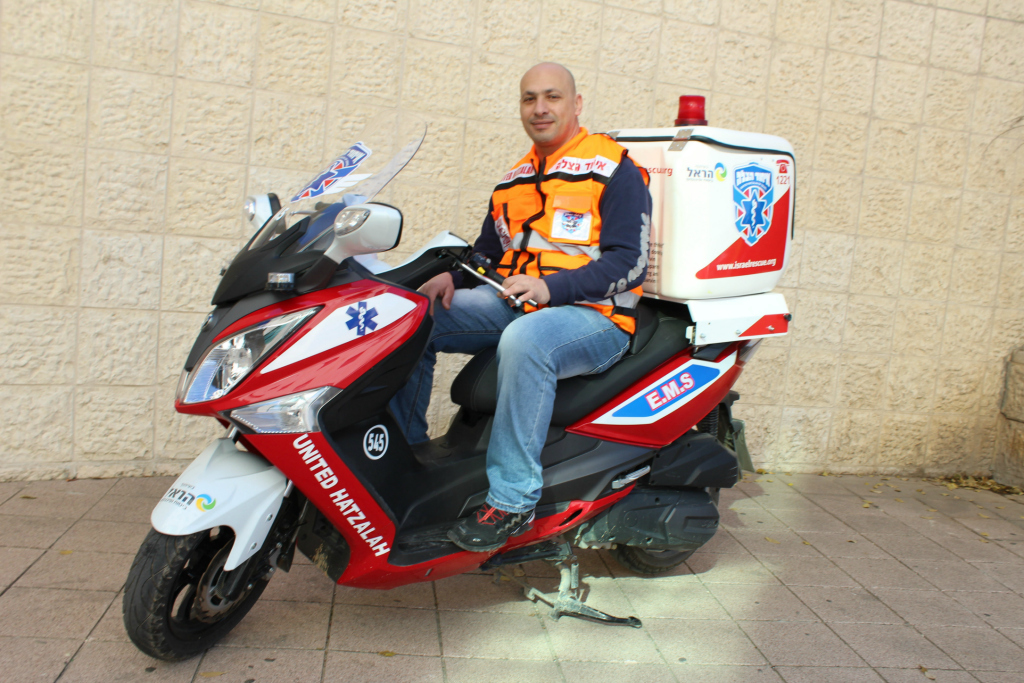 Roman Firas on his ambucycle

Roman Firas, a Muslim volunteer EMT from the neighborhood and a professional medical translator, was at home when the United Hatzalah dispatch center alerted him to the emergency nearby. He jumped on his ambucycle, raced to the address, and arrived in mere minutes. Firas ran up to the front door, turned the knob, and found it unlocked. Knowing the family could be in danger, he opened the door, and a huge gust of smoke billowed out. Firas instinctively turned back for a breath of fresh air, then entered the residence. He immediately saw the lethal threat – a wood-burning stove had been lit all night long and had consumed the oxygen inside the home and replaced it with smoke. All of the windows were closed, which caused everyone inside to inhale the poisonous gasses.

Firas quickly opened the windows to facilitate fresh air flow. He then searched the bedrooms and located two parents and three children. The mother was losing consciousness rapidly while the father and children were all semi-conscious. The experienced EMT immediately provided the victims with high-flow oxygen. As they breathed in the oxygenated air, they slowly began to regain consciousness. After an additional twenty minutes, ambulances arrived and Firas helped transfer the now-stable patients onto stretchers ready for transport.

As the patients were whisked away to the hospital, Firas breathed a sigh of relief. He knew that the early response he had provided had likely saved some if not all of the family members’ lives.  Had they waited the additional time it took for the ambulance to arrive, continuing to breathe in the toxic fumes, they may not have all survived.

Founder and President of United Hatzalah Eli Beer explained why it is so important to have a chapter of volunteers in east Jerusalem. “Ambulances often have to wait for military or police escort before going into many of the neighborhoods in east Jerusalem. Often the ambulances can be waiting outside the neighborhood for 30 minutes or longer. When we founded United Hatzalah we aimed to provide the fastest medical response to all residents of Israel, regardless of their religion or background. We opened a chapter in east Jerusalem as well as other Arab cities such as Kfar Kassam and Tayibe in order to provide fast EMS response to the residents who live there. Our volunteers from those areas are mostly Muslim and come from within the community. That way when an emergency occurs, people from the community can provide the fastest response without having to wait for an escort or ambulance. They go and they help, and that is what we are all about. I am proud of every single one of our more than 300 Muslim volunteers across the country, and especially proud that Roman was able to save this family. By building stronger and safer communities across the country we are building a stronger Israel for everyone.”