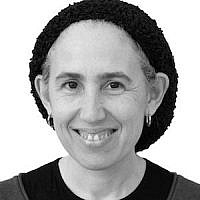 The Blogs
Janice Block
Apply for a Blog
Please note that the posts on The Blogs are contributed by third parties. The opinions, facts and any media content in them are presented solely by the authors, and neither The Times of Israel nor its partners assume any responsibility for them. Please contact us in case of abuse. In case of abuse,
Report this post.

In a public debate on higher education, two opposing sides were debating the need for so many young people in the US to obtain university Batchelor’s degrees. One debater, an immigrant from India, pointed out that, in places like India and China, people look to the US as an example of educational excellence. They attempt to model their educational institutions on the US system of higher education, and when they hear that people in the US are trying to scale back, or remake the US educational system, they are thrilled. They say to themselves, if so, “we will eat their lunch.”

On the other side of the debate were the usual arguments — that university education has become so expensive that it places a great burden on the graduates; that it does not really train students in required job skills; that there has arisen an “inflation” of degree requirements, in which employers will only consider college graduates for jobs that do not require a university degree in their essence. Important points, all. The Batchelor’s degree has become a status symbol, a sign that a person belongs to the qualified “elite,” rather than actually making a person more qualified — at least for many people who are not so scholarly inclined.

But, market forces being what they are, and with US university tuitions + living expenses frequently costing upwards of $60,000 per year, more and more people will look toward inexpensive options, like online degrees. It’s not an issue for scholars in ivory towers to debate over — it’s inevitable. And when the people turn more and more to on line education, US universities will find that — lo and behold — there is competition from all over the world!

I am a joint Israeli and US citizen, so I keep track of the educational situation in both countries.  One of the delightful aspects of making Aliyah has been the fact that higher education is so much more affordable in Israel, as compared to the U.S.

But — has anyone noticed that, frequently, immigrants from countries where education is much less costly can get good jobs in the US despite their foreign degrees? Student loan free? I’ve noticed.

The thing is — I suspect that the US economy has maintained its strength, even as it has transitioned from a production economy to a service economy, because of the education of its population. A service economy alone wouldn’t be enough to support a thriving economy. But — as US degrees are respected all over the world, US graduates often find good jobs which are associated with international corporations.

Probably true — one way or another, India and China will get a big bite out of our lunch.

About the Author
Janice Block is a pediatrician, a wife, a mother, and a student of complementary/alternative medicine. She made Aliyah with her family in 2002.
Related Topics
Related Posts
Comments