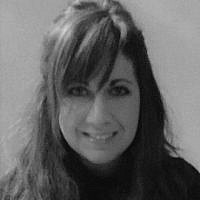 The Blogs
Malka Simkovich
Apply for a Blog
Advertisement
Please note that the posts on The Blogs are contributed by third parties. The opinions, facts and any media content in them are presented solely by the authors, and neither The Times of Israel nor its partners assume any responsibility for them. Please contact us in case of abuse. In case of abuse,
Report this post. 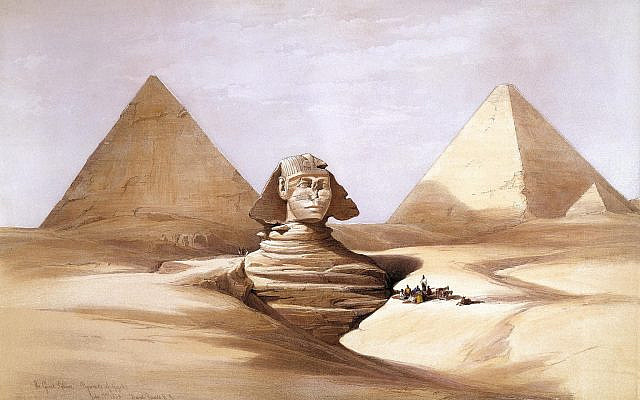 The Great Sphinx and Pyramids of Gizeh (Giza), 17 July 1839, by David Roberts

The Israelites’ exodus marks the process by which the covenantal people are trained to construct a new society that in every way stands apart from Egypt. The Egyptian civilization, the Torah suggests, mistakes God’s magnificent creations for the deity Itself. Rather than worshiping an unseen god which transcends and controls nature, the Egyptians worship gods who control individual natural domains, such as the sun, the sky, and the Nile river. These irascible gods require constant attention and care so as not to unleash their unsuppressed rage upon humankind. These gods do not care to remain in the realm of the unknown. Instead, they enter the physical realm and are embodied in physical form. The Egyptians, in turn, worship these visible embodiments of the gods who provide them with sustenance, and they worship Pharaoh as the medium connecting them to these gods. But if the gods whom the Egyptians worship can be appeased and manipulated by the Egyptians, then the worship of those gods is tantamount to self-worship. The Egyptians who worship the gods that they claim to control ultimately worship themselves.

Pharaoh mocks the Israelites’ worship of the unseen god as absurd and insane. He cannot accept Israel’s ludicrous desire to worship this mysterious, unknowable God. In our first encounter with this ruler, we hear him mock this so-called god before his court. Who is this God, Pharaoh asks, that I should listen to him? I have never known this God. Pharaoh’s continual denial of the one true God is a denial of the unknowable. It is a denial of unseen forces that humanity cannot manipulate through homage and service. The key word of Exodus story is the Hebrew world for knowledge, because the process of exodus and redemption functions to bring knowledge of this unseen God to all people.

Because Egypt worships its own resources and elevates its own leaders as deities, because Egypt worships what is in front of it and not what is beyond it, Egypt does not self-interrogate the moral nature of its society. Egypt does not have an ethos of communal responsibility for the individual. Egypt does not look for the hidden meaning behind natural phenomena in search of meaningful patterns. On the cusp of existential crisis, Pharaoh hires Joseph, who sees patterns in Egypt’s agricultural cycle, plans for the future, and saves Egypt. But when Joseph dies, the memories of his accomplishments die with him.  The wac-a-mole approach to crisis resolution extends into the Exodus story. Pharaoh’s response to each plague that assaults Egypt is grounded in his refusal to see a meaningful pattern of events controlled by an omnipotent and uncontrollable god who is responding to sins taking place in his own society. Pharaoh’s infallible semi-divine status means that, by definition, Pharaoh cannot be responsible for the ills pervading his society. The source of the problem have to have come from the outside. The source of the problem has to lie with the Israelites themselves.

For this reason, Pharaoh is unable to learn a lesson from the ten plagues wreaked upon Egypt. To his mind, the pain and suffering caused by the plagues cannot accumulate. The plagues cannot not represent anything meaningful to Pharaoh beyond his own understanding of the visible, material world, which he is empowered to control. The moment that a plague departs, Pharaoh hardens his heart once again, just as he had done at the very beginning. Each plague, Pharaoh reasons, can only represent the work of a sorcerous, nefarious, outside group at odds with the society that they had built. The Israelites are not victims. They are the source of the problem.

The God of the Israelites expects the covenantal people to detect patterns in the visible world around them and to interpret them as the work of  a deity which has power over them, which cannot be subject to their own manipulations, and which nevertheless desires a relationship with them. The people of Israel cannot tolerate idolatry, or the civilization which nurtures self-worship, by empowering humans with the ability to control the divine. But the Israelites’ initial failure to humbly submit to the unknowable eventually leads to their own backslide into idolatry. While awaiting Moses’ return from Mount Sinai’s peak, they have to reckon with the unseen, and in a panic, in a desire to construct a god that they can control, they resort to idolatry.

Israel is asked to recognize that, while everything we do impacts the Unknowable, we cannot manipulate the perfect and transcendant God. Yet as active members of a dynamic covenantal relationship, we have to believe that, contradictorily, God is personally engaged in our lives. In order to resolve this dualism, in order to bring our existence into sync with the unseen, we imbue our lives with the same ethical concern, the same personal care, that the Unseen God shows us.

The rabbis mock the literalism of the Egyptians and parody them as a civilization of self-worship and continual self-delusion, a civilization where breaking character meant compromising the very ethos of its civilization. As a child, I delighted in the midrashic story that Pharaoh secretly urinated into the Nile each morning. The Egyptians, this midrash presumes, would not have accepted that he needed to relieve himself. But they also likely were in on the game. The dual portrayal of the Egyptians as intentionally so dim-witted that they permit the desecration of one divine being at the expense of another speaks to the hall of mirrors the Egyptians have constructed: when they looked at one god, they saw only themselves.

Unlike the gods of the Egyptians, the God of Israel does not tolerate the Israelites’ dismissal of social suffering within the boundaries of Its community. When this takes place, the people of Israel are not permitted to attribute this suffering to dangerous outside forces that are not to be trusted. We are only allowed to ask: What internal systemic problem is this crisis the result of? What does this tell us about the health of our community?

If we conduct a true self-examination by seeking to identify the internal systemic problems which led to the crises that arose this past week, the source of the crisis is immediately evident. We silo women into their own category so that we can ignore the problem that women are not treated with integrity. When  something goes terribly wrong – when a woman is raped, when she complains about the assault and is ignored, when she is bribed into silence – the most important question is rarely asked:

What are we doing as a community that is protecting and facilitating this sin?

Instead of asking this question, we follow Pharaoh’s example by engaging in self-worship. The sin at hand is recognized, but treated as a perversion, a blight, an external impairment that attacks from the outside, and not as a cancer that grows within.   The sin is taken as a tragedy that is peripheral to our identity and one that has nothing to say about our community. We cut off the perpetrating source. We write petitions and rip up books and make promises and talk to ourselves. But mostly, we ignore the question of how the source germinated and took root in the body itself.

We do not treat abuse against women as a central crisis which every leader of our community needs to proactively identify, name, and work to solve. The reason for this is that we don’t treat women as central to our community. Like the ancient Egyptians’ treatment of the Israelites, we confuse the malady with the victim. We insist that what is broken is something that our corporal body can survive without.

We silo sexual abuse and sexual misconduct into its own category because we silo women into their own category. We then treat problems related to women as problems unrelated to everything around it.

The only way to solve the question of women’s physical safety and spiritual welfare in the Jewish community is to stop treating women as a separate category. Looking straight at women’s roles only exacerbates the problem because treating women’s problems as belonging to women continues to isolate it.  Like illusory floaters that one might see in their peripheral vision, but which move when one looks at them directly, talking about the “woman question” – whether in the contexts of the abuse of women, or the study of women, or the legal practices around women –  only exacerbates the problem of turning women’s issues into something separate, outside of the true polity, unrelated to who “we” are.

Something has gone very wrong, and now we stand at a fork in the road. Will we insist, like Pharaoh, that there cannot be something wrong with our own system, that the problem must lie with the evil individual who was not created by us but who colonized us, perpetrating our pure, authentic, ancient, normative, system? Will we treat the incident as an aberrance, will we perceive this human suffering as having nothing to do with us, will we ignore the patterns of history and sit tight until the next crisis, until the next rape, until the next suicide of a teenage girl whose voice wasn’t heard?

The right way to talk about women is to stop talking about them as a category, and to see the suffering of those in our community as reflective of a systemic internal problem that impacts everyone. Healing will begin when we stop talking about the physical welfare of women as an issue sequestered, and start talking about the spiritual welfare of our community. The call to self-interrogate, and to treat every person as a meaningful member of our community, lies at the heart of our nationhood. We aren’t seeing patterns when problems occur with women because we think of women as being separate. But to refuse to self-interrogate, to consider how crises in our community might reflect systemic problems that we perpetuate, is to engage in self-worship.

The Torah calls on its readers to look for patterns in history, and to look for patterns of sin and suffering. It calls on its readers to take responsibility for these patterns, rather than to blame human outsiders or divine outsiders for this suffering. As inheritors of the covenant, we are called upon to humble ourselves in the encounter with the Unknowable, to recognize that human power is an illusion, but that human suffering is anything but illusory. We are called to affirm the truth that to deny the reality of human suffering, and to deny our role in perpetuating it, is the gravest of sins.  To recognize this is to experience true redemption.

About the Author
Dr. Malka Z. Simkovich is the author of Discovering Second Judaism: The Scriptures and Stories That Shaped Early Judaism, and The Making of Jewish Universalism: From Exile to Alexandria. Her research focuses on universalist Jewish literature that emerged from Egypt under the Roman empire.
Related Topics
Related Posts
Comments