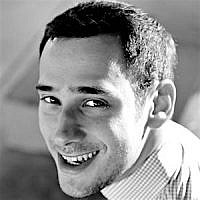 The Blogs
Danny Dubin
Apply for a Blog
Advertisement
Please note that the posts on The Blogs are contributed by third parties. The opinions, facts and any media content in them are presented solely by the authors, and neither The Times of Israel nor its partners assume any responsibility for them. Please contact us in case of abuse. In case of abuse,
Report this post.

I wear a kippah most of the time during my life, so it can be pretty obvious that I’m Jewish. As I was paying for a parking meter several weeks ago, about to enter an Ace Hardware, an older gentleman approached me and asked, “Excuse me. Could you please tell me what the Jewish community thinks of Donald Trump?” I first explained that there are many opinions in various Jewish communities, and I can’t speak for all of them. This was obvious to the man.

I went on to explain that if you look at Jewish history you will see that Jews have been persecuted in a number of ways for thousands of years. Jewish communities were destroyed and banished in the times of the First and Second Temples, the Spanish Inquisition, the Holocaust, and still today with acts of anti-Semitism across the world. Jewish immigrants were denied entrance into the United States in the 1930s and 1940s, until President Franklin D. Roosevelt took greater actions to rescue Jews from the horrors of the Holocaust in Europe. Now here comes Donald Trump. A man who proposes a ban on all Muslims from entering the United States. These vicious attacks on a minority group echo all too strongly for so many Jews. Prejudicial actions promoted the Holocaust, and labeling all Jews as baby killers or money hungry thieves is equal to labeling all Muslims as terrorists and proposing a ban.

While history is a strong claim on which to base an argument, I prefer to base my Jewish decisions on text, since the Jewish tradition is built and thrives on holy texts. We use these texts to lead Jewish lives, speak up for what is right, and stand against the immoralities that surround us. In fact, I believe it to be necessary to consult Jewish texts to make knowledgeable Jewish decisions. The daily morning service, shacharit, includes a blessing for the study of Torah and is typically followed by passages from the Torah, Mishnah and Talmud. I think it is a beautiful thing to start each day by studying words of Torah, as it helps to set intention through a Jewish lens.

The standard Talmudic passage Eilu d’varim (Shabbat 127a) reminds the reader that the following actions are not only what we expect of every Jew, but also ways to bring about a just world. It translates to the following: “These are the things whose fruits we eat in this world but whose full reward awaits us in the World to Come: honoring parents; acts of kindness; arriving early at the house of study morning and evening; hospitality to strangers; visiting the sick; helping the needy bride; attending to the dead; devotion in prayer; and bringing peace between people – but the study of Torah is equal to them all.” Three of these mitzvot, commandments by God, relate to Trump’s actions and inadequacy for the American Presidency:

When referring to Mexican immigrants, Trump said, “They’re bringing drugs. They’re bringing crime. They’re rapists.” How is that welcoming the stranger? How is that an act of love and kindness? Trump demeans women and brags about sexual assault. The Washington Post recently released a video in which Trump said: “I’m automatically attracted to beautiful women. I just start kissing them. It’s like a magnet. Just kiss. I don’t even wait. And when you’re a star they let you do it. You can do anything. Grab them by the pussy. You can do anything.”

Trump has been accused of rape or attempted rape, including the rape of a 13-year-old child, his ex-wife and attempting to rape a former business associate. A recent New York Times article tells the personal accounts of women whom have been sexually assaulted by Trump. Jessica Leeds, a traveling businesswoman, “sat beside Mr. Trump in the first-class cabin of a flight to New York. They had never met before. About 45 minutes after takeoff, she recalled, Mr. Trump lifted the armrest and began to touch her. According to Ms. Leeds, Mr. Trump grabbed her breasts and tried to put his hand up her skirt.” These words and actions are not examples of gimlut chasadim, acts of kindness. And we cannot expect somebody who harasses and assaults women to bring about ahavat shalom ben adam l’chavero, peace between people.

Jewish tradition teaches us that every person is created b’tzelem elohim, in the image of God. Jewish communities cannot-and should not-support such a candidate that treats others as if they are dirt on his shoes. And there are no excuses for giving such support. We are watching history repeat itself, and every single Jew has an obligation to prevent these horrors from rising.

I ended my statement to the man by the parking meter with the following: “Any person who considers him or herself a strong Jew and supports Trump is a hypocrite.” The Jewish people have known suffering for generations, and to support someone who proposes bringing the same to other peoples is horrifying. As the great sage Hillel once said on one foot, “What is hateful to you, do not do to your neighbor. That is the whole Torah; the rest is commentary–now go and study.” We see a great change in American history happening today. How will you use Judaism to be a light unto the nations and make your decision? Remember to vote November 8.

About the Author
Danny Dubin is a professional magician, performing for private parties and corporate events in Chicago and nationwide. He has a deep passion for Jewish text, observance and community. He received his undergraduate degree from American University (Class of 2016) and studied at Hebrew University of Jerusalem -Rothberg International School (Spring 2015).
Related Topics
Related Posts
Comments