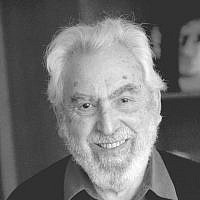 The Blogs
Yoel Sheridan
Apply for a Blog
Please note that the posts on The Blogs are contributed by third parties. The opinions, facts and any media content in them are presented solely by the authors, and neither The Times of Israel nor its partners assume any responsibility for them. Please contact us in case of abuse. In case of abuse,
Report this post.

It is time for electoral reform. The following provides an innovative and impartial remedy for unravelling the continuing political impasse in government formation. Either side of the political spectrum can benefit and more importantly, all of us will benefit from improved governance.

A critical fault with the current Israeli electoral system is that it fails to provide a wide enough differential between the number of votes received by the leading political blocs and this fact has made it extremely difficult for any major party in the Knesset to form a coalition government without paying too high a political price to smaller factions.

A narrow differential in any electoral victory weakens the ability of governments to govern. This applies irrespective of the type of electoral voting system in operation and one can see this, in the way this factor played itself out in the latest British and American arenas. Whilst Britain and America utilize different forms of first-past-the-post or winner-takes-all voting systems, this question becomes especially relevant when transposed into the Israeli political arena where the proportional representation (PR) voting system is in force.

Members of the Israel Knesset are not elected directly, but only as part of specific party lists. Each party list must garner enough votes in a general election to pass the qualifying electoral threshold to enter the Knesset, which is currently 3.25% of total valid votes cast. (It was 1.0% in 1951, 1.5% in 1992 and 2.0% from 2006 until 2017).  There are 120 seats in the Israel Knesset and the current threshold is the equivalent of four parliamentary seats.

In the April 2019 general election for the 21st Knesset, there were 6.3 million eligible voters; 4.3 million valid votes, and the threshold was set at 140,052 votes. The number of votes required per parliamentary seat was 32,860.

The allocation of the 120 seats in the Knesset to the various parties that pass the threshold is determined by first dividing the number of votes cast for each party list by the number of votes required to elect an individual member. This number is itself determined by dividing the total valid votes above the threshold, by 120. But, as fractions are discounted, this simple arithmetic does not produce a total of 120 seats. The “shortage” is rectified by redistributing the “lost” fractions by an agreed formula known as the Hagenbach-Bischoff–de-Hondt method internationally, and as the Bader-Ofer method in Israel. Any two parties can agree, prior to an election, to share their surplus votes before the final distribution. Parties can also merge or run together as a group or faction before the election. The votes for party lists that do not reach the threshold are lost.

The number of parliamentary seats won by each party list prior to and after the Bader-Ofer adjustment in the April 2019 Israel election (extracted from the Knesset website) was as follows:

I have chosen the outcome of the April 2019 election as the example in order to show that, if the electoral bonus system suggested here, had been in effect at that time, then there would have been no need for the three subsequent elections to have been called.

With one technical exception in 1969, no party or faction has ever won an absolute majority of seats and every Israeli government has had to be a coalition of parties. In 1984, when the Alignment and Likud blocs each had 40 seats, neither side could form a majority coalition and a National Unity Government was formed with the leaders rotating as Prime Minister.

Attempts have been made to reduce the number of factions that are voted into the Knesset, including raising the threshold levels and the introduction of the direct election for the prime minister. This latter disastrous hybrid system was enacted in 1992 and repealed in 2001. It sadly, consolidated the present cult of personality that has diverted the political debate from almost ever discussing policies. The result has also been the fracture of the Israeli electorate and a proliferation of political parties.

An essential element of democracy is for the minority to have a say without undue power and for the majority to have power, but not absolute power. All electoral systems falter when the differential between the two major blocs is too small. It is then that minorities, that hold the balance of power, demand a price that is well beyond their electoral strength. The smaller the differential and/or the greater the number of smaller factions, the more extreme are the concessions required to form a coalition government.

This phenomenon has occurred too often in Israel and it can, and needs to be, remedied.

There are those who wish to change the Israel electoral system by again introducing a presidential system, or by instituting a regional constituency system or a mixed constituency and proportional representational system. There are also those who wish, mistakenly, to eliminate the smaller parties by dramatically raising the threshold percentage. In view of previous bad experiences, innovations that require a two-ticket ballot, or systems that are out of character with the Israeli electorate, should certainly be avoided. In any event, none of those proposed changes address the crucial problem of narrow differentials that have plagued the Israeli Knesset. The argument that reducing the number of parties in the Knesset will stabilize the government is belied by past Israeli experience when the leading parties each had close to 40 seats each.

A relatively simple solution to the problem of narrow differentials in Israel is to expand the differential by awarding the party list that gains the highest number of popular votes, all the “spare” votes instead of spreading them amongst several parties as is the current practice under the Bader-Ofer formula.

Had this suggestion been employed in the April 2019 Israel election, then the leading party list would have had 41 seats and all the other party lists would have kept their valid mandates under the Israel proportional representation system without the necessity for any adjustment.

If all the 7 spare seats in April 2019 had been transferred to the leading party, then a coalition government would have been much easier to form with fewer concessions to the smaller parties, and the three subsequent elections could have been avoided. Israeli politicians, when asked about the difficulties of forming coalition governments, often reply, “it’s a question of numbers.”  Well, a simple mathematic adjustment, as is suggested here, could solve the problem. The Bader-Ofer re-distribution of otherwise “lost” votes is a mathematical calculation and while it provides a formula for redistribution of those votes, it does nothing to improve the differential between the leading party lists. It should be replaced by the now suggested electoral bonus system that will also increase the differential between the leading political blocs.

In most races (in sport for example) the winner is given a prize, no matter how narrow the margin of victory. Why not award the winning political party with all the marginal votes to consolidate its victory? The resultant increased differential would remove much argument as to who has won. It would strengthen the hand of the potential Prime Minister, temper the demands of the smaller factions, and would enable viable coalitions to be formed more speedily with fewer parties in relative comfort.  The quality of governance would be much improved.

This proposed electoral bonus system has the advantage over other proposed systems in that it guards the rights of minorities, it removes the argument as to who is the winner, it avoids the “winner takes all” system and yet provides the winner of elections with sufficient power to govern in coalition without having to pay too high a price to smaller coalition partners, it allows the runner-up a major voice in opposition or in coalition, and it retains the basics of the existing system which is familiar to the Israeli electorate which should enable all parties in the Knesset to give it serious consideration. It facilitates better governance and does not exclude the introduction of other representative and accountability improvements

About the Author
Yoel Sheridan was born in London England and made Aliya, with his wife, in 1973 in the middle of the Yom Kippur War. He was a Business and Management Consultant in Israel. Author of three books on British Jewry: "From Here to Obscurity" (2001), "Gold Ducats and Devilry Afoot" (2012), and "Antisemitism and the 1753 Jew Law Controversy" awaiting publication.
Related Topics
Related Posts
Comments