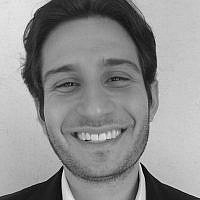 The Blogs
Shmuli Zema
Apply for a Blog
Please note that the posts on The Blogs are contributed by third parties. The opinions, facts and any media content in them are presented solely by the authors, and neither The Times of Israel nor its partners assume any responsibility for them. Please contact us in case of abuse. In case of abuse,
Report this post.

One generation will remember Mayim Bialik as the star of Blossom. Another will remember her for her part as a neurobiologist on The Big Bang Theory. And now the recent announcement that she will be a host of Jeopardy! adds another layer to Bialik’s television persona.

Yet Bialik’s life and career story transcends her roles on the screen. As a real-life neuroscientist, she also shatters stereotypes when it comes to perceptions surrounding women’s relative lack of interest in STEM fields (science, technology, engineering, and mathematics) careers — and her scientific bona fides will now once again take center stage on Jeopardy! when science-related categories are featured on the game show.

Bialik’s multifaceted identity goes even deeper. She breaks the glass ceiling — both in real life and on television — all while maintaining an observant Jewish lifestyle. This makes her a notable role model for all Jewish women and particularly for religious Jewish women. It also makes Bialik a microcosm of the narrative that the Jerusalem College of Technology (JCT) is vying to amplify in Israeli society and in the global Jewish community.

It is no coincidence, then, that Bialik was the ideal keynote speaker at the Friends of JCT gala in May 2018.

“What is so incredible about what the Jerusalem College of Technology does, and why I’m so honored to be here, is that I want to see Israel succeed and compete, and I think there is so much misinformation about Israel and what she is and what she’s not,” Bialik said at the time. “Organizations like JCT represent that tension and complexity while really honoring so many of the values that many of us hold true no matter how we identify politically or religiously.”

Indeed, JCT prides itself on igniting groundbreaking progress in the education of religious women in technology fields, particularly in computer science. One out of every five Israeli women studying computers does so at JCT, and all of those students are Dati Leumi (national religious) or Haredi. Fifty-three percent of JCT’s computer science students are women—18 percent higher than any other Israeli institution of higher learning.

Meanwhile, Bialik’s life story brings to mind that of Dr. Rozalie Schachter, the namesake of a JCT scholarship for students at the Tal Campus for Women. The daughter of Satmar Chassidim, who immigrated to the U.S. from Romania at age 16, Schachter obtained a Ph.D. in Physics from New York University (NYU) and became a trailblazer for women in the fields of technology and business. She served as vice president of strategic initiatives at Herley Industries and vice president of business development at General Microwave Corporation, among other senior roles.

When Schachter settled in Brooklyn upon moving to America, she studied at the Beis Yaakov school for girls in Borough Park and became interested in the fields of science and math. When she finished high school, the Satmar Rebbe gave her a blessing to attend college in order to follow her dreams in physics and the sciences. In the 1960s, her completion of a Ph.D. in solid-state physics at NYU was considered an anomaly not only for an Orthodox Jewish woman with children, but for all American women at the time. Today, JCT’s Rozalie Schachter Scholarship provides a $3,000 scholarship towards tuition fees to a different Tal Campus every year through 2028.

JCT’s new Tal Campus — whose construction made tremendous strides this past year despite the potential obstacle of the COVID-19 pandemic — is on track to break ground in early 2022. Moving forward, the campus promises to produce many more pioneers like Bialik and Shachter. As the permanent home for up to 3,000 of JCT’s female students in nursing, computer science, electro-optics, industrial engineering, accounting, and management, the campus will provide increased opportunities for national religious, Haredi, and Ethiopian women to pursue higher education and attain quality employment in scientific and high-tech industries.

The Tal Campus, and all of JCT’s initiatives intended to promote academic and professional advancement for religious women, are sending the message that women should not be limited by stereotypes and self-fulfilling prophecies. And that is exactly what I will have in mind when I hear Mayim Bialk say “What is…” on Jeopardy!