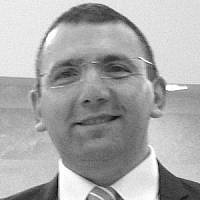 The Blogs
Arye Gut
Apply for a Blog
Advertisement
Please note that the posts on The Blogs are contributed by third parties. The opinions, facts and any media content in them are presented solely by the authors, and neither The Times of Israel nor its partners assume any responsibility for them. Please contact us in case of abuse. In case of abuse,
Report this post.

If one wonders how the Muslim-majority country of Azerbaijan came to such a rich alliance with Israel, one need look no further than the Red Village, a tiny river enclave in the mountainous region of Guba. There, a Jewish community has thrived amid a Muslim population for centuries. On July 21, 2015, I had the honor to take part in the International Summer School organized by the Baku International Center of Multiculturalism (BISM), Baku Slavic University, and the Knowledge Foundation of the President of the Azerbaijan Republic. During this summer school, I was a moderator at the round table entitled “Genocide against Azerbaijanis and the Karabakh War” where I lectured before foreign students from Russia, Bulgaria, Slovenia, Georgia, Italy and other European nations. I shared detailed information with the participants about the bloody events of March 1918 and the atrocities against Azerbaijanis committed in Baku, Shamakhi, Guba, Karabakh, Zangezur, Nakhchivan, and Lankaran. I also focused on real causes of the Azerbaijani-Armenian conflict and the massacre committed by Armenians in Khojaly in February 1992.

The crimes committed by Armenians are etched in the minds of the Azerbaijani people. Thousands of Azerbaijani civilians were killed only for being Azerbaijanis. Armenians destroyed homes and burned people alive as well as destroyed national architectural sites, schools, hospitals, mosques and monuments. The majority of Baku was turned into ruins. These brutal attacks qualify as a massacre, since mass killings were committed not just by some thugs, but by the communist leadership of Azerbaijan, led by Stepan Shaumyan.

The ancient town of Krasnaya Sloboda (Guba) in northern Azerbaijan, said to be the only all-Jewish town outside of Israel, is the pride of Azerbaijan. In this region, Jewish and Muslim Azerbaijanis have lived harmoniously for centuries. Muslims and Jews are linked by many things…history, citizenship, friendship, experience, but also by the tragic events of 1918-1919 when the Armenian Revolutionary Party, an Armenian nationalist and socialist group also called Dashnak, massacred thousands of Jewish and Muslim Azerbaijanis.

Fast forward to the waning years of the Soviet Union and in 1988, the Armenians, once again, began to demonstrate animosity towards Azerbaijan. The murder of two Azerbaijanis in Karabakh and the felling of Topkhana forest fueled the conflict, which then grew into an armed confrontation. We must also not forget the massacre committed by Armenians in the town of Khojaly in February 1992. In the course of this crime against humanity, the Armenian armed forces and mercenary troops killed almost all the residents of Khojaly, who could not leave the city and its surroundings. The reason for the mass annihilation of Khojaly civilians was simply that they were Azerbaijanis. Today, people occupying high posts in Armenia — Seyran Ohanyan, Serzh Sargsyan and Robert Kocharyan and others — should be brought before an international court as perpetrators of genocide. The crime must not go unpunished, as impunity, history has shown us, gives rise to new crimes.

Despite Armenia’s ethnic cleansing and aggression towards Azerbaijan, which includes occupation of 20 percent of its territories and one million refugees and Internally Displaced People, Azerbaijan is a true model of inter-civilizational and interfaith dialogue. Tolerance and multiculturalism are key foundations of the Azerbaijani society. Azerbaijan has made a concerted effort to create and foster the necessary political and social conditions for developing and strengthening the country’s traditions of multiculturalism and tolerance. Time and again, Azerbaijan has demonstrated that harmony is possible, and issues can be resolved without resorting to violence or strife. Over the centuries, various religions and cultures have lived peacefully together in Azerbaijan. Azerbaijan today continues to emit an incredible commitment to religious tolerance.

A striking example of Azerbaijani tolerance is a warm and brotherly attitude to the Jewish community of the country. Today about 5,000 Jews have settled in the Red Village, which boasts three schools and three synagogues. The Hebrew language, the artifacts of the Jewish faith, and the rich tapestry of Azerbaijani woven carpets all blend together in a lasting tribute to the cultural tolerance this country has achieved.  Legend has it that Jewish settlers first reached the Guba region in the 13th century, but the cementing of two cultures really took root in 1742, when the leaders of Guba, Huseynali Khan and his son Feteli, gave their blessing to Jewish settlers to form a permanent community. The Khans offered their protection to the village, vowing that any attack seen from across the river would summon an army of protection. That bond of trust has grown over the centuries, and today has translated into a larger diplomatic alliance between Azerbaijan and Israel. Israel opened the door in late 1991, with one of the first declarations in the world recognizing Azerbaijan as an independent country after the fall of the Soviet Union.

The State of Israel has repeatedly expressed its appreciation for Azerbaijan’s warm and unique attitude of President Ilham Aliyev, as well as the rest of the leadership of Azerbaijan towards the Jewish community. Diplomatic and economic ties grew rapidly over the years, as both countries shared a deep concern about Iran’s efforts to export Islamist extremism and develop nuclear weapons. Israeli Prime Minister Benjamin Netanyahu made the first official state visit to Baku in 1997 as a sign of the strengthening relations between the two countries. Commerce and trade flourished, with Israel becoming a major importer of Azerbaijan oil and Israel’s technology industry aiding Baku with such projects as telecommunications infrastructure. However, the relationships between Israel and Azerbaijan, and Muslim Azerbaijanis and Azerbaijani Jews, cannot be explained away by simple mutual self-interest. Common values and a shared history permeate the modern relationship. Both countries are enriched by the human connections between them and a determination to live in diverse and religiously tolerant societies.

Arye Gut is an Azerbaijan-born and Israel-based political scientist and foreign affairs commentator.

About the Author
Arye Gut is a noted expert on the former Soviet Union and the Middle East and the head of the Israeli NGO, International Society Projects.
Related Topics
Related Posts
Comments