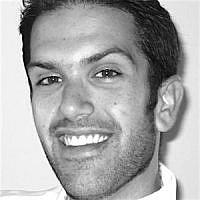 The Blogs
Daniel Wolnerman
Apply for a Blog
Advertisement
Please note that the posts on The Blogs are contributed by third parties. The opinions, facts and any media content in them are presented solely by the authors, and neither The Times of Israel nor its partners assume any responsibility for them. Please contact us in case of abuse. In case of abuse,
Report this post.

The words “never again” are more a statement of hope than an achievable reality, or so it seems.  We have been saying “never again” for years while at the same time genocide, human trafficking, and slavery have been taking place throughout the world.  We have been remembering, commemorating, and memorializing the Holocaust for seventy years yet those who deny the Holocaust — including heads-of-state, politicians, and academics — are spreading their vile lies with more force and effectiveness than ever before.  And it seems as though things are only going to get worse.

Many spent time last Wednesday embracing International Holocaust Remembrance Day and acknowledging the liberation of Auschwitz-Birkenau — the largest Nazi concentration and death camp. However, Iran’s Ayatolla Khamenei spent last Wednesday publicly denying the Holocaust and spreading lies regarding the history of the Jews and Israel.  This is nothing new.  Academics who deny the Holocaust denial are on the rise, and new forms of Holocaust denial are emerging.  Author and historian Dr. Deborah Lipstadt refers to “soft core” Holocaust denial which does not deny the facts but that rather draws utterly false comparisons between the Holocaust and the current Arab-Israeli conflict.  This is expressed through claims that there is a genocide of the Palestinians taking place at the hands of the Israelis who are often characterized as Nazis.

And it is not only the academics and world leaders who deny the Holocaust.  People you probably interact with every day question whether the Holocaust took place and to what extent the Jews were involved — as either the victims or the instigators.  Social media is my proof (warning: explicit language). If you really want to be scared and understand the extent of Holocaust denial see what the Anti-Defamation League has to say.

We will soon be living in a world with no more Holocaust survivors.  Three weeks ago we buried my grandmother, the last remaining female Holocaust survivor living in Iowa.  When she left this world we also lost her voice and her first-hand testimony to the horror and atrocities she, the Jewish people, and countless others experienced in the concentration camps.  My grandmother told her stories often.  She would speak in schools delivering her message about the depths of the human-created hell she experienced simply because she was a Jew.

She spoke of the miracles too — how she was once caught stealing bread and the Nazi spared her life and told her [sic] “if you have the audacity to steal from a Nazi, you will make it through this.” Typically, the response would not have been so generous, and probably would have resulted in a torturous, brutal death.  She spoke about entering the camps coming from a happy, well-off family with many siblings including a twin sister, yet she emerged an orphan, sick and emaciated, having lost her teeth and most of her ability to hear.  She would tell people that it was real, and that we must never forget what happened.

As I child I remember thinking that it sounded silly — how could anyone forget?  After all, this was history!  We all have textbooks that teach us about history, and if it’s in the books, how could we ever forget?  But I have grown up and now realize we are living in a world where truth seems fluid, where history is debatable, and where the historical reality of the Holocaust is in question.

Failing to remember history, or failing to remember history accurately, will be the downfall of Western civilization.  George Orwell wrote “the most effective way to destroy people is to deny and obliterate their own understanding of their history.”  The world needs to appreciate that this is not only a Jewish issue — it is a global issue!  The world leaders who deny the Holocaust, including Palestinian Authority leader Mahmoud Abbas, Iranian president Hassan Rouhani, and Khaled Mashal, current leader of Hamas, are the same people waging a war on Western civilization.  They aspire to change the world – to rid it of Western influence and culture.  They want a world in which Jews are pushed into the sea, those who identify as LGBT are shot in the street, and the families of those who kill the infidel are rewarded abundantly.  And it starts with a denial or distortion of history.

Elie Wiesel, the professor-philosopher-author Noble Laureate, often writes and speaks about the need to bear witness, to solidify a historical reality by listening to the stories of those who were there and passing those stories to the next generation.  He explains that although we would think that the memories would get diluted and lose their effectiveness over time as they became second-hand, third-hand, and fourth-hand accounts of what transpired, in reality hearing from one who was there puts you there and makes you a witness, and then you are able to bear witness to the subsequent generations putting them there as well.  This is the only way for the memory and historical reality to live on.

Let us not be so naïve as to think that pictures and video footage will suffice.  Those who deny the Holocaust are ready to respond to media-based claims.  Photos can be forged using computer software.  Videos can make paid actors look like Holocaust victims — after all, the movie Schindler’s List looked pretty real.  Those who deny the Holocaust claim all the media are forgeries.  The only compelling argument we will have to make is that we were there, that we witnessed it and experienced it.  And if we were not there personally, we listened to the stories of those who were there.  We embrace those stories and pass them on to our children, and implore them to pass them on to theirs, in an unbroken chain from generation to generation reaching back to those who were there, who experienced it, and lived and died through it.

There will never be a debate about who was the first president of the United States.  We all know it was George Washington because that is a historical reality that has been passed down from generation to generation from the time it took place until today.  We need to ensure the unbroken chain of transmission regarding the Holocaust stays strong.  We do this by speaking about it and teaching about it.  We teach our children – and every child – about what happened.  My grandfather’s story is being taught to children in the form of a new book that was written by a child who was interested in the Holocaust and wanted to teach other children about it.  You can also take four minutes and eight-teen seconds to hear his story here.

It is not simply the memory of six million Jews that is on the line.  It is not simply the memory of millions of others who were decimated in the wake of the Nazi Holocaust.  Western civilization and the world as we know it hangs in the balance.  A war of ideology is being waged.  Its battlefronts include New York, Paris, Tel Aviv, and countless other cities where those who want to see the world run according to their religious worldview are spilling blood in order to accomplish their sometimes messianic, sometimes apocalyptic dreams of a world without Israel, the United States, and Western civilization as a whole.  This goes hand-in-hand with Holocaust denial.  Those who control the past control the future.  The very same who want to eliminate the Holocaust from the past want to eliminate Western civilization from the future.

About the Author
Rabbi Daniel Wolnerman is a speaker, thinker, and writer who runs Jewish programs for university students and young professionals while working for Aish Toronto. He has previously served as the Hillel rabbi at the University of Florida and University of Miami. He received is rabbinic ordination from Aish HaTorah and the Chief Justice of the Rabbinical High Court in Jerusalem.
Related Topics
Related Posts
Comments