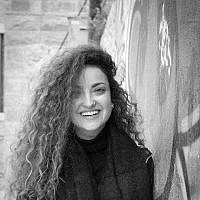 The Blogs
Ayelet Goldfarb
Apply for a Blog
Please note that the posts on The Blogs are contributed by third parties. The opinions, facts and any media content in them are presented solely by the authors, and neither The Times of Israel nor its partners assume any responsibility for them. Please contact us in case of abuse. In case of abuse,
Report this post.

Neither the environment nor natural resources recognize political borders of any kind.

For years, public discussions regarding Israel have been about one major topic: security. This issue is between Israel and her immediate neighbors: The West Bank, Judea and Samaria, (or whatever you want to call that controversial piece of land), and the Gaza strip. But, somehow, no one has bothered to address environmental issues between us. Now is the time!

Air, land, and soil do not comprehend the concept of borders. They don’t know about the Green Line or any other color they used that day to mark the barrier. If the citizens of Israel are polluting in Tel Aviv, Hebron will suffer from poor air quality. And if the PLO burns garbage In Ramallah, there will be a hazardous odor in Kfar Saba.

One of the biggest concerns today according to a report from the State Comptroller from 2017 is water. There is severe water pollution in the rivers and streams between the State of Israel and the territories of Judea, Samaria and the Gaza Strip. This is the environmental threat that crosses the green line and is the most severe one facing the State of Israel. It is a threat to all groundwater reserves, public health, and quality of life. Due to the geopolitical situation in the territories of Judea and Samaria and the Gaza Strip, this issue also affects Israel’s security and the world’s opinion of Israel. All this is beside the fact that environmental issues only escalate if we don’t take care of them for us and more importantly, for future generations.

Most sewage in Judea and Samaria, both domestic and industrial, does not go through proper treatment. This treatment includes removal of pollutants and it is discharged into the streams mentioned above or into septic tanks. The pollution of the rivers is problematic because of three main aspects: A. There is a reduction in the amount of available water for use by the population living in the area. B. Public health concerns and quality of life due to sanitation hazards and environmental nuisance. C. Damage to the ecosystem.

As of today, the Israeli government has yet to create an environmental management policy regarding cross-border hazards between Israel and the Gaza strip, and the West Bank. Moreover, the government has yet to appoint a specific person/office that will create a long-term plan with an overall vision regarding the environmental concerns in this area. Without doing so and neglecting this issue for so many years can lead to a viable threat to public health, safety, and important political interests for Israel.

People often don’t have access to fresh water in the Gaza strip. An Israeli start-up, invented a machine that creates water out of air and donated it to the Gaza strip. ”Gen M” is the name of the machine and it can create up to 800 liters of water daily.  Even with all the fundamental differences between Israel and the Gaza strip, this machine is used daily. In order to produce 1 liter of clean drinking water, the machine uses as little as 0.3 KWH. This way neither Israel nor Egypt (depending on the day) needs to pay high prices for electricity. Another benefit is that less electricity equals less pollution.

I would like to suggest another solution: solar panels. This area we are located in is blessed with plenty of sunshine. More days out of the year are sunny rather than cloudy. I propose placing solar panels in the area between Israel and its border with Gaza. This way, the electricity that Gaza uses is 100% renewable, which means it does not pollute but more so, the electricity is not dependent on Israel or Egypt. This way the people of Gaza will be self-reliant and have electricity 24|7, a human right in the 21st century.

As we can see there are, in fact, solutions to environmental problems between Israel and our neighbors. These positive, life-affirming changes can come from the government or from the business sector, but they must come from somewhere. We don’t have the privilege of discarding environmental issues, especially in the Geo-political environment we find ourselves in today. Maybe if there will be enough public concern this will change. Act now. Voice your concern on the issue and then just, maybe, things will change for the better.

About the Author
My name is Ayelet Goldfarb.I am 24. Originally from Jerusalem, and today I live in Herzliya. I study government and sustainability at IDC. In the army I oversaw education in the border police unit. After that, I was a commander in the education unit. I work as a group manager of students training them in the field of Israel advocacy.
Related Topics
Related Posts
Comments