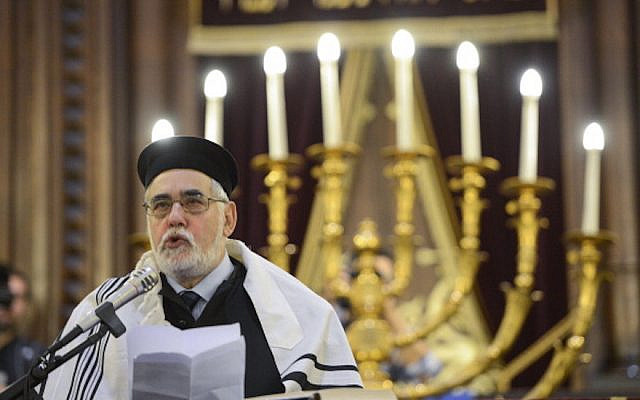 Before World War II, a mixed choir accompanied services in the Great Synagogue of Brussels on Rue de la Régence, Brussels’ main artery leading to the Royal Palace. Designed in 1875 in Romanesque-Byzantine style, the soaring edifice is a testament to the economic, political, and social success of Belgian Jewry – and their progressive brand of Judaism.

Today, the synagogue is called the Great Synagogue of Europe in honor of its role in the capital of the European Union. Yet there is no longer a mixed choir and the synagogue follows the Orthodox tradition of separating women from men and forbidding women to read from the Torah. Belgium’s Progressive Jews have been forced to build their own new synagogue on the outskirts of town. The Jewish Central Consistory of Belgium, which regulates the relation of Belgian Jews to the Belgian state, refuses to recognize Progressive Jews as authentic Jews.

Major Jewish organizations believe this discrimination should not stand. Last week, 10 organizations endorsed a demand that the European Commission “ensures that Jewish Europeans who adhere to representative denominations, which enjoy a historic past and legitimacy, do not suffer discriminatory effects in terms of recognition, security or funding”.

The endorsement came as part of a joint series of recommendations to the European Commission ahead of a meeting of a working group tasked with producing the first-ever EU Strategy on combating antisemitism and fostering Jewish life. This working group is made up of The American Jewish Committee Transatlantic Institute, B’nai B’rith Europe, B’nai B’rith International, The European Association for the Preservation and Promotion of Jewish Culture and Heritage, the European Jewish Congress, the European Union of Jewish Students, CEJI: A Jewish Contribution to Europe, the World Jewish Congress, and the European Union of Progressive Judaism, of which I am a director.

Click here to read the document explaining these recommendations.

Presently, many governments in Europe fail to respect this principle. They concentrate power and funding on a single denomination, or even worse, favor one group that supports its politics, even though Progressive Judaism was a recognized, established branch of European Judaism before the Shoah.

Progressive Judaism, known as Progressive, Liberal, or Reform Judaism depending on the country, is a European development, a response to the Enlightenment and 19th-century Emancipation. Progressive Jews believe in adapting Jewish teachings to the modern world. Music is welcome at services. Gender equality prevails. Gay and Lesbian Jews are welcomed. Many women and homosexuals serve as rabbis in Progressive Jewish communities.

After World War II, only small Jewish communities survived the Shoah. In the United States, Reform Jews remained in the majority. In the U.K., Reform and Liberal Judaism remained well established. On the continent, most Jews felt they could not afford to split. Orthodox Judaism became the religious standard. The Jewish Central Consistory in Belgium and the Jewish Central Committee in Germany received all state funding and restitution. The Orthodox took over Progressive, Reform, and Liberal synagogues.

In recent decades, Progressive, Reform, and Liberal synagogues have grown and are now established in 17 European countries. In Germany, after a more-than-a-decade-long battle, Progressive communities now receive state financial support, although they still don’t get access to their fair share of any remaining pre-war Jewish infrastructure, including cemeteries. In Belgium, one Francophone Progressive synagogue has been recognized by the state, but not by the Consistory. An English-speaking community receives no recognition.

This principle of non-discrimination is important not just for Progressive Jews, but for the future of all European Jewry. If governments are allowed to pick and choose the Jews they like and dislike, then we will end up being manipulated. In Hungary, a single group – Chabad – receives the vast majority of state funding because it supports the government’s right-wing politics. This is not in the interest of the vast majority of Hungarian Jews and it is unacceptable to the European Union.

Progressive Judaism needs to be treated equally to ensure the future of European Jewry. If Europe’s Jews stay sectarian and restrictive, we will shut ourselves off to the wider European world. Jews and Judaism should not have to choose between secularism and a religious option that treats women as second-class citizens and closes doors to gay and lesbian Jews. The image of black-hatted Haredi should not be the only image of Judaism that most Europeans see. Progressive Jews offer a legitimate spiritual alternative, one rooted in European traditions and history.

The European Commission plans to publish its first-ever official manifesto on how European governments should protect Jews and promote Judaism by the end of 2021. In a recent speech, Commission president, Ursula von der Leyen, declared herself “deeply concerned about the recent escalation of violence on Europe’s streets”. She pledged that “all European students should learn about the Holocaust – no matter their background, family history, or country of origin” and “to foster Jewish life in Europe in all its diversity”. She asked for input from European Jewish representatives.

Over the past few weeks, the European Union for Progressive Judaism (EUPJ) has worked with the aforementioned Jewish groups to publish a full list of proposals. They range from providing heightened security and victim support to safeguarding the memory of the Holocaust against distortion and strengthening the existing legal framework to protect essential Jewish practices such as religious slaughter and male circumcision.

A pledge to respect Jewish diversity would help ensure a healthy future for European Jewry.