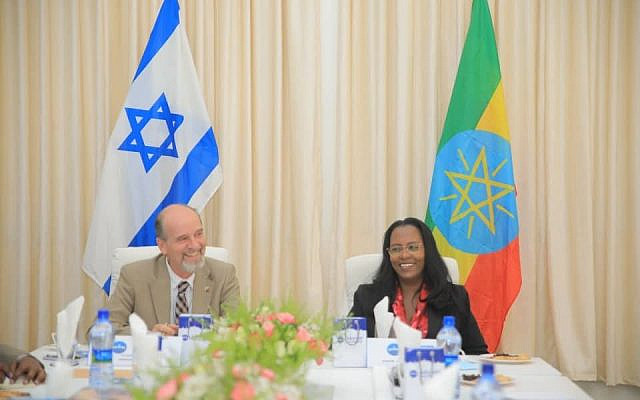 Ambassador Raphael Morav did not plan to move to Israel, his parents brought him there when he was still in primary school. He did not plan to become a diplomat, he simply saw a listing for jobs, took a test, and got in. He never planned on becoming the Ambassador of Israel to Ethiopia, but that is the position that opened up at the time and he applied. Lastly, Ambassador Morav never planned on completely changing Ethiopian Jewish life, Israel’s recognition of Jews or perceptions of Jews in Addis Ababa. But that is what he did, with calm and persistence and his usual calm but kind demeanor.

Ambassador Morav, whether in pictures or on the phone, exudes kindness and humility. There is an aloofness about him and his effect. You can tell he does not make a big deal about his role or accomplishments or the changes that he set forth, but that is why he is able to create the change. No one feels an ego or a push or duplicity from him. He acts in accordance with his values, he acts on behalf of Israel and he does not seem to judge the country where his post is not to dictate his thoughts, but to represent the nation he comes from.

Ethiopia is grappling with democracy. Democracy is new there, the current administration is headed by a Nobel Prize-winning president, and as usual, the Nobel Pease Prize seem to often go to those who end up waging war in the near future. The Tigray region is mired in bloodshed, sparked by rumors on social networks that now involves three countries with tens of thousands of refugees. Yet the nation is also headed for elections, elections where every voice can make a difference. And so, for the first time, Jewish voices in Ethiopia matter.

The prior administration had a precarious relationship with Jewish community, just as all administrations before that. Vilification of the Jewish community was common in the society in general and the community felt invisible and unprotected. It is possible that it was this change in governance three years ago that may have allowed the Ambassador to make inroads in the treatment of Jewish community. It was also pure chance that at the same time that he arrived in Ethiopia, an applied Anthropologist, Dr. Malka Shabtay began to work with the Jewish community in Kechene, the Jewish suburb of Addis Ababa. Dr. Shabtay ended up being called the Moses of the Kechene Jews by Kechene Jews after connecting them to the Ambassador and making their conditions known in United States and Israel.

Jewish people of Addis Ababa have lived near the capital for over a hundred years. They were brought there from the north, previous capital Gondar. Jews were known for their skills in weaving, pottery and blacksmithing. At the time, they were needed for the building of the new capital of Abyssinia. One condition was that they could not practice Judaism. These Jews became crypto-Jews, setting up secret monasteries throughout the remote mountains near the town Debre Berhan, Amhara region, (80 miles north of Addis Ababa) in the district called Simien Shewa.

In the 1970ies and 1980ies, when communist rule caused mass-famines in the north, these Jews could not pick-up and walk across a desert to be saved during operation Solomon, and in fact, Israel did not know of them because they continued to be hidden. Being hidden allowed them to survive but it also caused them much hardship. They were relegated to living in mud huts while homes of glass and concrete began to rise in the capital. They were forced to sell their crafts to middlemen who could sell them for ten times the price because of pernicious blood-libel rumors which said that looking a Jew in the eye could cause a person to get sick and die.

So while Ethiopian Jewish communities in Israel slowly got used to Israel life and began to thrive, this community continued to fight oppression and poverty. Until a little over ten years ago, when young Jews using internet learned of Jewish communities abroad and of Ethiopian Jews in Israel. These proud Jews made contact with the outside world. So in spite of the non-stop antisemitism and fear from within the community about retribution in schools and work-places, they managed to create Jewish organizations like Ethiopian North Shewa Zionist Organization and Lovers of Zion Association in addition to an official synagogue. Thus they created a community of Jews who were able to speak out and wear their Judaism proudly. 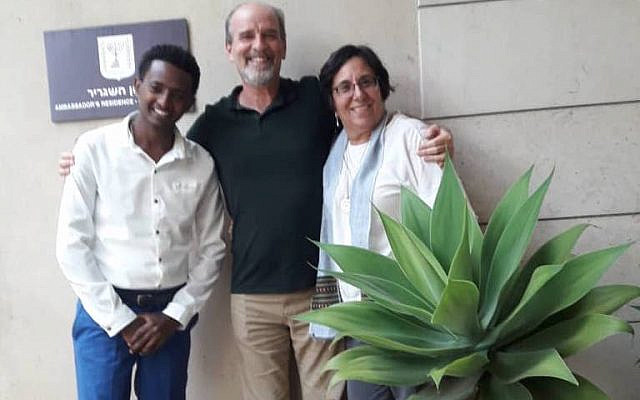 The support of Israel is like the invisible hand of markets, it works even when you don’t see it, you also know when it is not there. The signal that these Jews are seen by Israel was heard loud and clear. Soon, the leaders of the Jewish community, Belayneh Tezbuku and Michael Moges were interviewed on local television, cameras recorded the weavers and pottery women, they received recognition for fighting COVID, and ultimately their need for a cemetery to ensure dignified burial and ability to practice openly, a school to help children move into the modern world, and a community center to allow the community to come together and support each other. But the Ambassador didn’t stop there, he wanted something more for the Jewish community of Ethiopia than just feeling like they mattered and belonged, he wanted for Ethiopia to understand the Jewish story. For this reason, he negotiated a Holocaust Memorial, a statue of Anne Frank, to be erected in the center of the capital. One completed, it would be one of the only Holocaust Memorials on the African Continent besides South Africa.

It is hard to tell who is Moses and who Aaron is in this story. An allegory rarely fits exactly. Like Moses, he arrived when the Jews had been in bondage for a long time, he with his trusted Aaron by the name of Dr. Shabtay walked the desert, and when they got to Israel, the time of his post came to an end. Unlike Moses, Ambassador Morav did not leave the Jews. Like Aaron, Ambassador Morav was able to speak for the Jews to the politicians in Ethiopia. When the Mayor of Addis Ababa asked him who will see these projects through to the end once you leave?

“I will.” said Ambassador. He may be leaving the post, but he is not abandoning the Jews or the cause. The fact that these projects are a priority was confirmed by the office of the Mayor, who said “It is our main priority to realize all three of them in short period of time.” Thus they intend to set the path for the projects to occur even as she fights for re-election. 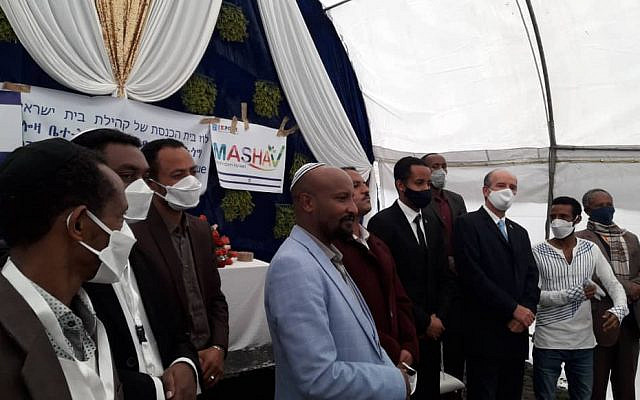 Ambassador Morav with Brit Olam including Belayneh Tazebku and Michael Moges at the opening of the new Synagogue in Kechene.

Jews of Egypt may not have known the importance of Moses at the time of their passage. They were angry at him, ignored him, and some resented him. With time, they realized how much they owe to the humble man. The Jews of Ethiopia on the other hand recognize the importance of the Ambassador’s actions. In a thank-you statement, the chazan of the community, Michael Moges said “No words can express what you have done for us and for our community. You have changed the lives of many people in our community, you are a true manifestation of HaShem Blessing to North Shewa Bete-Israel community. You are a Gift from the the Creator to us, and your work will continue to make changes in the community coming days. May the G-D of our forefathers bless you as he blessed our Patriarchs Abraham, Yesehak, and Jacob, you, your wife, your family and your descendants.”

Few Jews around the world on the other hand in the English-speaking Jewish media will ever know about the profound change that occurred for the 60,000 to 100,000 Jews who live in the Simien Shewa region. They will not know of the effect of one man and one woman on the future of millions of Jewish descendants of the Ethiopian Jews in Addis Ababa today. They will not know of how much their lives will change and how that change will occur, but our ancestors will.

So is it so unlikely that Ambassador Morav will join the ranks of Queen Esther and Mordechai, or of Ezra the scribe? The ranks of regular seeming people, who took on a great difficulty without thought of its hardship or consequence, and simply did the right thing of making a dream of a better future a reality.

Photographs provided by Brit Olam community, Dr. Malka Shabtay and office of the Mayor of Addis-Ababa.