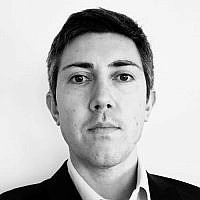 The Blogs
Daniel Roth
Apply for a Blog
Advertisement
Please note that the posts on The Blogs are contributed by third parties. The opinions, facts and any media content in them are presented solely by the authors, and neither The Times of Israel nor its partners assume any responsibility for them. Please contact us in case of abuse. In case of abuse,
Report this post.

This week the EU sanctioned the two main entities responsible for drone production in Iran.  Yet for over four months, the EU sat on its hands as Russia accumulated in plain sight a stockpile of Iranian drones to launch at Ukraine. Only after four Ukrainian civilians were killed by Shahed-136 drones did the EU react. The monomaniacal pursuit of American reentry into the Iran nuclear deal (JCPOA) has cost Ukrainian lives and will cost more if a new course is not charted.

The likelihood of Russian acquisition of Iranian arms was so pronounced that on July 11, U.S. National Security Adviser Jake Sullivan publicly warned that Iran was preparing to deliver Russia hundreds of drones “including weapons-capable UAVs on an expedited timeline”. Iran had demonstrated its Shahed-101 and Shahed-129 UAV drones to Russia in Iran back in June, both “capable of carrying precision-guided missiles.” These drones were explicitly identified as loitering munitions, also known as suicide drones.

The EU’s Foreign Affairs chief Josep Borrell wholly ignored this alarming development, and instead proclaimed on July 26, “Now is the time to save the JCPOA.”

A month later, the U.S. State Department reported that Iran had hosted training sessions for Russian drone operators as part of a bilateral weapons transfer pact. On August 16, it was Russia’s turn to host, as it kicked off a multi-week “drones tournament” along with Iran, Belarus and, Armenia, with more than 70 soldiers participating. Subsequent air traffic data documented dozens of flights from Iran to Russia using sanctioned Iranian airlines linked to the terrorist Islamic Revolutionary Guard Corps (IRGC). From April to August, more than 40 IRGC-linked flights were recorded landing in Moscow, compared to just three in the whole of 2021.

Over the same period that it prepared to arm Russians to kill Ukrainians, Iran was found to be targeting Americans and Europeans for assassination, an EU-member state came under an Iranian cyber-attack that nearly triggered NATO’s Article V collective defense apparatus, and 27 IAEA monitoring cameras were switched off to blind inspectors to Iran’s nuclear activities. By contrast, EU leaders stuck to their script and Borrell’s focus was, naturally, on “fine-tuning” his own version of the JCPOA. He believed he was close on August 8, noting just “a handful of issues” outstanding for a “final text.” Of course, he was wrong.

Finally, fatally, and inevitably, on October 17, a wave of the latest delta-wing Shahed-series (136) drones were launched against Kyiv and other cities by Russian forces. More will follow, as Iran has already agreed to send more drones plus missiles capable of reaching up to 435 miles.

All this time, as Iran tested how far it can go without consequence – from initial talks to training camps, competitions, airborne transfers and actual deployment – the EU’s foreign policy point man said nothing, did nothing. The EU’s obsession with a bad, rapidly decaying deal explains so much of its foot-dragging on every important Iran challenge. Even today, nothing has changed the overriding devotion to the deal at the top in Brussels, as Borrell clarified in his comments on November 4 after speaking with the Iranian Foreign Minister.

EU-3 member-states have correctly asserted that Iranian transfers to Russia breach U.N. Security Council Resolution 2231 (Annex B). Yet they remarkably fail to mention that the same provision expires in less than one year, falling under the very same Iran deal to which these countries remain so wedded. How will the EU respond if Iran continues to arm Russia next autumn and winter, which seems highly likely at this point? Given past performance, when the EU allowed the JCPOA’s Iranian arms embargo of October 2020 to expire without a squeak of dissent, the answer must surely be that it won’t.

With Iranian drones already in Russian hands and supply routes established, this week’s action is a case of shutting the stable door after the horse has bolted. But there are remedies available: Speak out, forcefully and promptly, against Iran’s malign activities; recognize that the overriding devotion to the JCPOA at the top in Brussels is being used against Europeans; isolate and embarrass Iran by recalling EU Ambassadors and expelling Iran’s; sanction the IRGC in its entirety and also Iranian oil and other critical sectors; and walk away from the Vienna talks to restore the JCPOA – Iran’s most powerful tool against accountability.