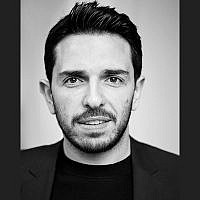 The Blogs
Dervis Hizarci
Apply for a Blog
Advertisement
Please note that the posts on The Blogs are contributed by third parties. The opinions, facts and any media content in them are presented solely by the authors, and neither The Times of Israel nor its partners assume any responsibility for them. Please contact us in case of abuse. In case of abuse,
Report this post. A supporter of the right-wing populist Alternative for Germany (AfD) party displays a placard showing crossed out Niqabs during a demonstration against the German government's asylum policy organized by the AfD party in Berlin on November 7, 2015. (AFP PHOTO / JOHN MACDOUGALL)

Four out of ten students in Germany do not know what Auschwitz was. At the same time, there are voices calling for a complete reversal of Germany’s decades-old culture of remembrance, for an end to financing memorials and important historic sites such as concentration camp education centres. These demands are being voiced all over the country – demands for a “clean break” with the past, for starting again on a “new page.”

This is the situation today in Germany, widely recognized for and taking pride in having learned from its history. A country where politicians across the political spectrum have repeatedly declared their commitment to remembering. Where “never again” is declared on every and any Memorial day and on countless official occasions.

However, at this moment in time, ideas are being promoted that run counter to the vision of Europe as a foundation of peace, a melting pot of democratic, cosmopolitan, liberal societies. A new narrative of nationalistic populism is gaining acceptance alleging that Democracy has “failed”. Perhaps the most tragic aspect of this development is that these forces are stirring in reaction to horrendous humanitarian catastrophes that are causing flight and displacement.

Migration flows have occurred throughout human history. We need to think about ways society can deal with migration, not ways to inhibit it. The tendency of “othering” groups is a massive obstacle in this effort. One hears today of the “Islamization of the Occident.” This loaded language not only obscures the cultural and religious diversity of today’s migrants; it also works against their successful integration into contemporary German society. When a group is stigmatized, marginalized, and scapegoated for societal problems, it may see no value in becoming part of mainstream society.

This can also foster acrimony and divisiveness between minority groups. A case in point is anti-Semitism. Without a doubt, anti-Semitism exists among Muslims, just as it exists also in other elements of society. But now, right-wing organizations and political parties are asserting that they are the “protectors of German Jewry” against this allegedly homogenous minority. The alt-Right has taken up the cause of anti-Semitism, but not because they have experienced an awakening to its dangers. Rather, it is a means of shifting all responsibility for anti-Semitism to the Muslim community. This is why it is important to shape discourse about anti-Semitism so that it does not feed the objectives of the far right.

Now more than ever it is important that minorities recognize themselves as one collective, one force that will be heard loud and clear. It is time to step away from the sidelines and focus on what connects us. Not only the commonalities found in the religious traditions of Islam and Judaism, both Abrahamic faiths that incorporate rituals such as circumcision and religious slaughter, but also, the powerful shared experience of discrimination, exclusion, and assault in the current climate.

Understanding this connection, appreciating our common experience while recognizing and acknowledging the singularity of our communities, can help avoid pointless confrontation amongst minorities, which is ultimately a zero-sum game. Only through mutual understanding and recognition can we harness the power of our collective voice.