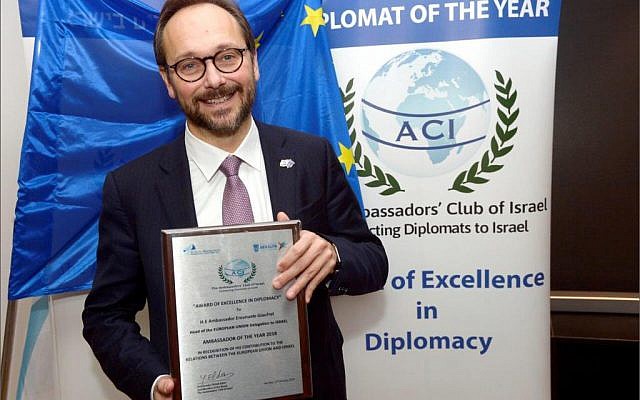 Yet none of that stopped the Tel Aviv-based Ambassadors’ Club of Israel last week from honoring Emanuele Giaufret, the EU’s envoy to Israel, with its coveted “2018 Diplomat of the Year” award.

The Jan. 17 ceremony, which took place at the Sailors Club in Herzliyya, attracted more than 100 people, including 30 ambassadors representing countries ranging from Guatemala to Kazakhstan to Zambia. Also in attendance: Deputy Foreign Minister Tzipi Hotolevy and Herzliyya Mayor Moshe Fadlon.

The festive event coincided with the Netanyahu government’s re-establishment of official ties with Chad — bringing to a record 160 the number of countries with which Israel now has diplomatic relations — and the expected visit to Israel next month of the prime minister of Mali, another predominantly Muslim African nation.

“Today, we shine a light on exceptional diplomats whose work serves an example to others,” Hotovely said. “Israel has become a rising power in recent years, and in foreign relations, we’ve enjoyed a period of great success. Today we stand in the forefront of diplomacy and innovation in cybersecurity, agrotech and medicine — and many countries today are learning from Israel.” 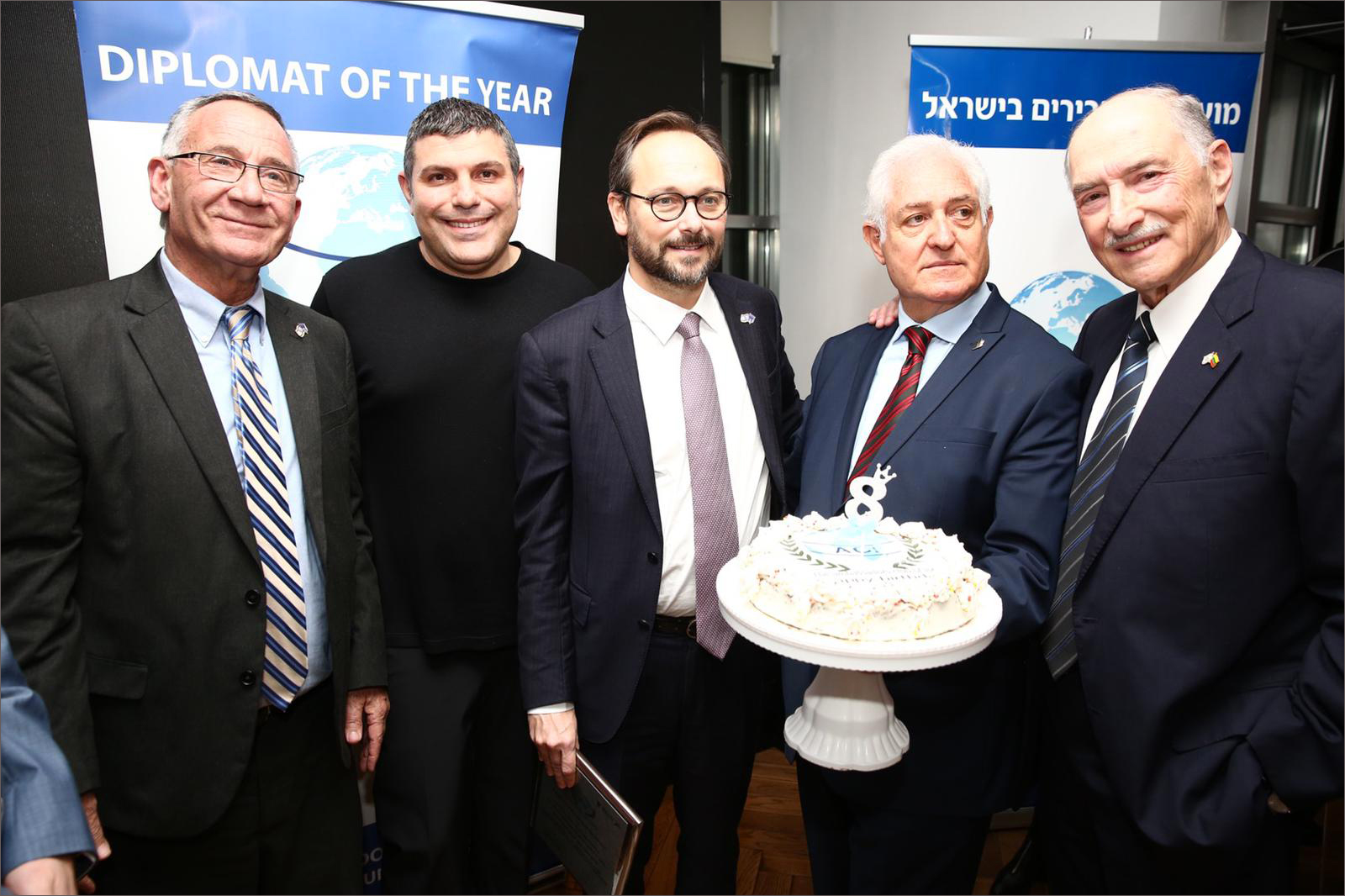 She added: “It’s not easy to be the EU’s representative here and still be a favorite. This is an achievement.” 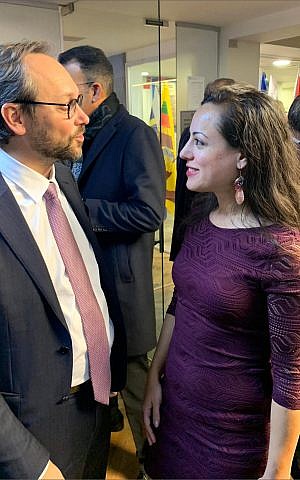 “The search for ambassador of the year wasn’t easy,” said Yitzhak Eldan, a former Israeli ambassador to Denmark, UNESCO and the Council of Europe who founded the Ambassadors’ Club in 2010 and has remained its president ever since.

“After consultations with many people, our board chose Emanuele Giaufret because he’s one of the most respected ambassadors in Israel’s diplomatic community. He travels around the country and meets its people, including high-school kids,” Eldan said. “He publishes articles and expresses public diplomacy at its best, contributing to the dialogue between Israel and the EU.”

Giaufret, whose mother tongue is Italian, is also fluent in French, English and Spanish. He has a PhD in history from the University of Florence, and a master’s degree in European affairs from the College of Europe in Belgium.

No stranger to Israel, he served at the EU Delegation in Tel Aviv years ago; one of his children was born at Ramat Gan’s Tel Hashomer Hospital.

If polls are any indication, Brussels faces a public-relations crisis in the Jewish state. 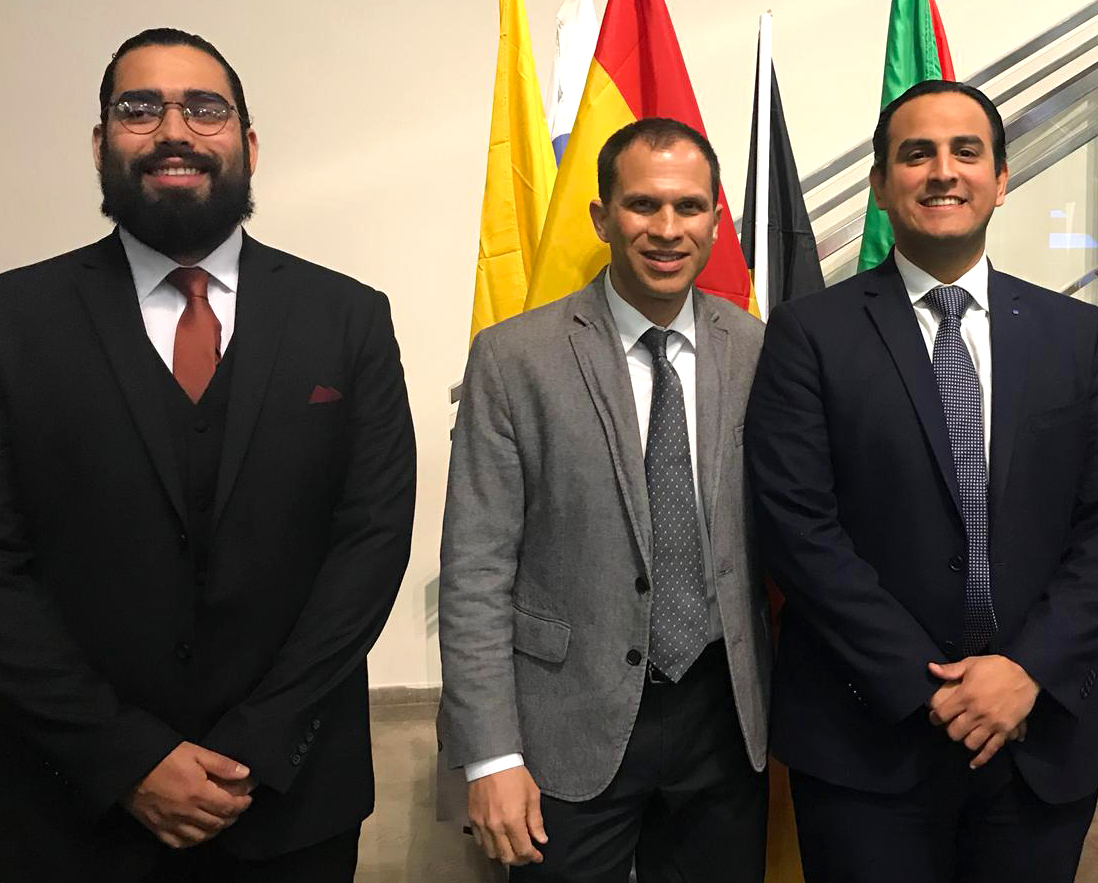 According to a recent survey, 55% of Israelis consider the 28-member EU “more of a foe,” while only 18% view it as “more of a friend” and 27% had no opinion on the matter. The poll was commissioned by the left-leaning Israeli Institute for Regional Foreign Policies (Mitvim); it also found that only 23% of respondents said Israel belongs more to Europe, while 28% consider Israel more part of the Middle East and 22% said it belongs to the Mediterranean Basin.

Even more concerning, only 17% of respondents said developing ties with Europe should be one of Israel’s top foreign policy priorities — way behind the Israeli-Palestinian conflict, developing ties with moderate Arab states, fighting boycotts of Israel, improving relations with Russia, and dealing with the Iranian nuclear threat.

Within the EU itself, 70% of Israelis say their country should develop closer ties with Great Britain, France and Germany; only 7% said the government should pursue improved relations with the Czech Republic, Hungary, Poland and Slovakia.

“Sometimes when I’m looking in desperation at the opinion polls rating the EU among the Israeli population, I scratch my head and am so glad some Israeli think I’m doing a good job,” Giaufret told his audience, only half-joking. “I’ve always felt that despite criticism of the EU, there’s always been a great interest in Europe and a desire to make this relationship right.” 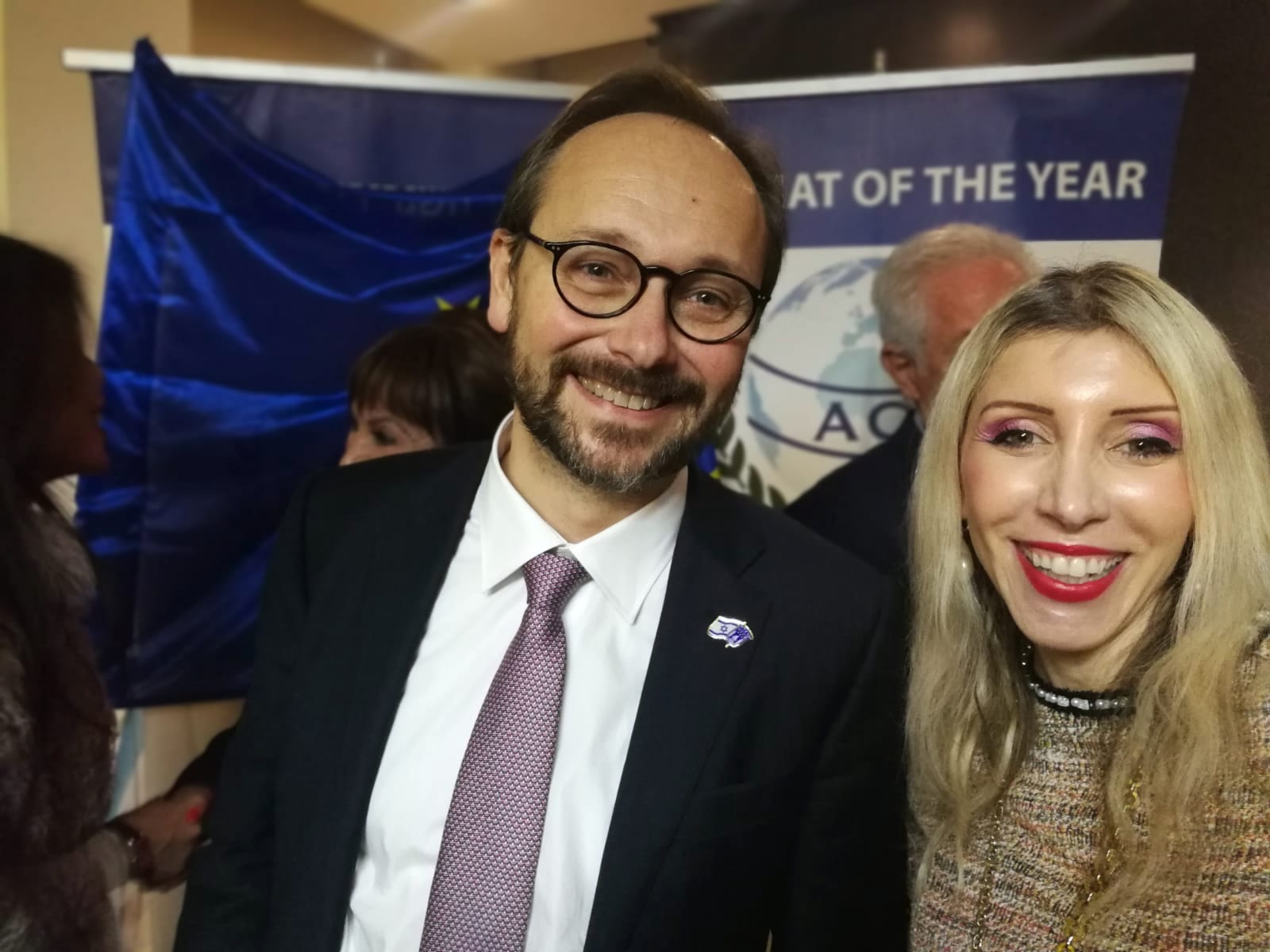 He added: “My assessment is that despite some differences that exist between Israel and the EU, they should not completely overshadow a relationship that’s grounded in history and common interests such as fighting terrorism and expanding trade relations.”

Uriel Lynn, head of the Federation of Israeli Chambers of Commerce, praised Giaufret for not being afraid to speak his mind.

“You set a very high standard for people to win this award. I would expect any ambassador to be friendly with all the people and institutions in Israel, yet at the same time completely independent in expressing his opinions and attitudes,” said Lynn. “Many times, we agree with the EU’s economic policies more than with the economic policies of our own government.”

Sagi, a billionaire who owns the gambling software company Playtech as well as London’s Camden Market, spoke after accepting the 2018 “Businessman of the Year” award.

“I truly believe good business strengthens diplomatic ties and fosters positive relations between human beings,” he said. “These days, I — like everyone else — hope there will be a solution for Brexit that benefits both parties, Britain and the EU. I think a creative solution can and must be found, the sooner the better.” 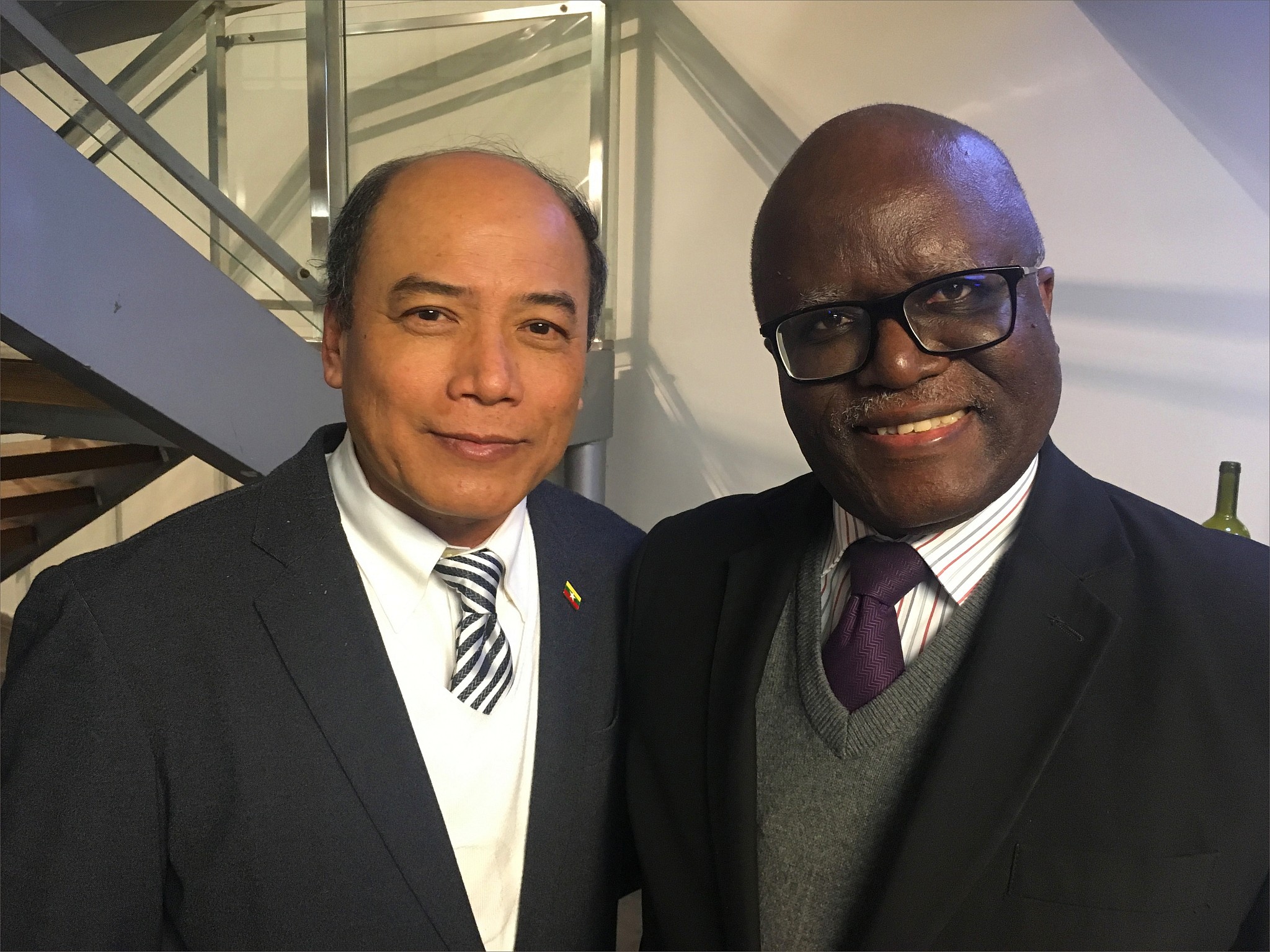 Following the awards ceremony, I asked Giaufret which policy differences between Israel and the EU concern him most.

“The security of Israel is important, though we have some disagreements. We fully agree with Israel that it’s essential to prevent Iran from obtaining nuclear weapons, but we think the JCPOA [Joint Comprehensive Plan of Action] is the way to do this,” he said, referring to the complex agreement reached by Iran, China, France, Germany, Russia, Britain and the United States. “Likewise, the issue of the Palestinians remains important. We hope to contribute to a solution, but this is something the parties have to do themselves.”

I also asked what impact, if any, Britain’s planned March 29 pullout from the EU is likely to have on Israel and the future of Israel-EU relations.

“It’s very difficult to see how Brexit will play out,” he replied. “We still don’t know the final outcome of this process. We hope the UK will come out with a proposal to address the issue. In terms of foreign policy and security, this is certainly an important issue for the EU. But it’s in the hands of the British people.”