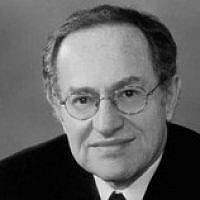 The Blogs
Alan M. Dershowitz
Apply for a Blog
Advertisement
Please note that the posts on The Blogs are contributed by third parties. The opinions, facts and any media content in them are presented solely by the authors, and neither The Times of Israel nor its partners assume any responsibility for them. Please contact us in case of abuse. In case of abuse,
Report this post.

Face it. Iran probably will get the bomb. It has already test fired rockets capable of targeting the entire Middle East and much of southern Europe. And it claims to have 40,000 suicide volunteers eager to deploy terrorism—even nuclear terrorism—against its enemies. With a nuclear capacity, the Islamic Republic of Iran will instantly achieve the status of superpower to which Iraq aspired.

Nothing currently on the table will deter Iran. Sanctions are paper protests to an oil-rich nation. Diplomacy has already failed because Russia and China are playing both sides. Sabotage, bribery—even assassination of nuclear scientists— may delay but will not prevent Iran from becoming a nuclear power. That leaves military threats and, ultimately, military action.

First, consider military threats. They are already coming from two sources: the US and Israel. Neither is working, for very different reasons.

The Iranians would probably give up their nuclear weapons program if their leaders truly believed that refusal to do so would produce an Iraq-like attack—an all-out invasion, regime change, and occupation. Leaders, even religious leaders, fear imprisonment and death. Only the United States is capable of mounting such a sustained attack.

But the continuing war in Iraq has made it impossible for the US to mount a credible threat, because American public opinion would not accept a second war—or so the Iranians believe. Moreover, America’s allies in the war against Iraq—most particularly Great Britain—would not support an attack on Iran.

That is precisely why the Bush administration is barking so loudly. It wants to convince the Iranian leadership that it is preparing to bite—to attack, invade, and destroy their regime, perhaps even with the use of tactical nuclear weapons. But it’s not working. It is only causing the Iranian leaders themselves to bark louder, to exaggerate their progress toward completing a nuclear weapon and to threaten terrorist retaliation by its suicide volunteers if Iran were to be attacked.

The war in Iraq is a two-edged sword when it comes to Iran. One edge demonstrates that the US is willing and able to topple dictatorial regimes that it regards as dangerous. That is the edge the Bush administration is trying to showcase. The other edge represents the failure of Iraq—widespread public distrust of intelligence claims, fear of becoming bogged down in another endless war, strident opposition at home and abroad. That is the edge being seen by the Iranian leaders. The US threat is seen as hollow.

That leaves the Israeli threat, which is real but limited. Who could blame Israel for seeking to destroy the emerging nuclear capacity of an enemy nation whose leader, as recently as 14 April 2006, threatened to eliminate ‘the Zionist regime’ by ‘one storm’—a clear reference to a nuclear attack.

These threats of a nuclear attack are being taken seriously by Israeli leaders, even if they are neither imminent nor certain. Israelis remember apocalyptic threats from an earlier dictator that were not taken seriously. This time those threatened have the military capacity to confront the danger and are likely to do so if it becomes more likely. Even if Israelis believe there is only a 5 percent chance that Iran would attack Israel with nuclear weapons, the risk of national annihilation would be too great for any nation—and most especially one built on the ashes of the Holocaust—to ignore.

The Iranian leaders understand this. They take seriously the statements made by Israeli leaders that they will never accept a nuclear Iran under its present leadership. They fully expect an attack from Israel when they come close to producing a nuclear weapon. Why then are they not deterred by the realistic prospect of an Israeli preemptive (or preventive) strike? For three related reasons. First, an Israeli attack would be a limited, surgical strike (or series of strikes). It would not be accompanied by a full-scale invasion, occupation, and regime change. Second, it would only delay production of a nuclear bomb, because it would be incomplete. Some nuclear facilities would be missed or only damaged, because they are ‘hardened’ and/or located in populated areas. The third and most important reason is that an attack by Israel would solidify the Iranian regime. It would make Iran into the victim of ‘Zionist aggression’ and unify Muslims, both inside and outside of Iran, against their common enemies. I say enemies because regardless of what role the US played or did not play in an Israeli attack, the US would share the blame in the radical Islamic world.

I am not going so far as to argue that the Iranian leadership would welcome an Israeli attack, but it would quickly turn such an attack to its advantage. If matters get worse domestically for the Iranian regime—if the nascent anti-Ahmadinejad ‘democratic’ or ‘secular’ movements were to strengthen—Ahmadinejad might actually get to the point of welcoming, even provoking or faking, an attack from Israel. This is why the threat from Israel will not work as a deterrent.

So we have two threats: one from a superpower—the US— that can but won’t bring about regime change. The other from a regional power—Israel—that may well attack but, if it does, will not only fail to produce regime change, but may actually strengthen the existing regime.

The Iranians will persist therefore in their efforts to secure nuclear weapons. Unless they are stopped or significantly delayed by military actions, they will become a nuclear power within a few years—precisely how many is unknown and probably unknowable. Armed with nuclear weapons and ruled by religious fanatics, Iran will become the most dangerous nation in the world. There is a small but still real possibility that it could initiate a suicidal nuclear exchange with Israel. There is a far greater likelihood that it could hand over nuclear material to one of its terrorist surrogates or that some rogue elements could steal nuclear material. This would pose a direct threat to the United States and all its allies.

The world should not accept these risks if there are reasonable steps available to prevent or reduce them. The question remains: Are any such steps feasible? Probably not, as long as the US remains bogged down in Iraq. History may well conclude that America and Britain fought the wrong preventive war against a country that posed no real threat, and that fighting that wrong war stopped them from fighting the right preventive war against a country that did pose a danger to world peace.
Though the doctrine of preventive war is easily abused—as it was in Iraq—sometimes it is a necessary evil. The failure of Britain and France to wage a preventive war against Nazi Germany in the mid-1930s cost the world millions of lives. Will the same be said someday about the failure to prevent Iran from developing nuclear weapons?

Alan M. Dershowitz is professor emeritus at Harvard Law School. “The Case Against the Iran Deal: How Can We Now Stop Iran from Getting Nukes?” is now available on Amazon!

About the Author
Alan M. Dershowitz is professor emeritus at Harvard Law School and author of “The Case Against the Iran Deal: How Can We Now Stop Iran from Getting Nukes?"
Related Topics
Related Posts
Comments