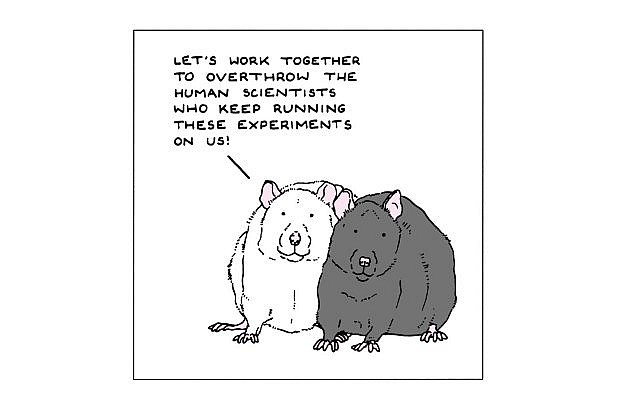 We can learn from the empathy of rats how to expand our own empathy. (Source: Henry Garrett, New York Times)

This Valentine’s Day, we can learn about loving our neighbors from watching how rats do it.

Anyone with kids in American schools knows that Valentine’s Day can be a pain. Modern American elementary schools insist that every student gives a valentine to every other student in the class. When this rule was first enacted, when I was in school, there was a lot of grumbling about having to give valentines to kids we barely knew. Today, my kids don’t think twice about it. Of course you get a valentine for everyone. And you go around and hand a card to every child in your class.

This practice teaches an important lesson. Everyone is worthy of your thoughts and consideration, whether you are good friends or barely know them. By asking our kids to think about and interact with the children they barely know, we are helping them to extend their connections to other people. We are helping them to become a little more familiar with all of the kids in their class.

The much-maligned rat is actually a paragon of social helping. Rats will even give up chocolate, which they love as much as we do, to help a cage-mate in trouble. However, rats won’t help just anyone. Who the rats will help, and who they won’t, turns out to be very interesting.

In a recent study, researchers used two common color-strains of laboratory rats, white rats and black-hooded rats.[1] They put two rats in a cage together: one free, the other trapped in a tube. The only way for the trapped rat to get out was for the free rat to open the door.

This behavior was not about racism, however. It was about familiarity. White rats that were raised by black rats were quick to help strange black rats and ignored strange white rats. They helped those that looked familiar. The rats helped other rats that looked like what they thought of as their friends and family.

More excitingly, housing rats with different colored rats changed their behavior even as adults. Adult white rats were housed for two weeks with adult black rats. The black rat grew into a familiar cage-mate: a friend, someone to be helped. But the change went beyond individual familiarity. Where the white rat would previously have left a strange black rat trapped, now that they were familiar with a black rat, they would help any black rat. All black rats now looked familiar.

By exposing rats to other types of rats, either as infants or as adults, we can expand their empathy beyond their own narrow tribe. If rats can grow in empathy, then so can we.

The problem of familiarity

Henry Garrett nicely summarized the lessons of this study for us: “It’s vital to recognize that prejudice is not baked-in: It is the result of our ignorance. A failure to learn about people (or rats) of different kinds can mean that we fail to recognize their pain as genuine pain. Empathy can be switched off.”[2]

David Brooks lays out the problem for us. “Americans tend more and more often to marry people with education levels similar to their own, and to befriend people with backgrounds similar to their own.”[3] People who are like us, who think like us and have similar backgrounds, are just easier to talk to. More comfortable. We like to be around people who make us comfortable, and that means people who are more like us. This tendency leads to unintentional segregation and tribalism. Not just by color, although that happens of course, but also by socio-economic class, education level, and belief system.

More and more, we are becoming unfamiliar with people who are different from us. The rats show us how important it is that we break out of those patterns. As Garrett pointed out, by not being familiar with people who are different, we fail to recognize their pain as genuine. We leave them trapped in their situation, because we don’t recognize them as worthy of our empathy.

This is not a conscious process, of course. No one looks at another person and thinks: That person is not worthy of my empathy. We just tend to ignore the issues that impact unfamiliar people because we don’t see those issues as important. We don’t see why we should care.

Breaking down our inherent tribalism is not easy. “What we are looking at here is human nature. People want to be around others who are roughly like themselves. That’s called community,” Brooks tells us. Trying to force diversity into every situation is unrealistic. However, the difficulty does not absolve us of the mitzvah[4] of extending our tribe beyond those who look, think, act, or vote like us.

There are ways we can increase empathy in our society. We can learn the lesson of our kids’ Valentine’s Day parties: spending a little time thinking about and interacting with people you barely know can expand your worldview.

In our lives, we run in many communities. Make sure that some of your communities include people who are different from you. Find ways to get to know many types of people. Finding ways to get to know people who are unfamiliar to you serves two purposes. It serves to expand your knowledge and empathy toward them, and it serves to expand their knowledge and empathy toward you.

Happy Valentine’s Day, everyone. Give a card to someone who voted the opposite way from you in the last election.

[2] https://www.nytimes.com/2018/12/28/opinion/empathy-research-morality-rats.html, which is a nice summary of the Ben-Ami Bartal article.

[4] Remember that mitzvah means not only good deed but also commandment.