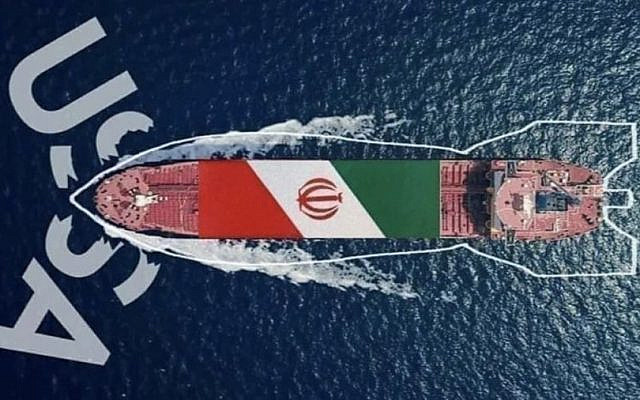 Iran Shows the Flag around the African Cape, the Baltic Sea, and the Mediterranean.

The game of chess may have been invented by the Persians. However, I prefer to quote a maxim from the game of basketball to describe Iran’s military activity: watch the game away from the ball! Players’ movements, feints, and maneuvers are essential features of both the defensive and offensive game.

Today, Iran’s two navies – that of the Islamic Republic of Iran Navy (IRIN), the conventional “blue-water” navy, and that of Islamic Republic Guard Corps Navy (IRGCN), an asymmetric, “green-water” force – are on the move beyond their standard areas of operation in the Persian Gulf and the Arabian Sea. After losing several ships in recent years to accidents and possible sabotage, the Iranians have now gone far afloat to the Mediterranean, West Africa, the Baltic Sea, and even a feint to South America. Naval mavens are scratching their heads over one set of Iranian ships loaded with oil that will approach Lebanon from the Suez Canal and another dawdling (as of August 25) outside the Strait of Gibraltar, possibly preparing to enter the Mediterranean to sail toward Lebanon. 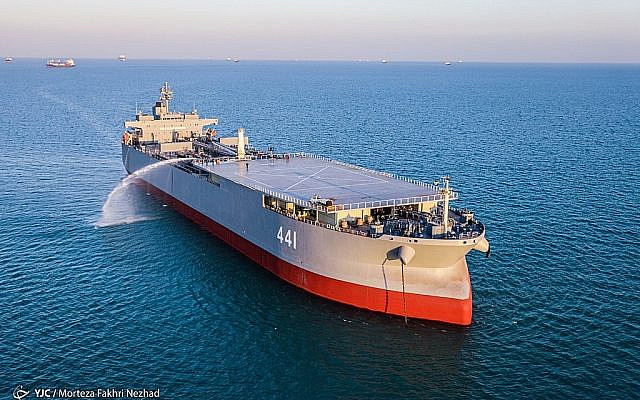 Will the two Iranian “flotillas” meet up in the eastern Mediterranean with their controversial oil shipment to Hezbollah in Lebanon and cargo of Iranian fast-attack boats, possibly for Hezbollah? 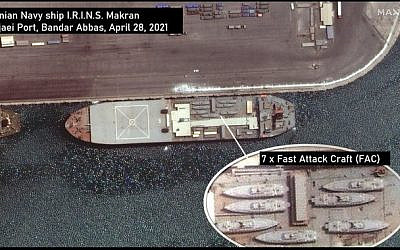 Seven fast boats lashed to the deck of the Makran, April 28, 2021. (US Naval Institute)

Flying the Iranian Flag in Denmark and Russia

In 2020, Iran refitted a massive oil tanker, the Beta, into a Forward Base Ship, launching and commissioning it as the IRIN Makran in January 2021. The multi-purpose Makran can serve as a logistics ship, a helicopter and drone carrier, a floating base for special forces, and transport for fuel, water, and food to support other ships far from home port. In its first significant deployment, the Makran, accompanied by the IRIS Sahand frigate, was loaded with seven fast attack boats, the type used by the Revolutionary Guards for “swarm attacks.” Iranian sources claim that the ship’s ability to carry 80,000 tons of fuel and 20,000 tons of water serves Iran’s “power projection.” At 230 meters long (750 feet), the Makran is Iran’s largest military vessel.

The two ships departed in May 2021 and rounded the Cape of Africa in June. Commentators speculated that Venezuela was the eventual destination. Instead, the ships sailed to the waters near the Strait of Gibraltar and turned off their automatic identification system (AIS) to hide their locations. When the ships were next seen, they were sailing through the English Channel and heading to the Baltic Sea on July 22. 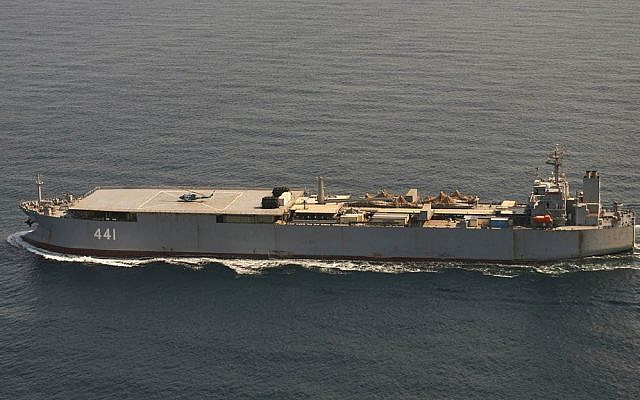 The Makran sailing past Denmark in July to Russia in July. The fast attack boats are under tarps. (Danish Armed Forces)

Finally, the ships arrived at the Russian port of St. Petersburg to participate in a commemoration of the 325th anniversary of the Russian Navy on July 25, 2021.

The Makran and Sahand began what appeared to be their return voyage, but, with their AIS turned off, they have not been seen by public sources since sailing off the coasts of France and Portugal. (Military ships have no obligation to keep their AIS turned on.) Several naval observers suggest that the Iranian ships may have sailed through the Gibraltar Strait into the Mediterranean during heavy fog last week or in tandem with Russian warships which “hid” the Iranians ships, but evidence is missing as of this writing. 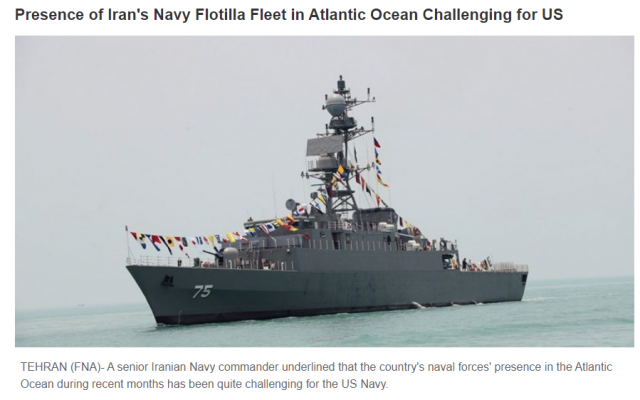 Iranian Fars News Service: “Today the mighty Iranian Navy is not only the guardian of the regional peace and stability, but also it has a strong presence in the Southern seas, in the Northern parts of the Indian Ocean and in the other international waters, and the mighty Iranian Navy and IRGC Navy have appeared mightily in the region,” said Rear Admiral Hamzeh Kaviani. “We are now present in the North Sea, the Gulf of Finland, and by the side of the Russian Navy, and this is proving our strength and grandeur in such regions as the Mediterranean Sea to the whole world,” he added.

The Other Flotilla – Iranian/Hezbollah Oil for Lebanon

On June 8, 2021, Hezbollah Secretary-General Hassan Nasrallah declared that his organization would relieve Lebanon’s catastrophic fuel shortage:  “We, within Hezbollah, will go to Iran, negotiate with the Iranian government… and buy vessels full of petrol and fuel oil and bring them to Beirut port,” Nasrallah said.

In a threat to Lebanon’s barely functioning government, he warned, “Let the Lebanese state (dare to) prevent the delivery of petrol and fuel oil to the Lebanese people! … We can no longer tolerate these scenes of humiliation.

To avoid US sanctions on Iranian oil sold to Hezbollah, Iran’s semi-official Nournews reported that the fuel shipments to Lebanon were purchased by a group of Lebanese Shi’ite businessmen. On August 19, Nasrallah vowed the first tanker would set sail. He warned Israel and the United States that after the sale of oil to Lebanese individuals, any attack on the ship would be on “Lebanese territory” and that Hezbollah would retaliate. The Hezbollah leader even escalated his threat to Lebanon, offering to bring in Iranian oil companies to explore for oil in Lebanese territorial waters. Considering that Lebanon and Israel have been negotiating over their disputed maritime border where commercial gas reserves are assumed, bringing Iran and Hezbollah into the exploration issue is a recipe for an explosion.

Nasrallah announced that the first ship for Lebanon had already sailed, but reliable sources report that as of August 26, two ships have not yet departed – one laden with fuel for power stations and the other carrying gasoline.

A senior Iranian spokesman made it clear on August 23 that Iran was prepared to sell more oil to Lebanon.  Iran’s Foreign Ministry spokesperson Saeed Khatibzadeh told a press conference, “We sell our oil and its products based on our own decisions and the needs of our friend. Iran is ready to send fuel again to Lebanon if needed. Certainly, we cannot see the suffering of the Lebanese people.” 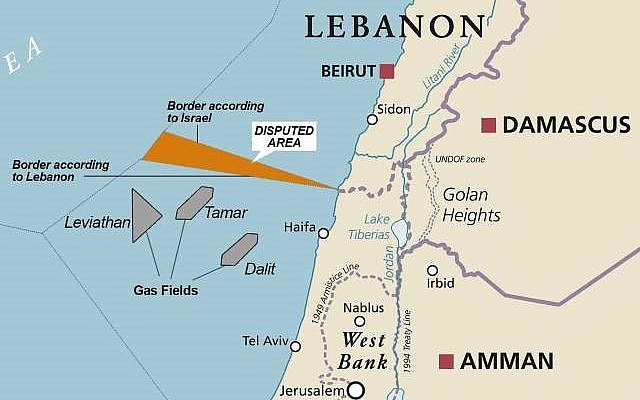 Lebanon’s two refineries, the Zahrani facility and the Tripoli refinery, stopped functioning more than 20 years ago. Until then, the installations were supplied by pipelines from Saudi Arabia and Iraq. Both still store imported fuel oil and gasoline and then treat and distribute these derivatives.  The storage facilities could be the destination for Iranian tankers, or the oil could be offloaded in Syrian ports. Would the Iranian oil arrive uncontested by Israel or Western countries? Or will the Iranian oil tankers be escorted by the Iranian warships, Makran and Sahand?

Opposition from Lebanon and the United States

Lebanese Sunni, Christian, and even some Shia leaders, however, are expressing opposition to the Nasrallah-Iran oil conspiracy and raising serious legal complaints. Former Prime Minister Saad Hariri charged that Hezbollah “is well aware that the Iranian ships will bring to the Lebanese dangers and additional sanctions similar to the ones imposed on Venezuela and other countries.” The Iranian/Hezbollah claim that the Iranian ship is “Lebanese territory,” Hariri continued, “is the epitome of squandering our national sovereignty and an open invitation to treat Lebanon as an Iranian province.”

Samir Geagea, a politician, militia commander, and leader of a Christian bloc in Lebanon’s parliament, is an unbending opponent to Hezbollah. He challenged Lebanon’s President Michel Aoun, who is aligned with Hezbollah: “Will you allow the party, which has usurped Lebanon’s strategic, military and security decision-making power, to now usurp its economic decision-making power, sweeping aside the Lebanese people and their interests and completely destroying the private sector?”

In July 2021, Iraq and Lebanon signed a barter deal whereby Iraq will provide Lebanon with fuel oil in return for medical “goods and services.” According to Agence France Presse, Lebanon’s energy minister, Raymond Ghajar, said the deal would allow “the purchase of one million tonnes of Iraqi state fuel oil on behalf of Electricite du Liban (EDL).”  The minister continued, “The Iraqi oil cannot be used directly by Lebanon’s power stations, so Beirut will continue to buy compatible fuel from other providers which will receive the Iraqi oil in exchange.”

Belatedly, the United States has entered the contretemps over Lebanon’s energy disaster. US Ambassador to Lebanon Dorothy Shea told Al Arabiya on August 19, “Lebanon didn’t need any Iranian tankers. She cited ‘a whole bunch’ of tankers off the country’s coast waiting to offload their cargo.” Shea discussed with President Aoun an American plan to relieve the Lebanese plight: “I’m trying to find solutions for the Lebanese people. We’ve been talking to the governments of Egypt, Jordan, the government here [Lebanon], the World Bank. We’re trying to get real, sustainable solutions for Lebanon’s fuel and energy needs.” Her plan reportedly would involve Egyptian natural gas flowing to Jordan to generate electricity that can be transmitted to Lebanon.

A cursory look at a regional map shows Israel located in the middle of those countries. Israeli natural gas from its Tamar and Leviathan coastal fields is a commodity supplied today – with no fanfare — to both Jordan and Egypt. In July, Israel’s Defense Minister Benny Gantz offered humanitarian aid to Lebanon through the United Nations. “My heart aches at the sight of the pictures of the hungry on the streets of Lebanon.” Israel is “ready to act” and provide humanitarian aid to the country, Gantz vowed.

Tragically, Israel’s offer will probably have no takers – at least not publicly or directly.