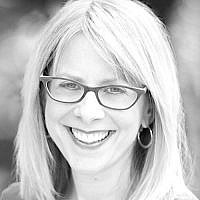 The Blogs
Abby Eisenberg
Independent Jewish Educator, Ever-Curious Learner & Teacher
Apply for a Blog
Advertisement
Please note that the posts on The Blogs are contributed by third parties. The opinions, facts and any media content in them are presented solely by the authors, and neither The Times of Israel nor its partners assume any responsibility for them. Please contact us in case of abuse. In case of abuse,
Report this post.

It has been a year like no other. Almost one year ago, I lost my father to complications from pancreatic cancer surgery. The surgery was successful, the tumors were removed, and the cancer had not spread. Weeks after his surgery, however, sepsis accelerated his physical deterioration and most unexpectedly, it took my father’s normal cognitive functioning from him.

I remember, like it was yesterday, the phone call with my father in the spring of last year. “Is everything okay?” I asked. “No,” he said, and proceeded to share his diagnosis.

I remember sitting with my father on his hospital bed, sobbing, in late April. Covid numbers were high, and although my mother, sister and I were fully vaccinated, we hadn’t been allowed to visit him in this suburban Detroit hospital. Out of nowhere, an angelic nurse allowed my sister and me to visit. “I know you are both from out-of-town,” she said.

I remember the last real conversation I had with my father on Sunday, May 30, 2021. I flew into Detroit for Memorial Day Weekend. I visited with my father in rehab before I returned to NYC. We talked open-heartedly about singlehood in my 40s. He let me tell him how important I thought mental health support was in his recovery process. We talked about each of our self-employed work lives. We schmoozed. I felt newly close to my father and I was certain that there were more tender conversations ahead.

By the time I was in Detroit on Father’s Day 2021, my father wasn’t the same. He was agitated. He was hyper-focused on shul (synagogue), Shabbos, yunteff (holidays) and getting out of the hospital. My father was an Orthodox Jew, deeply committed to his faith and practice. Religiosity, prayer and mitzvot (Judaism’s 613 commandments) were pillars of his life. As he began to detach from reality, he attached to the aspects of his life that were at his core and that had given him immense meaning.

When my father died in August of last year, just 10 days before Rosh Hashana, I knew I would say kaddish for him. I couldn’t imagine making my way through aveilut, the traditional Jewish year of mourning, without it. For the past 10 months, I’ve gone to shul almost every day, davened — recited one or more of the three required daily services — and said kaddish with other aveilim, mourners. In my home community here in NYC, I have been cradled by the voices of others that flow in and out of my own kaddish.

I don’t know if anyone can prepare you for the loss of a parent. The healing power of time is real, but living in a world without my father remains disconcerting and sad to varying degrees. This year, Father’s Day coincides with the 20th of Sivan on the Jewish calendar, which is exactly 10 months since my father’s death. Each monthly anniversary of my father’s passing has been a day with strong emotion. I’ve prepared for this Father’s Day, and although I am working, my work is deeply gratifying and I anticipate experiencing joy and connectedness throughout the day.

There are, however, quiet moments that feel disorienting and solemn. I cannot wish my father a happy Father’s Day but I can honor him by fulfilling the mitzvah of daily prayer and reciting kaddish in his memory. Today, as I enter into my last month of kaddish, I think of others experiencing the confluence of aveilut and Father’s Day. I wish each of us a day of resilience and ease, finding comfort in memories or rituals, bolstered by community, family and friendship.

About the Author
Abby Eisenberg is an independent Jewish educator based in NYC. As a Jew in the pew, she is deeply grateful for the rabbinic and communal support she was blessed to receive this year. As her father’s daughter, shul (just about anywhere) feels like a second home and she wishes that feeling for everyone who seeks that connection, whether in mourning, rejoicing, or regular day-to-day life.
Related Topics
Related Posts