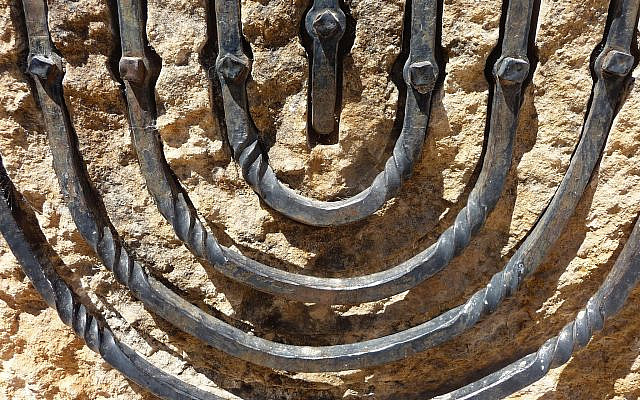 Did you hear the joke about the unlucky Jew walking in the desert who was set upon by a dozen vicious bandits? They beat him mercilessly and then buried him up to his neck in sand. They hit him even more and threw rocks at him. When one bandit ran by him too closely, the Jew quickly moved his head and managed to trip him and make him fall. The other bandits yelled out in outrage, ‘Fight fair, Jew, fight fair.’

President Joe Biden has granted that “Israel has the right to defend itself.” It turns out the United Nations charter grants to all nations this obvious and basic right of self-defense. Apart from “turning the other cheek,” any person or any sovereign nation would reflexively act to defend its citizens. So, while Biden’s proclamation is appreciated, it was minimal, it was not unequivocal, and it simply reflects the kinetic reality of thousands of incoming Hamas rockets fired from Gaza against Israeli citizens.

He OK’d Jews fighting to protect themselves.

The shrapnel from these Hamas rockets that tears Israeli flesh was bought and paid for with money from Iran. Gaza, because it has virtually no GDP, the imported rockets, launchers and considerable Hamas infrastructure – not hospitals, schools, or utilities – are made possible by the malign diversion of humanitarian aid and Iranian funds. Therefore, there is a direct financial connection between the monies paid to Iran as part of the 2015 JCPOA and Hamas’s store of weaponry. Negotiations, at Biden’s direction, to reenter the JCPOA taking place in Vienna, besides leading to Iranian nuclear weapons will likely include payoffs and more money for Gaza. Also, lifting sanctions placed on Iran by America over the past four years will amplify Iran’s terrorism against Israel.

President Biden should be commended for resisting the considerable anti-Israel pressure from his own party noisily petitioning for a premature ceasefire, for withholding purchase of armaments and for extending the malicious narratives that ignore the complexities and facts. He has also helped block the United Nations Security Council from interference. However, from his party’s far Left, he is badgered with a mix of woke narratives setting up Israel for moral equivalency and double standards. Besides the likes of Sanders, McCollum, Warren, the newly elected Senator from Georgia, Jon Ossoff, a Jew, is another self-loathing voice: “…To prevent any further loss of civilian life and to prevent further escalation of conflict in Israel and the Palestinian territories, we urge an immediate ceasefire.”

Here are other good questions for Progressive Jews: How much does the silent Chuck Schumer empower anti-Semites? Why does the oh-so woke Speaker Pelosi allow the Squad’s anti-Semitism and kufiyah wearing Representatives to condemn Israel?  And where is the outrage over the raft of anti-Israel personnel added to Biden’s Administration?

Since the early 1960s, Progressives have crafted a flimsy political mantra combining naïve socialism, universalism and feelings trumping facts. In spite of a long list of very bad actor nations perpetrating all sorts of criminal behavior, it is Israel, a democracy, that is somehow singled out for derision. This “Info War” as Caroline Glick describes is a witch’s brew made even more poisonous with the support of today’s powerful media and high-tech leaders. From the provocative comments of pundit Geraldo Rivera to entertainment elites like potty-mouth Sara Silverman comes dangerous moral equivalency and validation of the most libelous tales about Israel.

Today, of all of Israel’s enemies, the most dangerous and insidious threat is anti-Zionism replacing anti-Semitism. This sleight of hand justifies the Progressive Left to not pursue the facts and to not open eyes to the ramifications of their actions. While there is the “traditional” Right Wing anti-Semitism aimed more at the individual, it is this Left-Wing strain that creates the malign, intersectional alliance with geopolitical forces bent on annihilation of Israel.  The consequence, even if unintended, of this Jewish collaboration is troubling to the extreme and will come to haunt them.

In the 1957 David Lean film classic Bridge Over The River Kwai, Colonel Nicholson finally realizes his grave mistake aiding the wartime Japanese. He cries out, “What have I done?”

Israel can handle Hamas, Hezbollah and Iran and whatever else threatening comes along. The conflict between Hamas and Fatah will play out, and the struggle between Islam and the West will inch along. But loss of America’s alliance with Israel would be too much. Are the foolish Progressive Jews today’s enabling Kapos? Does their forgetfulness and capitulation signal to our leaders that Israel is not worth protecting? Do they facilitate violence on the streets of Jerusalem, Los Angeles and New York?

Will they too bemoan, “What have I done?”