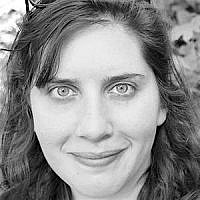 The Blogs
Dafna Laskin
Apply for a Blog
Please note that the posts on The Blogs are contributed by third parties. The opinions, facts and any media content in them are presented solely by the authors, and neither The Times of Israel nor its partners assume any responsibility for them. Please contact us in case of abuse. In case of abuse,
Report this post.

What a privilege it is to be an LGBTQ activist in America.

What a privilege it is, and how satisfying it must feel, to know that our needs as members of the LGBTQ community are so well-protected and respected across all 50 states that we must force ourselves to find causes elsewhere.

What a wonderful time to be involved in LGBTQ activism  in America, when your greatest foe is not discrimination based on your sexuality or gender identity, is not the elevated risk of homelessness and substance abuse and suicide that threatens the LGBTQ population, is not the rampant and deadly harassment of trans people. Oh, no. Your greatest foe as an LGBTQ activist in America is by far, without a doubt, an LGBTQ organization in a city 6,000 miles away.

Of all the dangers and threats discussed by LGBTQ activists at last week’s Creating Change conference in Chicago, your greatest enemy has emerged –  Jerusalem Open House, an LGBTQ organization that has never claimed to represent the Israeli government and its policies, whose funding comes exclusively from non-governmental and non-municipal sources, and whose leadership came under intense fire in 2014 for saying extremely unpopular things about Israeli politicians and soldiers during the war with Hamas.

Your greatest enemy is an organization that dares, in a city rife with division and extremism, to open its doors to any member of the LGBTQ community — Israeli or Palestinian, Jewish, Muslim, or Christian — and help them find a safe space to be themselves, regardless of their nationality or religion, cutting across social and political lines in the interest of all those who call Jerusalem home.

Your greatest enemy is an organization that helped found the first Palestinian LGBTQ rights group, because as an activist you know that homosexuality is illegal in Hamas’ Gaza Strip and cause for routine harassment, imprisonment, and death in the Palestinian Authority’s West Bank. As an activist you know that many gay Palestinians are forced to flee to cities like Tel Aviv and Haifa, where the LGBTQ communities welcome them into the fold without asking to see an identity card.

Your greatest enemy is an organization that helped its members cope in the aftermath of a horrific attack on Jerusalem’s Pride Parade last summer, in which a deranged extremist ultra-Orthodox Israeli man stabbed to death a 16-year-old Israeli girl who had come, as an ally, to show her support for the LGBTQ community.

Your greatest enemy is a group of people who happened to be born in a country whose settlement policies they did not create, whose political leadership they do not represent, and who, faced with intolerance in many corners of their own society, continue to forge a bright and vibrant community for themselves.

Your hatred of an entire nation is so strong, you will not ask yourself if stifling the voices of fellow activists, who fight daily for rights and recognition in an environment you only pretend to know about, is the wrong thing to do. You will not ask yourself if accusing your fellow activists of racism and apartheid simply because they share a nationality you despise is appropriate at a conference organized and attended by those claiming to fight for acceptance and tolerance. You will not bother to wonder, when you chant “From The River To the Sea,” what would happen to the thousands of LGBTQ Israelis and Palestinians who would surely suffer at the hands of a Palestinian nation intolerant of homosexuality, simply one more country in a world region where being gay or queer is grounds for the denial of basic human rights.

How lucky you are that no LGBTQ activists from Saudi Arabia, Iran, Yemen or Sudan were in attendence, otherwise you would have had to tire yourself out protesting their countries’ routine executions of homosexuals. How fortunate that there were no sessions run by activists from Libya, Morocco, Tunisia, Kuwait, Algeria, Egypt, the UAE, Syria, or Iraq, where the punishment for homosexuality ranges from fines, to legal action, to imprisonment and death. Or from China, Russia, North Korea, or Pakistan, whose human rights abuses would surely shock and appall those who claim to defend the oppressed. It would have been hard to organize your ignorant and intolerant slogans correctly.

Yes, indeed, what a privilege it is to be an LGBTQ activist in America. The prejudices and discrimination of yesteryear have been so completely eradicated, you must turn your focus outward, to alienate and harass people who seek a place to share their experiences, traumas, and despite all the odds, their triumphs.

What a blessing it is to have the power to harass a group of people based on an identity they did not choose, because you yourself have never known this very injustice.

About the Author
Dafna Laskin has worked in communications and social media for a variety of Jewish non-profits and publications.
Related Topics
Related Posts
Comments
Advertisement