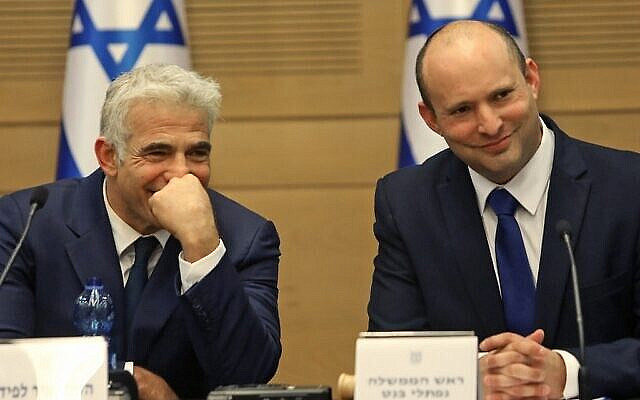 A void hovers over half of Israel: the vast expanse of time once devoted to complaining about Benjamin Netanyahu. One could write novels or complete advanced degrees with the hours now freed up.

In recent years, among certain Israelis, raging hatred for the prime minister filled all available conversational space. Awkward silence vanished as a concept. With Netanyahu gone, dinners with friends are once again a challenge, for man shall not live by bread alone; he also requires a nemesis.

Of course, even as opposition leader Netanyahu strives mightily to satisfy this  need:

Isn’t it amazing that he risked national security by denying successor Naftali Bennett a proper handover after ordering Likud Knesset members to hyper-heckle his inauguration day speech? Could they really have shredded reams of documents at the Prime Minister’s Office? Isn’t that illegal?? How absurd that he insists on still being called “Prime Minister”!

And how unbecoming to continue to machinate airtime with fake “important diplomatic announcements”! How pathetic is the insistence on squeezing a few more weeks out of the official residence in Jerusalem, taking maximal advantage of the beverage budget until the last conceivable second? Will they attempt to spirit away forbidden official gifts, as in 1999?

Each such little lunacy is a delicacy, no doubt. But one can also admit that as scandals none touches the incitement speech in court on opening day of his bribery trial or the stocks and submarines affairs, let alone the criminal cases that have him in the dock. With all due appreciation for Netanyahu’s continued service, the air is rushing out of this balloon.

What will come instead, for our dinner-table leftists? One can still complain about the Haredim and how little change the ”Change Government” will likely offer on that score.  Interior Minister Ayelet Shaked, clearly looking for trouble, may provide some raw material for recrimination. But it’s not at all the same.

A new paradigm may be needed. I suggest that instead of complaining about what is bad, leftists spend the time between courses contemplating what might turn out to be good. One can grow accustomed to such a thing. And there is a specific topic staring everyone in the face: What’s the story with  Bennett?

Could it be that Bennett will turn out to be more than just an ambitious cynic who sold out his principles in favor of extorting the prime ministership from Yair Lapid? Might he ideologically flip? Is it conceivable that he undergo the same psychological, ethical and intellectual journey as Tzipi Livni, Ehud Olmert and (in his way) Ariel Sharon?

There is some tension in such talk, because even leftists are Israeli enough to fear looking like the kind of suckers who believe a politician. But I’ll fearlessly dive in.

At first glance, the sea is the same sea and Bennett is the same Bennett. This is a guy who only weeks ago insisted he prefers a Netanyahu-led right-wing government, if only the prime minister could muster one.

But maybe there’s something more interesting here than merely a less annoying scoundrel?

Let’s start with the fact that Bennett is now on a kind of honeymoon with the left (or center-left, if you prefer). It’s not just that he’s not Bibi, or that he provided a boost to their side  (in exchange for half a kingdom). There is real sympathy at play.

I have studied Bennett’s teachings and conclude the problem is resolvable: he does seek partition from the bulk of the Palestinians but does not yet grasp that tiny, disconnected islands of autonomy will not alone achieve it. If only someone could be found to explain to him, slowly, with empathy, and using simple words, it’s possible he shall see. I’m counting on Lapid.

Yes indeed: Bennett could pull a Sharon. And in any case, I think in 2023 he will transfer the prime ministership to Lapid as promised, as if agreements are real and a word is a bond.

In general, there is something helpful in the fact that the Israeli right has gone straight off the rails. The sane members of the right now belong to the left, however, they deny it. Once upon a time, the left was the side that understood the occupation was bad for Israel; today the left is the side that understands that madness is bad for Israel. Let Avigdor Liberman, Gideon Saar and Bennett call themselves what they want – they are leftists.

And if all this is the case, then the crisis will exceed dinnertime conversation concerns. Leftists are losing something fundamental of themselves with the demise of their struggle against those who would ruin civilization. In the age of Netanyahu (and Donald Trump), some people became addicted to feeling superior and besieged. Can they live without it?

There is an argument for putting aside churlish, ungenerous thoughts. It may be the beginning of a healthier way of life.