Having just returned from a trip to Israel and more specifically, having just recently stood in Sderot where rockets struck a synagogue today, I want to say that in my opinion, it’s final notice time for Hamas. Their time is up. Zero tolerance moving forward. 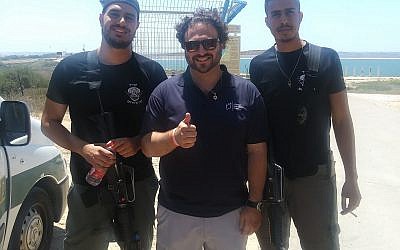 A picture with Israeli Border Police during a recent visit in Sderot with the Gaza border in the background.

I visited the Sderot Indoor Recreation Center that Jewish National Fund built because kids in the region could no longer play safely outside due to the constant fear of rocket attacks. In the town of Sderot, they have 15 seconds from the time they here the siren until potential impact. 15 seconds to run to a nearby bomb shelter.  Thankfully, the kids are laughing and playing again – thanks to JNF. However, it shouldn’t have gotten to this point that we had to built a 21,000 square foot rocket proof facility just so kids could be kids.

Hamas leadership has proven time and time again that they will never be a partner for peace.  They have sworn to annihilate Israel and all Jewish people. They send kite bombs into Israel to destroy Israel’s agriculture.  They spent millions of dollars to organize tens of thousands at the border for ‘peaceful protests” to fly Nazi Swastika kites and try to infiltrate Israel’s border.

Enough is enough!  It’s time for the people of Gaza to rise up and demand new leadership. Leadership that makes them a priority instead of calling for the mass murder of Jewish people. It’s time for new leadership that invests foreign aid money in Gaza infrastructure projects, creating jobs and providing running water instead of investing in Iranian rockets and underground terror tunnels.

When the people of Gaza decide to denounce Hamas, I think that Israel and Prime Minister Benjamin Netanyahu will be a partner for the people of Gaza. But until then, how can anyone expect Bibi to sit at a negotiation table with Hamas, who has made it their mission in life to destroy Israel, deny that the Holocaust happened and to brainwash their youth to kill Jewish people? Bibi is a strong leader who puts the safety and future of Israel and the Jewish people at the top of his agenda every day.  Imagine if Gazans had a leader like Bib?

In Northern Israel, there is a town called Acre. It’s a town where Jews, Muslims, Christians, Druze and Baha’is live side by side in peace. If they have peace in Acre, why can’t we have peace in Gaza?

I think the answer is obvious. It’s because of Hamas. Once Hamas is gone, then Israelis and Gazans will have a real chance to work towards a lasting peace deal.  Until then, it will be more of the same. It’s Final Notice Time for Hamas. Their time is up! I am calling on all Americans to speak up and show your support for our strongest partner in the Middle East, Israel.

I proudly say now and forever “Am Chai Yisrael” (The People of Israel Live).