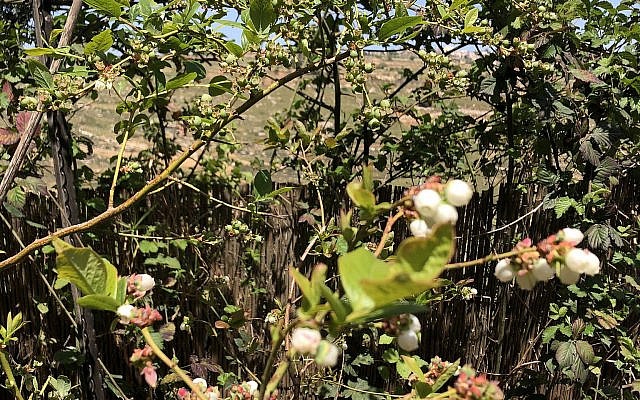 Winter in the middle of April? Passover was cold (and rainy) enough, but had Passover been just a tad later this year, these last few days would have gone down as one the coldest Passover ever.

On Shabbat, an arctic outbreak in north Central Europe helped push a trough of cold air southward into the eastern Mediterranean.  While a lack of humidity in the middle atmospheric layers limited the amount of precipitation, temperatures here in Efrat never reached above 7 degrees Celsius, and the strong winds dropped wind chills to just 2 Celsius.  The late-season and early spring cold has somewhat made up for the unusual late December and January warmth.

Fortunately, for those who have the sad task of visiting their loved ones on Remembrance Day, this Wednesday, the low will move away and a high-pressure ridge will replace it.  The high-pressure system will continue to intensify into early next week as low pressure builds to our west over southern Europe.  This means that Israeli Independence day should be a warm and nice day, but early next week could see the hottest temperatures of the spring, which will be more reminiscent of summer. The heat should break sometime mid-next week.

It’s been a while since I last wrote a blog.  True, the weather didn’t stop, but I’ve been unusually busy.  I had to spend a couple weeks in the US helping out at the old homestead, and then Passover arrived.  Quite frankly, we had a terrible time identifying and finding all the unleavened products in our home (“Chametz”), and eventually gave up and just sold the entire house. Fortunately, the contract sale was canceled shortly after the holiday ended…

During the last year,  I’ve been keeping track of a number of both intentional and unintentional statements that turned out to be false.

1) The Coronavirus first wave will pass — like all waves — and that will be its end.  It wasn’t (there are at least 4 distinct waves).  The assumption that the infection rate would be self-limited turned out to be false.

2) The Coronavirus will end this (last summer).  It didn’t.  In fact, one might argue that the wave-like pattern in the infection rate was a result of efforts to limit social interactions (i.e., lockdowns).  Unlike the Flu virus, hot weather appeared to have very little impact on the ability of the Coronavirus to spread and thrive.

3) By late September, the Coronavirus will be a past memory.  It is still quite in our memory.

5) The virus can mutate to protect itself from the vaccine.  In fact, the virus can mutate, but only incidentally through antigenic drift.  True, such mutations might render the vaccine less effective, but these are a result of chance rather than planning.  More importantly, if a person is vaccinated, and the virus is quickly killed by the immune system, it is very unlikely for that person to spread a dangerous mutation.

6) Young and healthy people are not affected by the Coronavirus.  In fact, while younger people are much less likely to die from the disease, a noticeable proportion has continued long-term symptoms.

7) Women of childbearing years should not get the vaccine.  Yet, new coronavirus variants have been especially dangerous, if not deadly to pregnant women (and their unborn child).

8) Taking Zinc and other “antiviral” medicines will stave off the Coronavirus.  In fact, commonly promoted treatments do not appear to help. While “strengthening” the immune system through exercise, diet, etc, is a good idea, the novelty of the coronavirus means that the immune system is not typically prepared to fight the virus until (in too many) it has the upper hand and causes serious illness.

1) The unusually cold and snowy February in the United States means that global warming is a falsehood.  In fact, cold air intrusions far south of the poles appear to have become more frequent as the world warms. The added (heat) energy to the arctic circulation has destabilized the polar vortex, making periods of unusually cold weather more prevalent (for the moment) than in the past. On average, though, the world is warmer than it was.

9) The United States should re-enter the Iran nuclear deal say 36 retired generals, security officials.  But what if nearly 50 times that say we shouldn’t?  They do. True, numbers don’t always tell the whole story, but sometimes policy is best made by consensus — especially when there are no hard and fast rules to follow.

So, where do these false or even silly ideas come from?  They usually come people who have a radical political agenda, and what better way to promote it than to get people to believe in a cause, even if false.  Usually, these followers have a strong belief that they are being lied to for ulterior and nefarious motives, or simply need to feel more in control or secure.  Conspiracists  are also people who seek publicity and followers simply by being contrary.  Sometimes, the best way to get noticed is to say the sky is falling, while sometimes it’s simply better to say it isn’t.

On the other hand, there is a lack of trust in news sources, which creates fertile ground for the conspiracists.  To limit the future damaging impact of conspiracists, newspaper and other news sources need to stop substituting opinion for news, and edit out those opinions based on made up facts.

We should all be well,