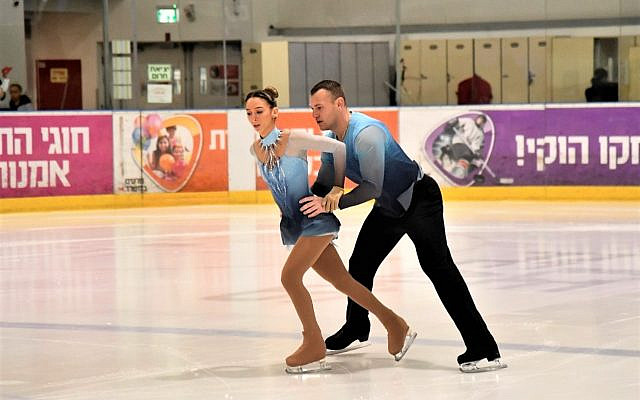 Last week, I read an amazing story, but it was a story that I had trouble processing because I was understandably torn. A 19-year-old young woman, Hailey Kops, was selected to represent Israel at the Beijing Olympics. Kops and her partner qualified for the pairs ice skating competition for the Olympics which will be held next February. The story was amazing for two reasons. First, the pair had only been training together as skating partners for three months and they finished ahead of some of the top skaters in the world to qualify for the Olympics. But it was amazing for another reason. Kops identifies as a Modern Orthodox young woman. Since she is Orthodox, if a competition is on a Friday night, she will only walk to the ice skating rink. In an interview, she explained that now, “it’s normal for me to keep Shabbat, keeping kosher, and it’s something I really want to hold on to.”

On the one hand, some of us are thrilled because one of “ours” made it. What does that mean? Well, Hailey grew up Modern Orthodox in West Orange and attended Kushner Academy. Here is someone who grew up in our broader modern Orthodox community who made it big and that instinctively gives us a sense of pride. It’s also very inspiring to see that someone who is committed to remaining an Orthodox Jew, despite its challenges, is achieving her Olympic dreams. In a Facebook post, her father clearly demonstrates that he is a proud Modern Orthodox Jew. He writes that he and his wife would allow his children to play sports on Shabbat, but would never allow them to drive or use their phones. He described how while they were at the Olympic qualifier in Germany, they even managed to set up a pop-up Sukkah. On Friday night, Hailey stepped on the ice for a qualifying skate while her father said the traditional blessing recited on Friday nights of “ye’simeich Elokim k’Sarah Rivkah Rachel v’Leah,” while his wife was saying Tehillim and they both recognize that it was all in God’s hands. A proud Modern Orthodox Jew raised in a strongly proud Modern Orthodox Jewish family achieved her dream without compromising her Modern Orthodox values. In a world where, according to a 2020 Pew study, 33 percent of Jews raised Orthodox do not continue to identify with Orthodoxy as adults, there is something very inspiring about this story.

At the same time, my struggle with the story is that I think that if you would ask your local Orthodox rabbi whether ice skating is a proper Shabbat activity, he would probably say no.  There might not be a technical halachic prohibition to ice skate on Shabbat, but the activity probably would fall under the grey area of activities that are “uvda d’chol,” or weekday activities that are not in the spirit of Shabbat. In contrast, Beatie Deutsch, Israel’s women’s marathon champion, does not compete on Shabbat. Even though running arguably may not be a technical halachic Shabbat prohibition, it would seem to fit under the category of “uvda d’chol,” as well. Many of us are aware of Jacob Steinmetz and Elie Kligman, two Orthodox Jewish players who were drafted this past year by major league baseball teams, but these two baseball players are taking different positions regarding playing on Shabbat. Steinmetz has said that he will play baseball on Shabbat but he will walk to and from the stadium, while Kligman has said that he will not play baseball on Shabbat.

It’s easy to be inspired by someone who is a superstar and could achieve even greater fame, but foregoes the fame because he or she will not compete on Shabbat. But what are we to make of those who clearly have made inspiring choices regarding Jewish practice when their choices fall short of what is standard Orthodox practice?

I think that the answer is that there’s a difference between being inspired by someone’s passion or commitment and modeling their behavior. Typically, if I view someone as a role model, I am inspired by a certain quality or character trait that the person possesses, and, at the same time, I am inclined to say that because this person is my role model, then I will emulate his or her behavior. In many instances, though, it is completely legitimate to be inspired by a person’s character traits and passion, but at the same time acknowledge that certain of his or her practices are not something that we as a society, whether it’s American society, Jewish society, or Orthodox Jewish society, should emulate.

The Mishna in Pirkei Avot states that we should judge others favorably. The Mishna does not tell us not to judge someone unfavorably; rather, it states that we must proactively judge others favorably. We have a responsibility to have an ayin tovah, to train our eyes to find the good or redeeming qualities in anyone and everyone. The pressure for an Olympic or MLB hopeful to not observe Shabbat at all must be tremendous. The fact that there are individuals who are passionate, committed self-defined Orthodox Jews, who observe Shabbat according to a particular standard is something that is worthy of praise. After all, who knows if we would follow that standard if we were in their situation?

At the same time, we cannot ignore the fact that observance of grey areas of halacha, such as Shabbat, is very challenging for the Modern Orthodox community. Observing the spirit of Shabbat, however that’s defined, is not custom, but it’s a firm halachic obligation. Using Shabbat as an opportunity to look inward, to strengthen our faith, and to reconnect with our family, ourselves and God should be our goal every seven days.

I consider myself a proud Modern Orthodox Jew. At the same time, I am aware that many Modern Orthodox Jews, heavily influenced by trends in the secular world, feel that it is their right to judge religious rules by their own subjective feelings and ideas. I do not agree with that assessment. I believe in more objective standards, even in the grey areas of halacha.  When it comes to Shabbat, deciding whether or not to wear dress clothes or play organized sports or go swimming should not be determined by one’s own feelings and ideas.

In light of this, I will say the following. I am inspired by Hailey’s Olympic and religious journey. Additionally, for all I know, perhaps she consulted with a halachic authority who ruled that in her particular situation, she may engage in ice skating competitions on Shabbat.  At the same time, I do not want my appreciation for Hailey’s commitment and pride in her Orthodox Jewish identity to be misconstrued as agreement that some of her Shabbat practices should be emulated by the Modern Orthodox Jewish community. And yes, I hope that she wins a gold medal for the State of Israel in the Olympics. However, as a Modern Orthodox Jew, I believe that I can embrace the complexity of her behavior, whereby I am inspired by her passion but at the same time hope and pray that our Modern Orthodox community chooses a different path in observing our Shabbat each and every week.