The Blogs
Scott Krane
a philosophe populaire, blogging about Judaism, war & the mimetic arts...
Apply for a Blog
Advertisement
Please note that the posts on The Blogs are contributed by third parties. The opinions, facts and any media content in them are presented solely by the authors, and neither The Times of Israel nor its partners assume any responsibility for them. Please contact us in case of abuse. In case of abuse,
Report this post. 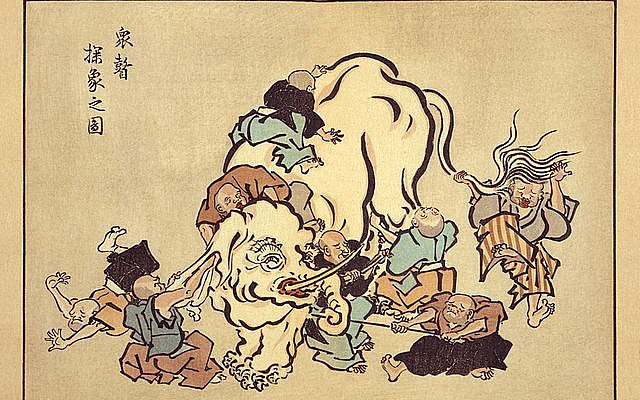 Once upon a time there

Was a sorcerer who wanted to steal all

Of the light on the planet.

He wore a crown made of

Rays from the sun.

He kept it all locked up in

A special room underneath his palace;

And for many years the planet went without light, until

Finally one day emerged from

The darkness, a fierce militia.

The whole time they had been

Hiding underground with a pack of

Elephants; living on rehydratable food and

Slowly gathering the strength to defeat the sorcerer.

They had dug all of the way to

The planet’s core, lowering the elephants down

Along with them; and there they gathered their energy.

Thinking about their beloved brethren, as

Any show of emotion would weaken their objective.

Finally, one day the militia created a

Device which shot all of the way back

To the planet’s surface, to the evil palace,

To the underground room, and even to the crown of the sorcerer.

After destroying the crown with

The very light which it served to absorb, they

Collected the recaptured rays, filled them in a giant

Stone box, and returned it to the planet, thinking that they would

Save whatever was left of humanity and nature above ground.

But they found it was already too late; and so

They saddled up their elephants and headed for the palace,

Thinking that the sorcerer would pose no threat without his crown.

What ensued was a melee, a fierce,

Fierce melee; The likes of which…

Matter to create weapons. The militia, using nothing but

Their bare fists were able to

Pin the sorcerer in

A corner of the room which

Had been previously used for storing the light.

“I see that you have successfully pinned me, perhaps I have underestimated your race,” said the sorcerer.

He put out his hand in

A show of peace when one of the militia

Men went to embrace it, but the head of the militia stopped him.

“You fool, he is trying to trick us!” exclaimed the leader.

And sure enough at that moment the sorcerer reached

For one of his ultraviolet guns and

Shot the one member of the militia.

But the rest of them jumped on

Him and seized all of the weapons; turning them

On the sorcerer, and putting him to death.

They hanged the sorcerer on the gate of

His palace and took turns defiling the corpse, as it

Swung back and forth.

Then they roasted it and fed it to the elephants, who were no longer vegetarians, upon the new dawn.

The militia rejoiced and

Began to procreate and build a new civilization. And

In time, with all of the light shining down on the

Planet once again, the trees and the forests began to grow,

New life was found, of course the elephants were

Honored by the people with the gift of

They saw the Blessings and

The Miracle which they had received and built an altar to

Worship the One True God

They declared  it a

Global holiday on the anniversary of

The sorcerer’s defeat and they sang this song:

SEE THE SPIRIT, FEEL IT IN THE AIR,

CALL IT YOUR OWN AND IT SHALL DISAPPEAR!”

About the Author
Scott Shlomo Krane has been blogging for TOI since February 2012. His writing has also appeared in The Atlantic, Tablet, Ha'aretz, The Jerusalem Post, the Daily Caller, Mic, JazzTimes and AllAboutJazz.com. Scott was a columnist and breaking news editor for Arutz Sheva-Israel National News (2011-2013). In addition to holding a degree in Judaic Studies and a Master's in English from Bar-Ilan University (for which he wrote his thesis on the poetry of American master, John Ashbery), he has learned Judaism at Hadar Ha'Torah Rabbinical Seminary in Brooklyn.
Related Topics
Related Posts
Comments